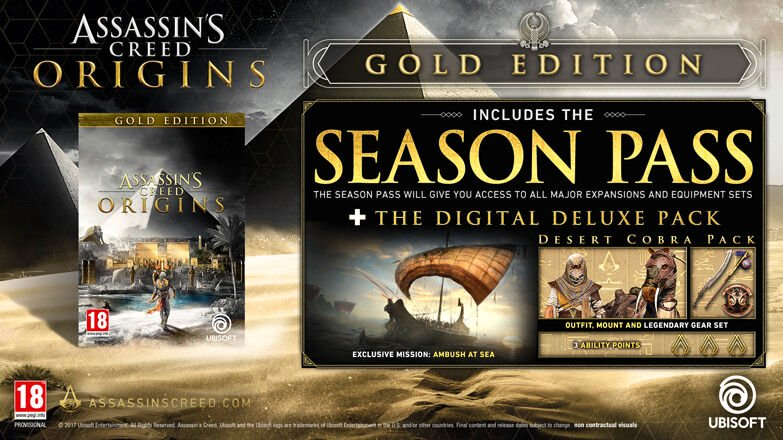 The GOLD EDITION includes the game, the Deluxe pack and the Season Pass, giving you access to two major expansions.

Promo Code:AUDIBLE20 before you checkout in your basket

and many more good offers

The Discovery Tour by Assassin’s Creed®: Ancient Egypt is available now as a free update!

Ancient Egypt, a land of majesty and intrigue, is disappearing in a ruthless fight for power. Unveil dark secrets and forgotten myths as you go back to the one founding moment: The Origins of the Assassin’s Brotherhood.

can you stack this with ubisoft points?

Didn’t this used to come with AC Rogue remastered?

What a waste of an amazing world when you have combat as bad as this... such a shame this could of been so much more, not sure why they have terrible combat with so many different weapons? Maybe they should of focussed swords only and made the combat a bit better :\

Im complaining and i paid 8 quid for the gold edition, if im moaning and paid 8 quid, you know its turd! and this is coming from someone who never put black flag down until i finished it!
Edited by: "Weehamish" 22nd Feb
22nd Feb

Im loving it right now, around 50h in, and enjoying combat and the world is breathtaking. Guess you don't like assassin's creed games, it's a love it or hate it gameplay
Edited by: "Ninhau" 22nd Feb
22nd Feb

I paid 30 and feel like I robbed them. Awesome game and a real turning point for AC. Loads of hours and quality dlc.
22nd Feb

Suppose you cant read? I literally said i never put black flag down until i finished it...

Combat is bad in this game. Bows 1 shot everything, melee is awful and i was playing on hard.