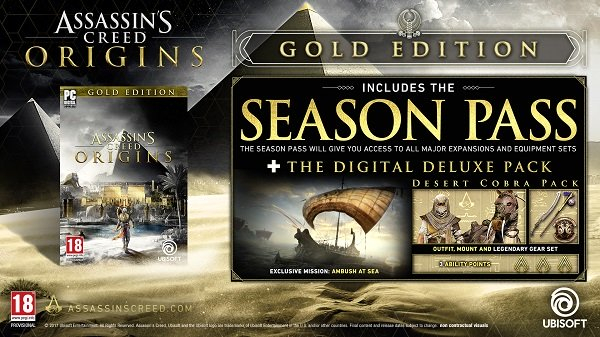 The GOLD EDITION includes the game, the Deluxe pack and the Season Pass, giving you access to two major expansions.

The Discovery Tour by Assassin’s Creed®: Ancient Egypt is available now as a free update!

Ancient Egypt, a land of majesty and intrigue, is disappearing in a ruthless fight for power. Unveil dark secrets and forgotten myths as you go back to the one founding moment: The Origins of the Assassin’s Brotherhood.

EMBRACE ACTION-RPG
Experience a completely new way to fight. Loot and use dozens of weapons with different characteristics and rarities. Explore deep progression mechanics and challenge your skills against unique and powerful bosses.
PostTweetShare Share with WhatsApp Share with Messenger
Community Updates
Greenman Gaming DealsGreenman Gaming voucher
New Comment Subscribe Save for later
3 Comments
19th Feb
I bought this during the epic store sale and got the gold edition for £9.50 or something like that and my god did i fall in love with this game. the combat feels awesome, traveling the world is just amazing because of how beautiful the world looks. i genuinely enjoyed traversing the world. the DLC curse of the pharohs was amazing, on my first playthrough i clocked in over 100 hours and unlocked all the achievements.
19th Feb

Can I ask you when was the epic store sale as £9.50 for the gold edition is a crazy price
19th Feb