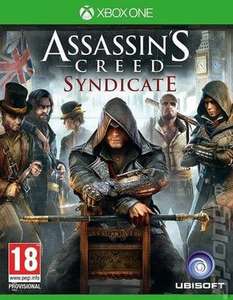 Sub £5 for the only Britain-based Creed chapter is a pretty good price, if you've waited this long and don't find them all highly derivative by now. Next best price is versus current selling price at CEX not including delivery. Hope it helps someone out though!

Since its beginnings in the era of the Third Crusade, the Assassin's Creed has been bearing down on the present day. Now it's reached what was arguably the dawn of the modern era - the industrial revolution.

The world is changing. No longer is the future of the world determined by blood, by kings and queens and lords and dukes. Now, capital is on the rise and those who control stand to profit greatly. Just as has been the case throughout the history of Assassin's Creed, however, there are those at the top and those getting trod into the dirt at the bottom. There are then templars and the assassins. And those at the bottom, the workers of industrial London serving as little more than slaves, are growing restless and forming gangs. Into this fray step twin assassins - Evie and Jacob Frye.

Ubisoft's London is suitably sprawling without becoming unmanageable. It's packed with period detail and famous monuments to see, but is contained enough that it can easily be crossed. The inclusion of an improved grapple helps, of course, as do vehicles (think Grand Theft Auto with horses).

Combat remains similar to that of Assassin's Creed Unity, centering on a countering system, but now comes with user-triggered executions and finishing moves. Another feature carried over from Unity is the option to upgrade and unlock skills and abilities, following an extensive skill tree system.

For the first time in the series, Assassin's Creed Syndicate features more than one protagonist. Players can switch at will between Jacob and Evie. The former is bigger and stronger, better suited to getting into a scrap. The latter is lighter and quicker and better suited to stealth.

All this comes, of course, with the series' trademark weaving of real history into the fabric of the story and, for example, Alexander Graham Bell takes on the role occupied by Leonardo Da Vinci in Assassin's Creed II.