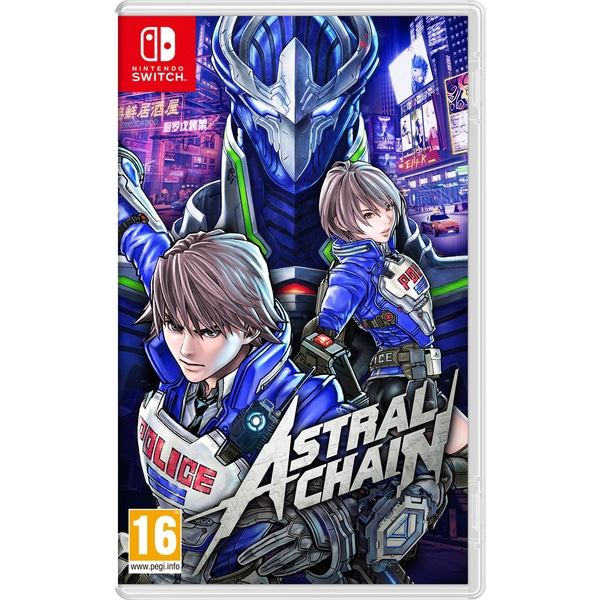 Available for Click & Collect from quite a number of stores.
PostTweetShare Share with WhatsApp Share with Messenger
Community Updates
MODERATOR
9th Dec 2019
Product Description
Humanity’s last chance against an interdimensional invasion is a special living weapon called the Legion. As a rookie officer in the elite police task force Neuron, you and your Legion will work together to solve cases and save humankind.
The ASTRAL CHAIN game gives you full control over two characters at once for thrilling Synergetic Action, courtesy of PlatinumGames. Alternate between several Legion types and skills to save the world your way.

Features
Smyths Toys DealsSmyths Toys discount code
If you click through or buy, retailers may pay hotukdeals some money, but this never affects which deals get posted. Find more info in our FAQs and About Us page.
New Comment Subscribe Save for later
23 Comments
8th Dec 2019
Nice! It was this price on Black Friday but seemed to vanish straight away. Looks like they got a restock.
8th Dec 2019

Is this a good game, what does it fetch second hand?

this is produced by the same studio of Nigeria automata and bayonetta. and the music composer is the same of nier automata. the action is the first of its kind for an action game, very refreshing. the character designer is the comic book artist who is best known for I''''S. many gamers rated it an S tier game, i think you won't regret it.
9th Dec 2019

Have you played the game?

yes I did on my friend's switch. I want to buy one for myself. and I played all of the other games of the same studio (platinum studio)'
9th Dec 2019

Aside from the description on who made the game, what did you think of it?

Because personally I found the story to be pretty lackluster and predictable when compared to prior titles under the same company and I found the gameplay to be very watered down in comparison to other games.

I also disagreed with the combat being based mostly in the barren and uninteresting astral plain, in comparison to the shortly lived beautiful environments which you could only visit for 10 minutes tops.

I also disliked how repetitive it seemed as if you've played the game for 3 hours, you've pretty much seen it all

I had my expectations unable to be met with this and my 25 hours of gameplay only had me questioning why I wasn't playing Nier Automata or even Bayonetta
9th Dec 2019
I only played for about 1 hour on my friend's console and the action with the chain feels fresh for me (I have played many many hack and slash games, and hard core action game like shinobi, nijia gaiden, etc), I have my expectation quite high for this actually and I am searching for deal to buy a copy for my self.
Based on what I played, I would think that this game seems to be in between nier automata and bayonetta in terms of story-action balance (bayonetta is slash and shoot for the fun, nier's story is the most appealing part for me (three playthroughs is a must. I felt shamed to not delete my save file to help others).
I hope my impression is not wrong, at least the action feels fresh for me. I also have a try of the OST on youtube, and it feels good to me, although not as stunning as in nier automata. But I must admit I think it will be very hard to pass Nier automata in terms of story, or bayonetta in terms of pure action. Its aim for the studio is a trial for new types of action.

And I have to say Nier automata is really up there on top of my list of favourite games. It is a perfect game for me, and I have start playing games since gameboy.
9th Dec 2019
Jz managed to get ao.com to match this. So free delivery for me
9th Dec 2019

Jz managed to get ao.com to match this. So free delivery for me

I just have an online chat with Ao.com and they said they cannot price match this item as it is out of stock for home delivery at Smyths. How did you manage to do it?
9th Dec 2019

Is this a good game, what does it fetch second hand?

Must have got lucky with mine. I rang up and at first they won't do it as it's not in stock for home delivery and suddenly he said he'll check again with a supervisor and he came back and said they will do it.
9th Dec 2019

I decided to give it a try to call after the online representative reject the request. And they decided to match it over the phone! I think it must be your pursvasive skill that impress them so they are willing to help me on it as well. Thanks a lot:)
9th Dec 2019
None in the the Durham branch
9th Dec 2019

None in the the Durham branch

You can try ringing up Ao.com to price match it. Justin89 and I both got our order matched over the phone. Tell them that you see the post here that there are others who has been offered the price match, even though Smythstoys does not have stock for home delivery. They took your order on the phone, the whole process took about 7 minutes in total.
9th Dec 2019
Good game.... Love the combat system..the story is kinda a bit meh.. But still ok... If u play god eater and stuff like that things like this get repetitive.
9th Dec 2019
Thanks for posting and a belated welcome to hotukdeals. We have added your thread to the Highlights section
9th Dec 2019

Thanks Andy - I've actually been on here years but somehow lost my login to my old account. Previous best effort ended at about 87 degrees so I'm glad they liked this one!