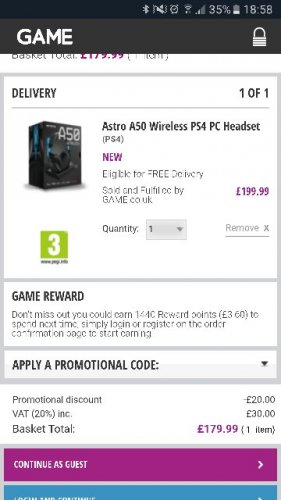 OOS (Both Xbox One and PS4 versions)

10% off voucher is likely expired now too. I can't seem to expire the deal via the mobile app though.

Got these a few weeks ago from Game for 199.99 and they are worth every penny.

I haven't had the best history with Astro. Had the first gen A50, and they weren't great, so switched to other brands. Tried the TR for my Xbox one and they were good but my sennheiser blew them away.

Went back again and tried the A50 2nd gen but they would freeze up on me and I had to drain the battery before being able to charge and use them again.

After several headsets between then and now, I saw these advertised and read reviews and they all said they had fixed all the issues. Well, glad I tried them because they are gorgeous. Completely wireless on PS4, drop them on the dock and they charge up, audio is stupidly good. I'm pin pointing people all over in cod and battlefield and I can even judge of someone is above or below.

This isn't gonna be a heatwave, but if you've been after these, then 180 vs there RRP of £249.99 is a great price.
PostTweetShare Share with WhatsApp Share with Messenger
Community Updates
GAME DealsGAME discount code
If you click through or buy, retailers may pay hotukdeals some money, but this never affects which deals get posted. Find more info in our FAQs and About Us page.
New Comment Subscribe Save for later
40 Comments
7th Jan 2017
Code for discount is "GAME2017" and works on all accessories on the Game website so if you're after anything else, give it a try.
7th Jan 2017
except they're sold out literally everywhere for xbox ones
7th Jan 2017
Yeah, I think the fact so few headsets are fully wireless without a chat cable required, they'll be pretty damn popular
7th Jan 2017
Lots of complaints about the xbox one version microphones
7th Jan 2017
Which sennheisers do you have?
7th Jan 2017
Wow! and here I am reluctant to spend £15 quid on a cheap PS4 headset on Amazon, almost tempted to use the rubbish one I got with my slim, I didn't even know there were ones this expensive.
7th Jan 2017
great price! ive got the Platinums pre ordered for later this month though. looking forward to trying this new 3D audio Tech
7th Jan 2017
Skullcandy Plyr1s all the way, such a shame they're so hard to get hold of now. Basically the same specs, fully wireless with chat, and made by the same company (Skullcandy own Astro). £150 they cost me and well worth it if you can get em.
7th Jan 2017

At first, I get that this would be someones attitude about buying headsets at this price range however consider the fact you would of paid roughly £400/500 for your 1080p TV which provides a great viewing experience but then you buy a cheap headset with sub par sound - people forget that when it comes to games / movies etc, sound should be considered equally as important.

I don't have these headsets, but I spent roughly the same on my mine and I don't for a second regret it.

I understand not everyone has the budget to get 3 figure headsets but I would reconsider your choice when looking at the very cheapest.

I think I only paid around £160 for my Bush 1080p TV I found on this site a few years ago lol. I'm kinda glad I'm not an audiophile but that's not why I didn't want to spend money on my PS4 headset, I just don't really need a gaming headset and hate the idea of buying one specifically for my PS4. Luckily I recently found the 3.5mm jack on my dual shock 4 lol so will spend some money on decent headphones and a microphone that I can use for everything.

Which sennheisers do you have?

​The Game One open backed. With the TR mixamp, they are an incredible combo. But I really wanted wireless, and these tick all the boxes.
8th Jan 2017

​Mate you have literally took the words out of my mouth.

People buy these nice TVs and then either play with a rubbish headset or worse, the TV speakers themselves.

Now I know everyone can't go to this level immediately. I started out with the Turtle Beach X1s around 8 years ago, and since then, I've owned around 30 headsets/headphones just to try different options.

Even if you are on a budget, HyperX have the striker or the cloud, which will give you a good experience.
8th Jan 2017
I hate the fact that the PS4 won't allow game audio to output to headphones and HDMI at the same time. (For recording using a capture card.)

I'm with you in part but I'd only argue that, for me at least, the distance between screen and machine is that close that considering £180 wireless headsets is more of a "nice to have" than anything.

I use what was once a £80-90 wired headset and it does fine but just isn't wireless. I'd prefer wireless of course but I guess what I'm getting at here is not everyone really needs to spend £180 to get the best sound to compliment their screen. Totally agree that sound is just as important as picture though.
8th Jan 2017

You should get some A40's. They're wired but use optical and have a great little mix amp with them that even allows you to plug your MP3 player into it so you can have your music and game sound all come through together. The TV sound also still works when I'm using them.
8th Jan 2017

Lots of complaints about the xbox one version microphones

Fixed via firmware update in November.
8th Jan 2017
Shame no xbox version in stock. Was watching some used but mint ones on ebay yesterday and they went for £220 and I'm not paying that lol
8th Jan 2017

If you have a £90 wired headset, its probably pretty good anyway :). I was just meaning that some people buy essentially cheap tat for sound and 10 fold on their TV - which isn't what you have done.

I play Rainbow Six Siege on PC and I've never had a game which makes having a decent headset more worthwhile, as being able to hear (and the location of that noise) is in some parts more important than being able to see!
8th Jan 2017

Trust me, I'm not an audiophile either (I don't think one would touch a gaming headset with a barge pole!), I only PC game as well. My Logitech G933 7.1 headset works on PC, Xbox and Playstation wirelessly and then has a 3.5mm for everything else (don't tend to use that bit). However I use this headset for everything from gaming, movies, music and even phones calls!

I think on the console market, you guys are a bit more limited.
8th Jan 2017

Fixed via firmware update in November.

​People are still complaing even with that update
8th Jan 2017

​Siege is the perfect example of needing excellent sound quality (with the ability to hear positional cues) over visual fidelity.

The amount of times I get the jump on an attacker coming near a door or window, and me being able to pre aim ready.

I love the fact this headset gives me those cues and all in a lovely wireless package.

I really liked the look of the Logitech headsets, but it's crap that the consoles don't allow a small driver install to allow the surround sound.
8th Jan 2017
I have Astro A50's. How do I know which gen I have?
9th Jan 2017
there's a set of white a50s on backorder available from Amazon for £135. I'm guessing those are an earlier generation as they don't have the charging cradle. can anyone recommend whether they're worth getting?
9th Jan 2017

​Hi mate, stay away from those. They are the ones with the broken firmware. They freeze up and you can't physically turn them off as the off button doesn't respond. You then need to let them drain, which can take all night, then you can charge them up again. You can take a chance and hope you get a decent unit but I wouldn't if it was me. If the wireless isn't an issue, I'd go for the Astro A40 TR on Amazon for 160 instead.
9th Jan 2017

​The Gen 1 came in Black with a small hint of red, and they released a Battlefield special edition. The Gen 2 came in various colours made for Xbox or PS4. So you had black with blue for PS4, and then white with green, black with green and a halo special edition for Xbox one. The Gen 2 versions for Xbox came with an Astro chat cable for chat to the xbox the controller.
9th Jan 2017
I have the PS4 platinum headset on pre-order but was looking for a decent set for my Xbox. I'm also keeping an eye out on the Logitech G933 so now not sure what to buy or ignore..... Thoughts?

​If you want wireless surround for the Xbox you will need to take the Logitech off your wanted list. Unfortunately the surround sound is driver/software based, so is only available when connected to PC.

The Xbox version of the Astros is the best option as yet. Tritton have a set called the Katana but there is a cable required for chat audio.

If you aren't in a hurry, Lucidsound are going to be bringing some officially licenced headsets for the Xbox One but could be waiting a while.

If you can get these A50s for nearer 200 quid I can honestly say if you want excellent sound and comfort, they are perfect.
9th Jan 2017
Thanks.... I was this close to buying the Logitechs this morning.... I'll hold off and watch prices for the A50s for now
9th Jan 2017

​You should try your local stores for Game. I know the price for the A50s (both xb1 and ps4) were 200 straight in the shops. The website is never that accurate for me.
9th Jan 2017

I've had the G933 since Oct 2015, I'm on my 4th pair from RMA (although they let you keep the others). The hardware itself is good but was let down but crap software. The problem with my 4 (the mic kept getting software stuck in mute) has been fixed so my mates all have the same headset now ;).

Are these really better than AKG's and Fidelio X2 etc ?

​Probably not, especially if your pairing those with an amp or a good sound card in a PC, but these are a wireless gaming headset with Dolby headphone for surround sound, and have a nice charging dock. Depends what you're looking for.
10th Jan 2017

I believe Astro are bringing out a new base station for the Gen 3 A50's so that if you have the PS4 version you'll be able to use the headset on Xbox and vice-versa. I think around £100 has been mentioned for the new base station.
10th Jan 2017

I have noticed that Astro have increased the price on the A50 Gen 3s. They are now £280 in most places. Do you think they are still worth it at that price? I was hoping for a sale but it seems like the price on them is trending up instead of down.
Edited by: "SandorClegane" 28th Jan 2017
28th Jan 2017

​No I don't think they are worth 280 tbh. They are brilliant but I don't think any headset is worth that kind of money. I think 250 is still a bit steep. The charging dock was the feature that interested me most, but 200 is the max I'd pay, especially when you can get the Lucidsound LS40 for 180 or the Sony Platinum for 130. I owned the LS30 and they were gorgeous, look sleek, all metal design and sounded amazing, so I can only image the LS40 with DTS will be better again.