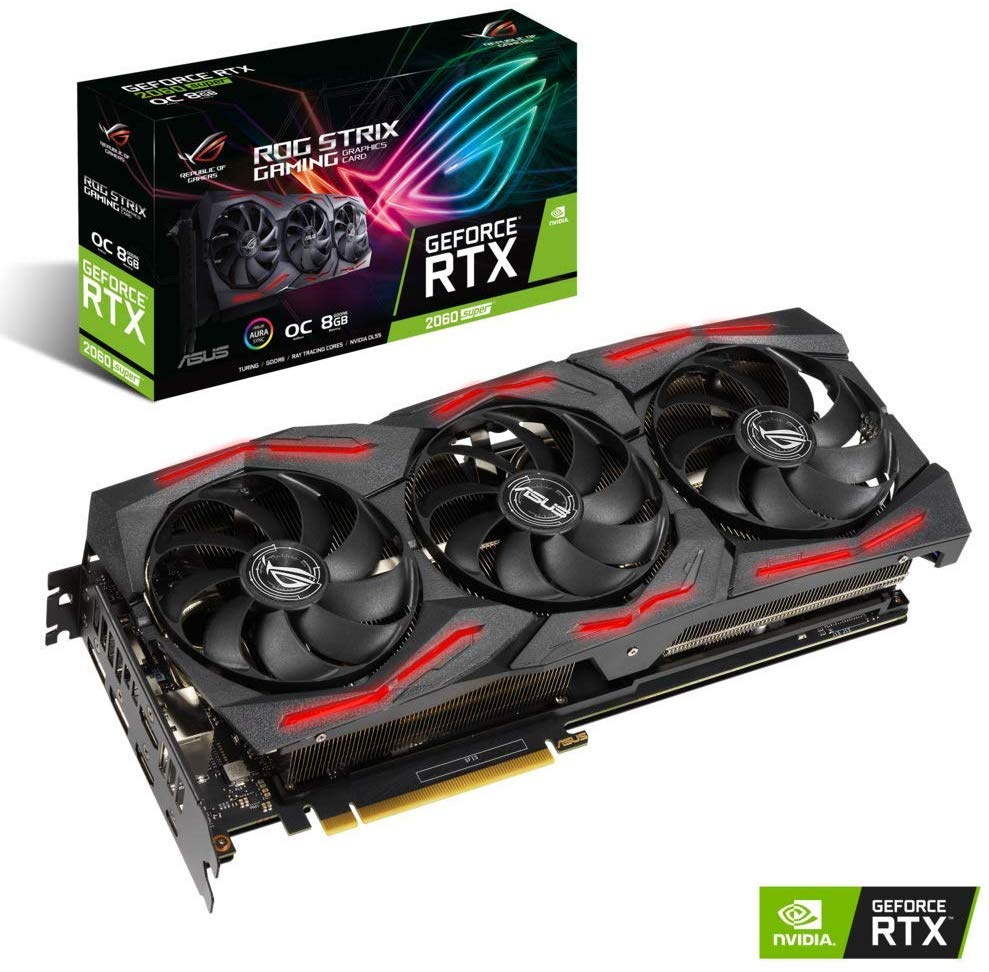 if your not bothered about wait time, then this is a cracking deal for this version of card

PostTweetShare Share with WhatsApp Share with Messenger
Community Updates
Amazon DealsAmazon discount code
If you click through or buy using any of our links, retailers may pay hotukdeals some money, but this never affects which deals get posted. Find more info in our FAQs and About Us page.
New Comment Subscribe Save for later
120 Comments
3rd Jan
I can't wait for these cheaper amd equivalents to hit the streets
3rd Jan

Oh right so it's the mobile one that's not out yet. I've been out of the loop with desktops cus I've been searching laptops only.
3rd Jan

K I'd better hold fire then I guess.
3rd Jan
5700xt can be sometimes snagged for similar price, can't really say if this is a deal.
3rd Jan

Great another Nvidia £1000+ GPU and AMD the same old story

Intel potentially releasing something too. AMD might be releasing a much more powerful APU. Even if AMD and nVidia do little with their flagship cards the prices might shift a fair bit.
3rd Jan

Great another Nvidia £1000+ GPU and AMD the same old story

AMD is not expected to be the same old story. Their share price is now at an all time high based on 2020/2021 expectations to Intel & Nvida (consumer and server side).
3rd Jan

Something from Intel would be interesting
3rd Jan

prices won't shift. they are already overhoarding 2080ti chips no one wants to buy.

new cards will keep same price as prev generation or even drop in price.

no one will fall for same joke 2nd time a row.
3rd Jan

really? the 2060 super is better in nearly all tests ive seen
3rd Jan
This is the card I've had on my pcpartpicker list. £100 cheaper is a cracking deal. I'll order this and it gives me time to figure out the rest of my build. The case is my problem area at the mo. Too much choice and looking for a case with reasonably good noise reduction and good airflow.
3rd Jan
5700XTs go on sale for pretty much same price give or take £10, but this is still a good deal if you're looking for a 2060super
3rd Jan
How fast is this card?
3rd Jan

How fast is this card?

Fractal Design Meshify C has good air flow(damn and for some reason double the price it use to be). Look for something with a mesh front.
Edited by: "garybb" 3rd Jan
3rd Jan

really? the 2060 super is better in nearly all tests ive seen

Where? The Verge.
3rd Jan
It would be better to put of any graphic card upgrading until later in the year.
3rd Jan

yes the 5700xt verson is closer maybe a little better than the 2060 super, but the 5700 xt as known issues, one being overheating when playing games, and also driver issues, which for me as put me off that card personally

"The reference 5700 XT is great for beating benchmarks, but it is not so great for playing games. Thousands of people purchased the reference card expecting flagship performance, instead they got a shopping trolley with a V6 engine."

that's to name just a few reasons why most are put off with the 5700 xt range at the mo
Edited by: "n1ttygr1tty" 3rd Jan
3rd Jan

I read or watched somewhere recently that as the GDDR6 VRAM that is being used for new GPUs is going to be in high demand there may be price rises similar to the Bitcoin mining recently. The new Xbox's and Playstation will be using this as well which is what will really be pushing things. Bigger price drops might not happen until that demand plateaus.
3rd Jan

I do like mine. Got it for 50 odd around December from ebuyer.
3rd Jan

Price of GDDR6 won't have a significant toll on the price of the cards, because the price for cards is FIXED for another 2-3 years. Fluctuations will be severe but once the dust settles down there is no room to make a adjustments due to "high RAM demad" that's not how MACRO scale work of this industry.
Nvidia will determine RPP and the rest will stick to it. Approx margin on single card sold Founders Edition is 20-35% per card.
So you can estimate yourself how much money they make. The more expensive the bigger profit margin is.
3rd Jan

So, essentially better. But you pay more.
3rd Jan

Unpopular opinion though this may be - give RTX more time. Allow developers time to do something with the technology. And surely if the RTX cores are surplus then there will be a patch to turn them into more standard graphics processing power.
3rd Jan
RTX is just a gimmick right now. This card wont be able to hold its own even in RTX games as it just doesnt have the power.

Sorry, I dont see this as a good deal unless you are happy to pay the Nvidia tax.
4th Jan
I'd rather pay a few quid extra for a much better card with more reliable drivers and less issues with high temperatures anyday, and also future proof my gaming.with the 5700 u dont

Also some 5700 cards are MORE expensive than the 2060 supers ,which makes this an even better deal than amd
Edited by: "n1ttygr1tty" 4th Jan
4th Jan

some people work with CUDA cores such as I do. It's not always about gaming alone.
4th Jan

Absolutely, if you working using CUDA cores, then the 2060 is great. Apologies.
4th Jan
Given cyberpunk should have decent raytracing features built in and I really want to play control with ray tracing on, a RTX card is tempting.

This card won't run RTX well enough to be worthwhile. Even 1080p with RTX would be struggling a bit for decent framerate.
Think pistol with a sniper scope levels of pointlessness.
4th Jan

I am not a massively competitive gamer so just going to be looking for 1080p60 but yeah it looks like this card struggles with Control with raytracing features on. Rockpapershotgun says it gets 51 fps at 1080p.

I might try to hold off to the next gen of rtx cards at least I know what cyberpunk needs. Also depending on what build I stick the gpu in, I might be power constrained.
4th Jan

£800?another DOA on arrival?casus Radeon VII.

Sorry to be clear that would compete with the 2080ti and that is about £1,000 most places so it will be competitive but knowing AMD, they will find a way to mess something up.
4th Jan
With new consoles on the horizon, we are due a generational leap for PC graphics cards that should be able to maintain a better 4k performance. Defo holding off for a year on graphics cards. My 1070 will do fine til then for 1440p content.
4th Jan
The 2060`s or S model, just are not worth it any more with the new gen out later this year just to expensive.
4th Jan

you;ll be paying a premium even when those comes out