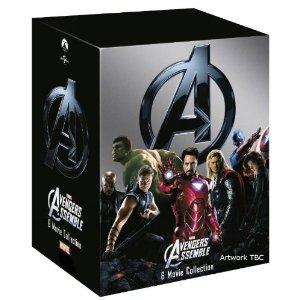 Tesco are doing 15% off any pre-orders, which seems to be the best price for this at the moment.

Use code 15PREORDER at the checkout to get the lovely discount.

Don't forget those clubcard points and maybe even Quidco!

Billionaire industrialist and genius inventor Tony Stark (Robert Downey Jr.) is kidnapped and forced to build a devastating weapon. Instead, using his intelligence and ingenuity, he builds a high-tech suit of armor and escapes captivity. When he uncovers a nefarious plot with global implications, he dons his powerful armor and vows to protect the world as Iron Man.

After a gamma experiment goes awry, the brilliant and mild-mannered scientist Dr. Bruce Banner (Ed Norton) finds himself with a peculiar condition. When angered or provoked, he transforms into an uncontrollable green-skinned monster. Hunted by a secret military force, Banner desperately searches for a cure to the gamma radiation that has poisoned his cells and created his alter ego known as the Hulk.

With the world now aware of his dual life as the armored super hero Iron Man, billionaire inventor Tony Stark (Robert Downey Jr.) faces pressure from the government, the press, and the public to share his technology with the military. Unwilling to let go of his invention, Stark, with Pepper Potts (Gwyneth Paltrow), and James ""Rhodey"" Rhodes (Don Cheadle) at his side, must forge new alliances -- and confront powerful new enemies.

The heir to the legendary throne of Asgard, Thor (Chris Hemsworth) is a brave but restless warrior who longs for glory and the rush of battle. Armed with the mighty hammer Mjolnir, he is nearly unstoppable with the weapon in his hands. When the arrogant prince is banished to Earth from his homeworld of Asgard, he must fight to reclaim his lost powers. Pursued by an enemy sent to destroy him, the fallen God of Thunder must rise to battle and learn what it takes to become a true hero.

Steve Rogers (Chris Evans) came of age in an era of global turmoil, and despite a bevy of physical deficiencies, he wanted nothing more than a chance to serve his country. Recruited for a top-secret program by Dr. Abraham Erskine, Steve’s frail body was transformed into the ultimate super-solider, the powerful and heroic Captain America. Now the world’s greatest hero, he wages war on the evil HYDRA organization, led by the villainous Red Skull (Hugo Weaving).

When Nick Fury (Samuel L. Jackson), the Director of an international peacekeeping agency known as S.H.I.E.L.D., encounters an unexpected enemy that threatens global safety and security, he finds himself in need of a team to pull the world back from the brink of disaster. Spanning the globe, a daring recruitment effort begins for Earth’s mightiest heroes. Iron Man (Robert Downey Jr.), Captain America (Chris Evans), The Incredible Hulk (Mark Ruffalo), Thor (Chris Hemsworth), and two of the world’s greatest assassins, Black Widow (Scarlett Johansson) and Hawkeye (Jeremy Renner), must assemble to defeat Loki (Tom Hiddleston), the darkest villain the Earth has ever known
PostTweetShare Share with WhatsApp Share with Messenger
Community Updates
Tesco Direct DealsTesco Direct Discount Codes
New Comment SubscribeSave for later
55 Comments
23rd Jul 2012
3d versions of the ones that came out in 3d ?
23rd Jul 2012
Could have got it for £9 @ Asda last week due to price error...which they have confirmed to honour that price
23rd Jul 2012

3d versions of the ones that came out in 3d ?

Nope, standard 1 disks of all films I believe
23rd Jul 2012
Missing one Hulk movie and the good one reminds me that Ed Norton was missing from Avengers.

That one has nothing to do with this series
23rd Jul 2012
Is it individual cases?
23rd Jul 2012
Thanks for the heads up on this. I had missed previous deals so have snapped this one up
23rd Jul 2012
Also 8% quidco too at the moment (can't find anything about excluding pre-orders)
so that will be another £2.70 off the price.
Always had good Quidco tracking with Tesco Entertainment too.

How do you know this?

I spoke to a representative on the phone and they said it will be honoured...for this @ £9 and the single movie on blu ray, someone else confirmed here:
hotukdeals.com/dea…e=7
23rd Jul 2012

That was just the Avengers film, but not this box set

Thanks. That sounds very promising.
24th Jul 2012
ok price, but i will always stick with the steelbooks, this is ok for plastic fans of the marvel series - no bonus discs and features, no 3d for those into that fad, just bog standard blurays. this set wont increase in value. here are the values of the steelbooks

Edited by: "fuzzydunlop" 24th Jul 2012
24th Jul 2012
Good offer - though I'd rather own the films individually than a box of discs. Thankfully, I already own all of them on blu-ray (except Avengers Assemble of course)

Always regretted selling my Battlestar Galactica season collections for a "Complete Collection" boxset, which had none of the character of the ones I sold :-(
24th Jul 2012

'Plastic Fans' made me lol

Owning the Steel Book statistically makes you 75% more of a fan. I bet you didn't know that

Get yo' facts right man
24th Jul 2012
Cheaper than my Sainsbury's deal posted a few weeks back so cancelled that and pre-ordered from here. Thanks OP!
24th Jul 2012

What is this then? hotukdeals.com/dea…356
Thats right....Get yo' facts right man
24th Jul 2012
anyone know if telco entertainment take money on dispatch with a pre-order?
24th Jul 2012

There was a similar deal not long ago with a misprice of the Blu Ray of the Avengers Assemble film.

I would question your use of the word value‌ ‌ Cost may be a better word.
24th Jul 2012
Seems a shame to even release a blu ray version which doesn't include the 3d copy IMO, it can always be shown in 2D anyway. Oh and lol at 'plastic' fans above, what a tit. It's not fine wine, these will get re released umpteen times + produced in their millions, nobody buys blu ray discs as an investment.
24th Jul 2012
Im hoping that they release the boxset with the case and teseract here in the UK. Stupidly tempted to get it.
24th Jul 2012
Well looks like I’m a ‘plastic fan’, I didn’t know there was a term for it, I thought we were known as ‘normal people’.

I like the films but don’t currently own them, so figured I’d pick them up at around six quid a film. I’m unlikey to have a 3D TV for a few years and as much as the special features would be nice to have I never watch them anyway…. Crazy logic I guess...

I can’t be bothered to cancel my Amazon pre-order but this is a great deal.

Surely "real" Marvel fans would buy a nice affordable boxset and then spend the difference on a couple of complete runs of Avengers based stories? Try and feed a few of your hard earned £££ into the livelihood of the writers and artists that continue to make comics great instead of splitting it evenly between Disney and Robert Downey Jr
24th Jul 2012

I have the original Iron Man steelbook (US version), and I do have it in bubble wrap still sealed, and its worth £150-£200. But keep up those smart arsed posts, I do enjoy laughing at people every now and then.
24th Jul 2012

Oh I do like laughing at people who embellish the truth
Edited by: "feeder16" 24th Jul 2012