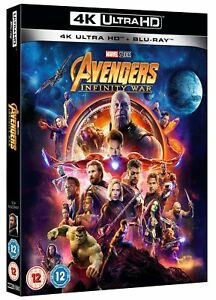 Thanks cbr6fx for opening the gate. Cheerz..

Avengers Infinity War (4K Ultra HD + Blu-ray) [UHD]An unprecedented cinematic journey ten years in the making and spanning the entire Marvel Cinematic Universe, Marvel Studios’ “Avengers: Infinity War” brings to the screen the ultimate, deadliest showdown of all time. The Avengers and their Super Hero allies must be willing to sacrifice all in an attempt to defeat the powerful Thanos before his blitz of devastation and ruin puts an end to the universe.
PostTweetShare Share with WhatsApp Share with Messenger
Community Updates
EBay DealsEBay discount code
If you click through or buy, retailers may pay hotukdeals some money, but this never affects which deals get posted. Find more info in our FAQs and About Us page.
New Comment Subscribe Save for later
9 Comments
1st Jan
‌ ‌
1st Jan

They won't get them, bulk buying.
1st Jan

They also bought loads of End Game
2nd Jan
Misprice they won’t honour it
2nd Jan
OOS
2nd Jan
Yea I was thinking about getting lost complete blu ray for £13.99 thinking to myself that's a bit low since people are right now bidding up to 20-30 pounds checked now something like £53.99 think it was mis print or new years day only deal but the seller has really bad feedback on not sending items out is why I did not pull the trigger last night! Gud for them that get theres if they do!
Edited by: "Rick312" 2nd Jan
2nd Jan

Excellent, well said.
3rd Jan
Just had the e-mail, cancelled! Nevermind was worth a punt and nothing lost