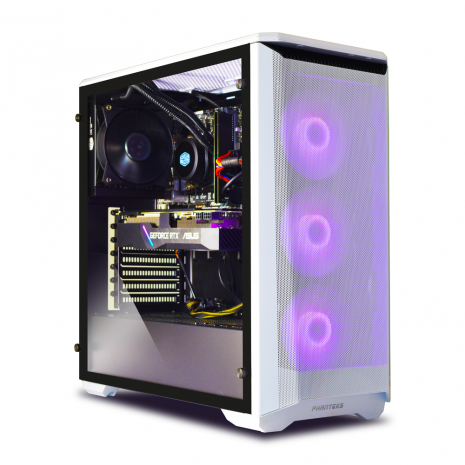 i have just gone and found a nice 3600x / 5700xt on another link which ive just posted.
(details at the bottom)

however they have gone and updated this one:

With this one, I cant give direct links to my chosen selection.

So i am going to choose and change what i can in the drop downs to show a good nice deal.

nip on the website and change it to the following to see what ive done:

if you want information the 5600xt its here:

I have expired it, its under this link.. that was yesterdays deal, this is now todays deal..
(u cant have more then one thing pointing at the same link, and this has new things on it.)

so uve got a nice £855 package which includes windows,

Pros (other link)
Much better PSU.
Better Motherboard to a degree.
£20 saving towards a NvMe which i removed would be +23 higher then the above.

#im not going to get in to case wars here.

end of the day, im not buyer, you are, youve got some nice selections, given u some good choices, off you go and u pick. and its not hard to do windows yourself the reason i remove the nvme out the other were cos the lower one cost £24 time u updated to 240gb nvme it was another £27.. which is £52 and for £60 u can get a nice 500gb.. so id go for that if it were me of the little freedom and psu.. .. for someone who wants windows installed this is a fine dandy deal..

3600x Get a choice of Borderlands* or Outwords FOC. &
Get 3 months Xbox Pc Pass (includes outworlds*)

5700xt Get a choice of Borderlands or Ghost Recon* FOC

*Best way to redeem to get all 3.
PostTweetShare Share with WhatsApp Share with Messenger
Community Updates
AWD-IT Deals
New Comment Subscribe Save for later
24 Comments
24th Jan
Heat for the effort and I am sure this will be of great use to someone in the market for a gaming PC.
24th Jan
This is a great spec for the price heat added.
24th Jan
If my CPU is hitting 100% in games (and the game stutters) and my GPU is pretty much 100% will I have to replace both to get stutter free gaming (other than reduce quality).
24th Jan

At any point in time your CPU or GPU will be the bottleneck (otherwise all games would run at infinite FPS). What is your current GPU and CPU, and what games are you trying to play?
24th Jan

I3 6100 and rx470. Was considering going for a gtx1660super (sub £200) but if the i3 is still going to be pegged at 100% I’m not convinced the GPU will help much. I have been considering going AMD (2600x) as I loathe having to buy new motherboard just for a CPU upgrade so AM4 will probably offer better longevity. But that means new CPU, new GPU, new MOBO etc so it’s getting pricey.
24th Jan
The prices of these has been slowly creeping up. I specced a build just before Christmas (without sale prices). All components are around 10% more expensive. More significant increases are in the SSD and RAM. CPU prices have fallen.
24th Jan

We had similar thoughts! Indeed, a 6600K overclocked would be cheaper and similar performing compared to a 6700, and in some cases perhaps even beat the 6700.
Edited by: "Scottc123" 24th Jan
24th Jan

It's amazing how well these old Intel chips still do in modern games: 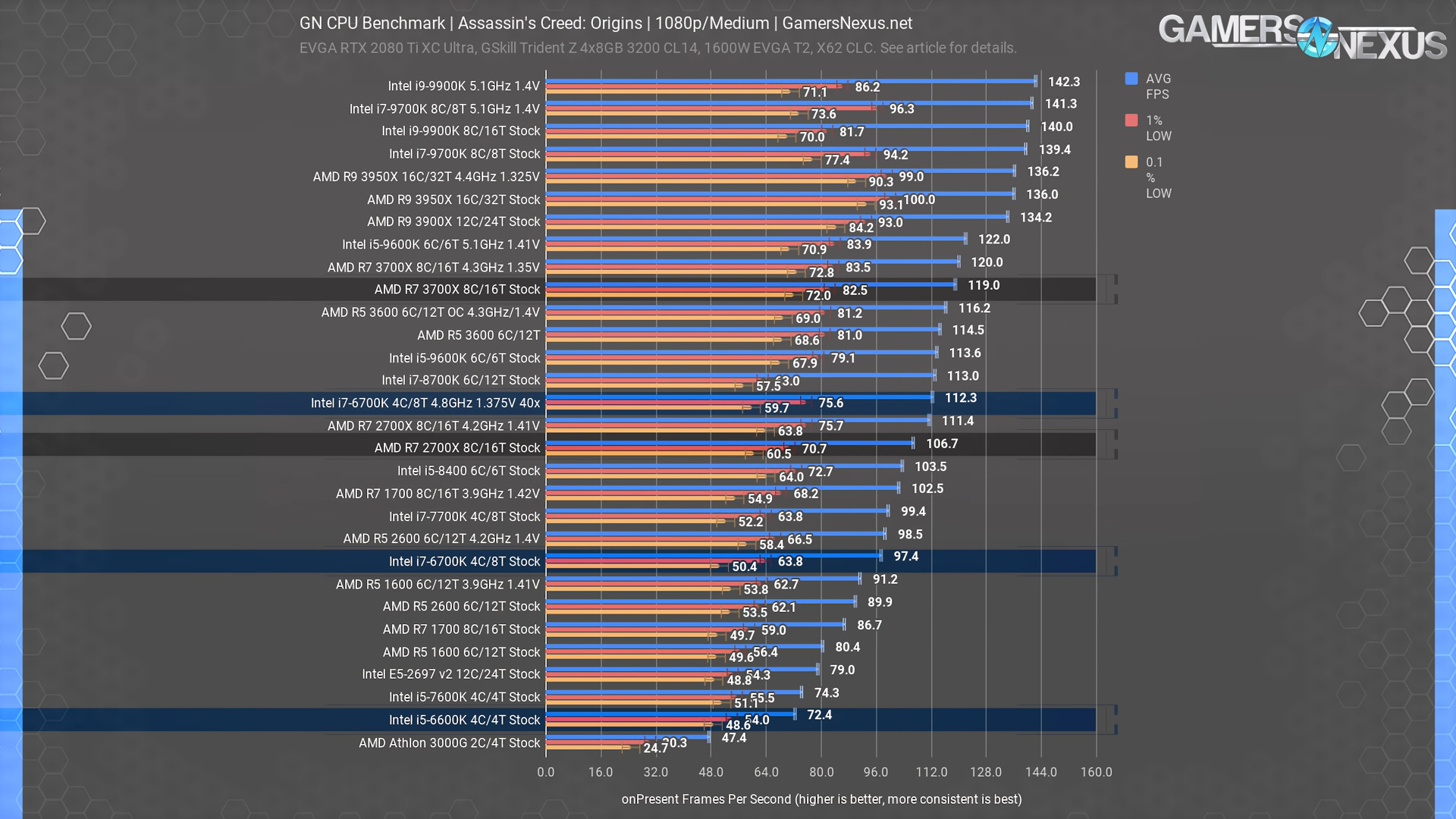 24th Jan
@Scottc123 and Gormand (can’t tag you for some reason), thanks for the advice. Mobo doesn’t allow oberclocking so may look at the non K chips. Glad I didn’t rush out and spend on a GPU in the first instance as may as been disappointment. I only game at 1080/60 and with Jedi Fallen Order I’m still CPU usage of 100% with frame drops. Nothing else using the CPU in task manager so I think it is just a limitation of the chip. I’ll check out CEX today thanks.
24th Jan

Yup, I'm still on a 4790K @4.9 GHz running a 1080Ti, been getting the upgrade twitch, but single core performance of my CPU still beats the new AMD chips. I get occasional stutters in CPU heavy games (due to lack of threads), but an upgrade to faster memory 2400 MHz @CL10 and that has smoothened things up. I'm stuck on DDR3, but for someone on Skylake6XXX architecture can also upgrade DDR4 speed (if motherboard supported). The DDR4 could also be rolled forward to any future AMD AM4 upgrade. Indeed, a 6700K will beat even a 3700X in some games: forums.anandtech.com/threads/6700k-vs-3700x-in-23games.2567554/
Edited by: "Scottc123" 24th Jan
24th Jan

Cool. Consider that the K versions, even if not overclocked often have ~200 MHz higher boost clocks than non-K variants (and higher resale value). For most games, single thread speed is most important, but newer games are increasingly dependent on number of threads (Assassin's Creed games being particularly thread-hungry). Check benchmarks for the games you play. Enjoy and good luck with the upgrade.
24th Jan

Yeah most issues you have will be due to only having two cores, a four core CPU will provide a massive boost in FPS. In the case of the 6600 vs 6600k they both have a 3.6GHz boost so either will be fine if you are not overclocking.
Edited by: "Gormond" 24th Jan
24th Jan
Tempted. Been a while since i had a gaming PC, think i need to do some more reading before taking the plunge. Some PC only exclusives have been catching my eye so really close to going for it!
24th Jan

Which ones?
24th Jan

If the stuttering is gone then that's a win. You'll still be CPU bound if you have the graphics settings lower than they could be, or if you are running at high refresh rates. If you have a high refresh monitor you could cap at something higher than 60fps to keep frame rates more consistent.
30th Jan

Yeah it’s definitely a win. It’s one of those situations of whether the win was worth it for the price or it I should have stretched a little further, although the i7 was double the price. I only have a 60fps monitor anyway. Still get stutters on Jedi fallen but looking around the net so do people with high end systems so seems software issue - I can at least play in epic though which I couldn’t do so far. I went to test COD but it needed a 40gb patch which is still downloading. Grid 2 which I play now and then looks great in ultra which I could run before. All in all I’m pretty happy with it. It would have cost me £225 by the time I get ride of the rx470 and the i3
30th Jan

Not bad, considering that you've doubled both CPU and GPU performance for £225!
4th Feb
TY OP, got this instead of one of the ccl's u posted as i ordered that early last month and when i called yesterday said it would arrive 14th feb.