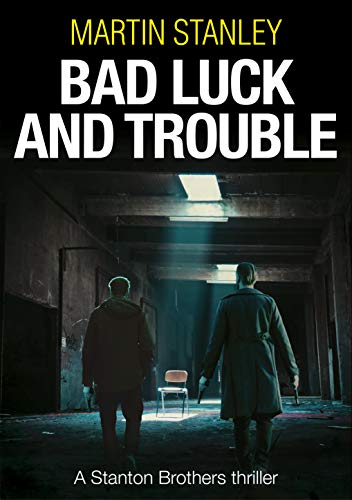 Bad luck and trouble are their business. And business is booming…

When armed robbers deprive Eric Stanton of his boss' ten grand, he knows he is in big trouble. If he can't find the money before the end of the day, his vicious loan shark boss will demand he repay the debt – or take his kneecaps instead. Neither option appeals to him.

Once Eric realises that the robbery is part of an elaborate setup and he's the fall guy, he does the one thing he can think of to even up the score and brings in his brother, Derek. What his man-mountain brother lacks in brains, he makes up for in muscle and brutality; just the right kind of partner for a trip around the seedier parts of Teesside.

Who stole the money, and why? And can they get the money back before the deadline runs out? One thing's for sure, the Stanton brothers won't go down without a fight.

Set within the rough, post-industrial landscape of Teesside, this fast-paced British crime thriller will keep you gripped until the brutal, action-packed finale.

Originally published as 'The Curious Case of the Missing Moolah'.
------------------------
WARNING: CONTAINS VERY STRONG LANGUAGE AND VIOLENCE THROUGHOUT. NOT FOR THE EASILY OFFENDED OR THOSE OF A SENSITIVE DISPOSITION.
PostTweetShare Share with WhatsApp Share with Messenger
Community Updates
Amazon DealsAmazon discount code
If you click through or buy, retailers may pay hotukdeals some money, but this never affects which deals get posted. Find more info in our FAQs and About Us page.
New Comment Subscribe Save for later