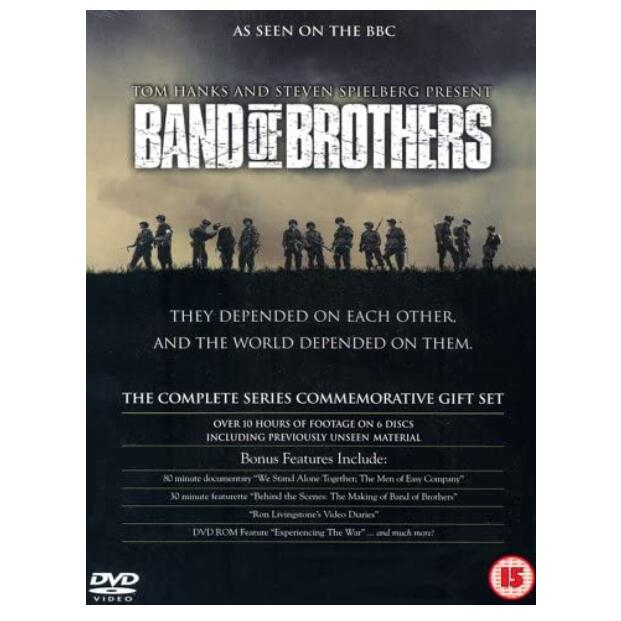 matwalaboyExpert (Beta)27
Posted 24th May 2021
Arguably one of the best series ever made, the 6 disc commemorative gift set can be picked for a good price, cheaper still if its your first order with the code WELCOME10.

Description
A genuinely epic achievement, the 10-part World War II drama Band of Brothers is a television series that makes big-screen Hollywood war movies look small in comparison. Based on the book by historian Stephen Ambrose, the series follows the US 101st Airborne Division's "Easy" E-Company from initial training through D-Day and across Holland, Belgium, Germany and Austria until the end of the war. Coproduced by Steven Spielberg and Tom Hanks, the series take its initial inspiration from Saving Private Ryan and borrows that film's visceral visual approach to combat scenes using hand-held camerawork and de-saturated photography. But where Band of Brothers excels is in its scrupulous attention to the realities of military life (retired US Marine Captain Dale Dye, who also co-stars, is the man to credit).

After the high drama of the parachute drop on D-Day, Easy's greatest trial comes during the Battle of the Bulge, when they are besieged at Bastogne in the depths of winter. In one of the most harrowing and credible depictions of war ever committed to film we see the men enduring the repeated artillery attacks of the German forces and experience, if only vicariously, some of the sheer terror of the assault, while being humbled by the soldiers' courage and determination. Such feelings are enhanced by the series' masterstroke--bookend interviews with the surviving members of Easy Company, who talk with barely suppressed emotion of the experiences we see recreated. The endorsement of these veterans elevates Band of Brothers beyond any mere "war film"--its extraordinary achievement is that it shows the horror and savagery of war without gloss or jingoism, and yet celebrates the fraternal bonds and dogged heroism of the men who fought.

On the DVD:
Band of Brothers arrives handsomely packaged in a six-disc box set with two episodes on each of the first five discs. Sound (Dolby 5.1) and picture (1.78:1 widescreen) only enhance the series' epic credentials. Disc 6 contains all the extras, the meatiest of which is the marvellous 80-minute documentary "We Stand Alone Together" about the real men of Easy Company. There's also a first-rate, genuinely interesting 30-minute "making of" feature about actor boot camp, visual effects and blowing up fake trees among many other things. This is complemented by actor Ron Livingston's revealing Video Diaries of boot camp. Additionally there's a "Who's Who" section and footage of the HBO premiere at Utah Beach, plus a TV spot for car company Jeep. --Mark Walker