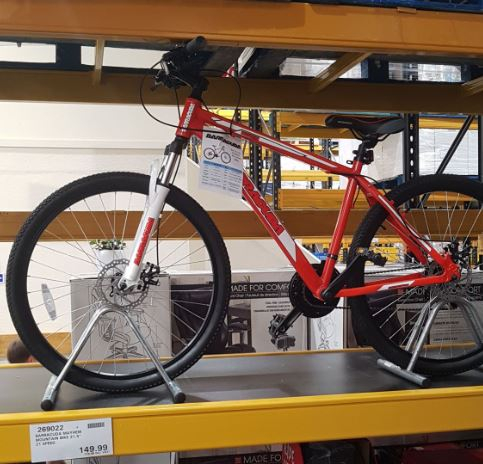 Seems like a good price in this range. Need to be a member of Costco.

21.5"
21 speed
PostTweetShare Share with WhatsApp Share with Messenger
Community Updates
Costco DealsCostco promo code
If you click through or buy, retailers may pay hotukdeals some money, but this never affects which deals get posted. Find more info in our FAQs and About Us page.
New Comment Subscribe Save for later
20 Comments
1st Sep 2019
Is this a good bike for the price? Considering for mostly path cycling and a little trail (nothing serious)

Just a good price I thought? So your logic is if it isn't cheaper than a previous price at any other time then it shouldn't be posted? Surely a good price is a good price??
1st Sep 2019

I don't think it's a required to convince you it's a good deal, I think the public tends to vote and make it a good deal, or not.

Perhaps spec is useful I guess.
I know they are shimano gearset and brakes (no idea what model). I'm sure you can find it online if you are inclined in a bike. Perhaps you can be helpful and post it up?
1st Sep 2019

But is it a good price? What is it about this bike that would make it a good one compared to what you might find for a similar price at Go Outdoors?
1st Sep 2019
I found this from the Costco website for the 18" version.

Really!!! This is why people don’t put deals on here because of gimps like you! If you don’t like it scroll on keyboard warrior!!!
1st Sep 2019

That reads as a fairly poor spec, low end zoom forks, likely freewheel drivetrain and revo shifters which aren't normal shifters for an actual mountain bike. This is mountain bike style rather than an actual mountain bike. I would say it's normal retail price was between £150 and £180 so not a bargain. If it was sub £100 that would be a bargain although a very basic bike it would be good value at that price. £180 is close to where you can get a real mountain bike with a freehub and suntour xct forks so I would consider it poor value. Also the Barracuda brand is pretty low end. I'm not sure they do any upmarket bikes with mid-level components its all entry level only as far as I can tell typically sold through catalogues at inflated prices. Not knocking the Barracuda brand but it is normally about Apollo brand level (Halfords cheapest brand). You could probably get an Apollo brand bike of similar spec for similar or less money and have support of a local shop for servicing and repairs. Again though I would pay a little more to get a entry level true mountain bike which can be got between £200-250.
2nd Sep 2019

I disagree. The point is to post things that you know are deals, not to help individuals decide if some random thing they saw is a good deal or not. Otherwise the site would be filled with even more junk posts than at present.

What’s junk to someone is gold to another. Something doesn’t have to have a shed load of money off to be a good deal. Something posted might just be the thing another was looking for, about to buy somewhere else and bingo, happy person. Even knowing it’s 10 mins closer to purchase may make it a good deal.
2nd Sep 2019
Don't buy this. İf you have 180£ go to decathlon
3rd Sep 2019
19kg..... Anybody who rides this will be put off cycling for life.
3rd Sep 2019
Avoid this bike.
4th Sep 2019

This is their equivalent price bike which is £180 and is broadly similar with the same poor drivetrain components and actually inferior brakes and lower weight limits. You'd have to spend more at Decathlon to get a better bike than this one not the same price. The ST-100 vs this Mayhem mountain bike is pretty much a bum fight of poor quality bikes with very low end components.

You are probably right in regards to drivetrain. However the frame is much better . İt also has a lifetime warranty on stem . Handlebars and frame. No brainer.
4th Sep 2019

According to the manual supplied with Decathlon bikes they have a total load limit of 100kg (bike weight, rider and accessories and lugggage) which is much less than their competitors and I believe many of the entry level Decathlon frames come from Hindustan. Considering the low weight limits and manufacturing location I would think it likely an inferior frame. Decathlon have had a lot of frame recalls for their bikes including Rockriders, more so than any other brand I believe. A Giant brand bike for example may have a total weight limit of 160kg and still offer a comprehensive lifetime guarantee on the frame and forks including carbon fibre forks which I think Decathlon only warranties for 2 years. Saying that I realise on a road bike for example a more flexible frame can give better ride comfort but that should be in the context of much lower weight limits which is probably why they can allow the frame to flex more and provide better riding dynamics.
4th Sep 2019

According to the manual supplied with Decathlon bikes they have a total …According to the manual supplied with Decathlon bikes they have a total load limit of 100kg (bike weight, rider and accessories and lugggage) which is much less than their competitors and I believe many of the entry level Decathlon frames come from Hindustan. Considering the low weight limits and manufacturing location I would think it likely an inferior frame. Decathlon have had a lot of frame recalls for their bikes including Rockriders, more so than any other brand I believe. A Giant brand bike for example may have a total weight limit of 160kg and still offer a comprehensive lifetime guarantee on the frame and forks including carbon fibre forks which I think Decathlon only warranties for 2 years. Saying that I realise on a road bike for example a more flexible frame can give better ride comfort but that should be in the context of much lower weight limits which is probably why they can allow the frame to flex more and provide better riding dynamics.

Please tell me where you got info about being built in Hindustan?
7th Sep 2019

Please tell me where you got info about being built in Hindustan?

That only applies to the lower end bikes, entry level stuff I'm certainly not saying the higher end stuff comes from there just the £180 bike we were comparing.

A quick google doesn't bring up much but did bring up this which has a comment at the bottom of the page but normally if you want to see the manufacturing location you need to see a picture of a box or a unboxing video.


Bangladesh, Sri Lanka, Pakistan, Hindustan etc these are typical low price locations for entry level bikes. Typical for steel bikes, childrens bikes, entry level bikes. I saw Hindustan on a box for a btwin bike in a video and someone mentioned their btwin bike was made in Hindustan on a forum. I think because Decathlon has a large operation in India and has many bikes produced for them by factories there which are sold there some of these bikes get exported into Europe for their very low end bikes but I'm only guessing but it would make sense based on the success of Decathlon in India.
7th Sep 2019
India is generally good quality stuff anyway they are a quickly developing country.. I don't think it really matters where a bike has been made as long as the company has strict Quality Control. I bought a bike from wiggle and it was made in Cambodia.. so again it doesn't matter..
7th Sep 2019

Cambodian bikes are generally made by Taiwanese companies there so they can export to the EU without additional duties, they are generally very good quality bikes and Cambodia is the largest exporter of bikes to the EU. They normally represent the step up quality bikes rather than entry level. For example the low end Apollo bikes at Halfords would be made in places like Bangladesh, Sri Lanka, Pakistan etc but the better quality bikes like Carrera, Voodoo and Boardman would be made in Cambodia and Indonesia and the very high end bikes may still be coming out of Taiwan or maybe mainland China.

Some of the Bangladesh bikes are slightly poorly machined for example the seat post gets the paint scratched in the seat tube as the internals of the tube are not machined smooth. The paint finish may be more prone to chipping and flaking. It's still structurally strong for most frames but the failure rate of frames is higher than a typical Cambodian factory. That failure rate may still be very low but isn't as low as the bikes produced by Taiwanese companies. As the workforce in these countries skills matures and the factories improve the wages go up and costs go up and then importers move to cheaper factories again. Taiwanese factories were rubbish at the beginning, much inferior to EU and US factories but they improved over the years but are now too expensive for low end and mid range bikes.

It gets confusing with Decathlon as until recently they used one brand across many quality levels but just like Halfords the more you pay the likely the better the factory that the bike has been imported from. However for btwin many bikes are imported as complete bikes but some are also assembled by RTE for Decathlon from imported parts in Europe either Portugal (where RTE is based) or Poland. The reason I consider Btwin frames inferior is there is some suggestion that btwin use frames designed for the Chinese market not export market, these are much cheaper frames designed for the lighter Chinese people hence why btwin have the lowest weight limits of any major bike brand. Many bikes in the Chinese market are rated to a total load of 100kg thereabouts same as btwin bikes. Try to find another bike brand that only rates its bikes to a total load of 100kg is near impossible, I don't know of any such brands sold in Europe.

Still think many btwin bikes are great value though if you can ride within their weight limits but their entry level stuff is junk in my opinion and the step up stuff isn't as good as it used to be. The Triban 100 is terrible it replaced a far higher quality bike. Seems like the sweetspot for btwin bikes is over £400 now with many bikes below that best avoided.