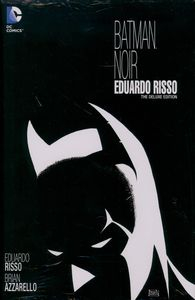 Superb price for this as this is around £25+ elsewhere and even used copies are selling for more than this.
Batman Noir: Eduardo Risso spotlights the art of 100 Bullets illustrator Eduardo Risso, which casts the Dark Knight in deep shadow on every page. Written by his frequent collaborator Brian Azzarello, this title includes tales from a variety of Batman projects, including ‘Broken City,’ a profound examination of the Dark Knight Detective and the grim metropolis that he protects. While hunting the murderer of a small boy’s parents, Batman is caught up in his own investigation and ruminations, only to fall prey to a deadly new pair of killers who have been stalking him.
*If you don't have local Forbidden Planet you can have this delivered for £3
PostTweetShare Share with WhatsApp Share with Messenger
Community Updates
Forbidden Planet.Com Deals
If you click through or buy, retailers may pay hotukdeals some money, but this never affects which deals get posted. Find more info in our FAQs and About Us page.
New Comment Subscribe Save for later
8 Comments
3rd Dec 2019
Is this the instore price too?
3rd Dec 2019

Is this the instore price too?

Yes it should be. I've regularly seen instore prices the same as online.
3rd Dec 2019
Would love to see more comics on HUKD.
3rd Dec 2019

Yes it should be. I've regularly seen instore prices the same as online.

Would love to see more comics on HUKD.

Go check the Forbidden Planet comics / graphic novels sale section. There re loads at present. I selected this as it was a stand out bargain IMO and I'm a Bat geek
Here's a link forbiddenplanet.com/cat…els
3rd Dec 2019

Is this the instore price too?

Would love to see more comics on HUKD.

Check out the works as well. Have a decent selection and usually a discount code for ordering online. I recently picked up batman noël.
3rd Dec 2019
This is well worth picking up for the Flashpoint Batman series that’s here. One of my favourites of the last decade, absolutely brilliant storyline.