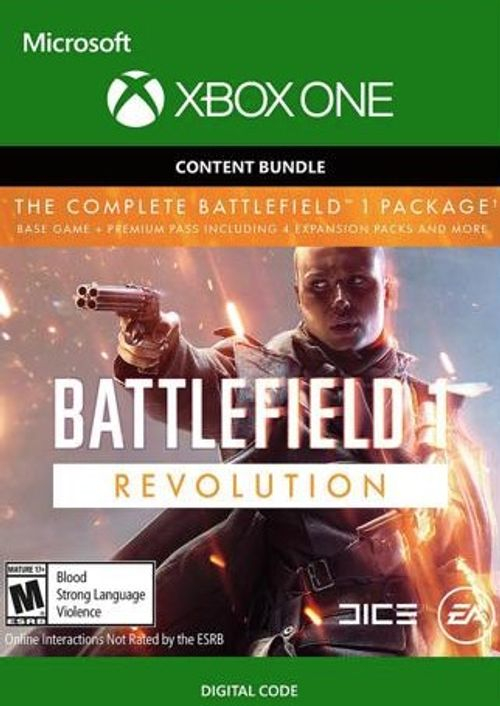 £2.99£6.7756% Free P&P FreeCDKeys Deals
12
Get deal*Get deal*
12Get deal*Get deal*
Posted 2nd May
Battlefield 1 Revolution and Battlefield 1943 includes the base game and expansion packs.
The top 3 reasons to play Battlefield 1 Revolution and Battlefield 1943
Battlefield 1 has one of the most epic single-player campaigns in the series’ history-- filled with combat in the air, land, and sea throughout various WWI battles.
The Battlefield 1: Revolution Edition brings you access to the Premium Pass! In addition to the base game you’ll get 4 large expansions, 14 Battlepacks, priority server queue position and more! See the details below for more information.
This special offer also includes Battlefield 1943-- an entire stand-alone World War II multiplayer experience is yours for free.
About Battlefield 1: Revolution Edition + Battlefield 1943
Experience The Great War like no video game has done before in this award-winning first-person shooter.
Battlefield 1’s single-player mode features stories you’ll never forget. See the war through the eyes of individual soldiers and experience war like you’ve never seen it before.
Tight, tactical, competitive multiplayer awaits you in Battlefield 1. Prepare for new maps and new conflicts.
Battlefield 1 features brand new game modes, and even the option of engaging in massive 64-player skirmishes!
Customize your soldier in Battlefield 1 by unlocking exclusive equipment, or show your skill with special vehicle and weapon skins.
Read more
What are the system requirements for Battlefield 1: Revolution Edition + Battlefield 1943?
Internet connection
Xbox Live account
CDKeys Chrome Extension
DETAILS
Release Date:
8th July 2009
Publisher:
Electronic Arts
Developer:
PostTweetShare Share with WhatsApp Share with Messenger
Community Updates
CDKeys DealsCDKeys voucher codes
New Comment SubscribeSave for later
12 Comments
2nd May
Everyone should have this game in there collection at this price.. ‌ ‌ ‌
2nd May
no brainer spent over 1000 h in bf 1 and do not like bf v at all
2nd May
Is this an expansion pack or the game could someone advise please?
2nd May

Is this an expansion pack or the game could someone advise please?

From the description it seems like it includes the full base game as well as expansion packs!
2nd May
Got excited that they’d remastered 1943 for Xbox One for a minute... alas.
2nd May
I’ve lost my disc for BF1 could I buy this and use it on my install? Keeps asking me for the disc.
2nd May

Is this an expansion pack or the game could someone advise please?

Both full games brilliant
2nd May
Is it easy to get into a game on both?
3rd May

Is it easy to get into a game on both?

Should be OK, when I've gotten digital games free with games for gold and played (lego games, I know its sad !!) it doesn't ask for disc anymore.