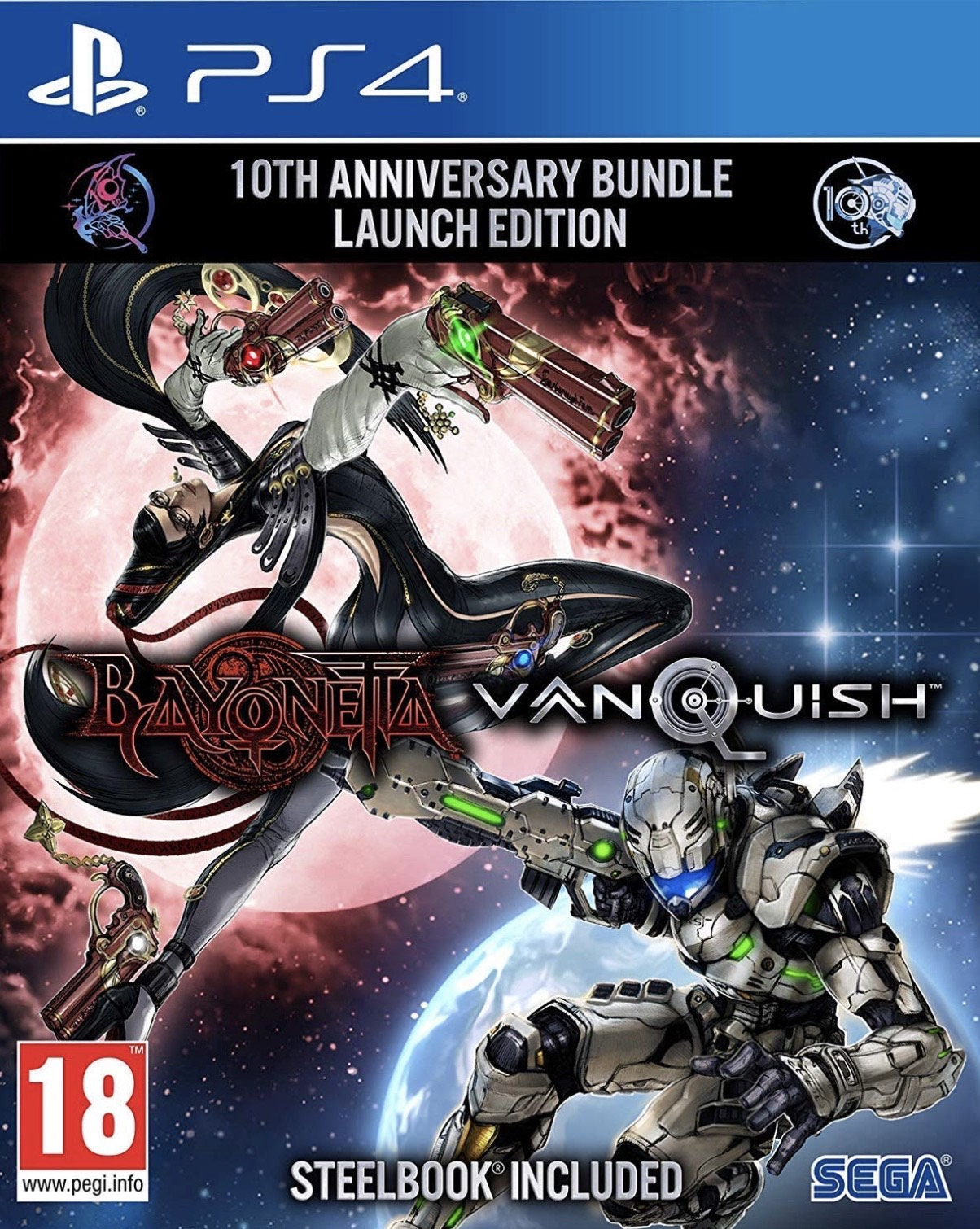 Celebrate the 10th Anniversary of two PlatinumGames cult classics with the Bayonetta & Vanquish 10th Anniversary Bundle! Bayonetta and Vanquish will be coming to PlayStation 4 and Xbox One for the first time in this remastered dual-pack. 4K graphics available at 60fps on Xbox One X/PlayStation 4 Pro.
Bayonetta
Experience the genesis of the Bayonetta series with the cult classic, original action-adventure game. The tantalizing Umbra Witch rises from the depths after half a millenium in slumber with no recollection of her mysterious past. Immediately thrust into battle, she must vanquish her countless enemies to piece together the truth.Take advantage of Bayonetta’s arsenal of skills including shapeshifting into various animal forms, summoning demons with her hair, and exercising her mastery of the bullet arts. Hack, slash, and open fire upon hordes of celestial foes in this wickedly charming action-packed adventure.

I’ll keep an eye out

Give it a couple more weeks!

Give it a couple more weeks!MM

I look forward to it, that will be a real bargain!
27th Feb

I look forward to it, that will be a real bargain!

Nope it won't, it will be about right!

Nope it won't, it will be about right!MM

I suppose that would be a subjective opinion.
27th Feb
Nope, a professional one!

A statement of fact then.
27th Feb
Will hold out for 9.99 on this one
27th Feb
2 great games but poor upgrades for this collection on the enhanced consoles. Not worth this price point.
27th Feb

A statement of fact then.

Nope not fact as nothing in certain in life!

But in I can give you a personal/professional opinion this will he sub £20 in no time.

MM
27th Feb
I have this and whilst it's nice to finally have Vanquish at a pretty much locked 60fps on console it's a disappointing upgrade overall. On base consoles it's what you expect at 1080p/60fps but the Pro consoles should have easily hit 4k. The fact that they only aimed for 1440p and left it at that is massively disappointing.

Bayonetta always aimed for 60fps so you can't see too much of a difference but Vanquish is transformed. It only ever ran at 30fps previously with regular drops but is now buttery smooth. Worth it just for that IMO but it does feel like a half baked release. Could and should have been much more.
26th Mar

I know it’s a bit of an old thread, just wondering is the game on disc or does it download once you out the disc in?
Edited by: "kentris" 26th Mar
26th Mar

I had it on PS4 and both games are on disc. There's a small patch for Vanquish but that's about it. Although if you're on Xbox, I have heard that the disc is just a download key and both games need to be downloaded in full. I can't confirm that though so don't take my word for it.
Edited by: "SFP_NooDLe" 26th Mar
27th Mar

I’m on PS4 so great that you’ve confirmed that otherwise I would’ve just picked up a 360 copy instead.