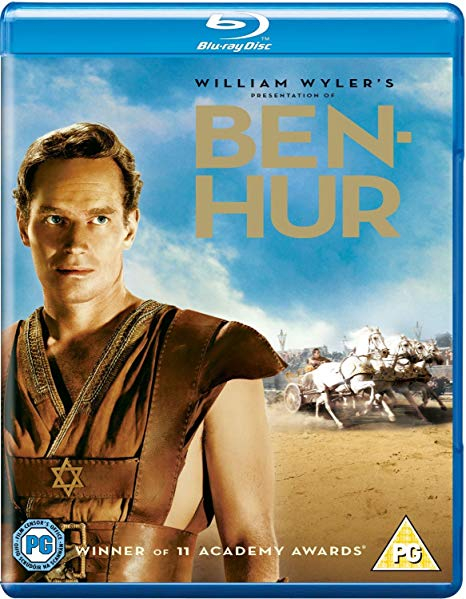 Great little price for this. Looks like Amazon made a mistake price matching the wrong version from HMV. store.hmv.com/sto…hur

Usually dispatched in 6-12 days, but for £2.49 for such a classic, it’ll be worth waiting for.
This 1959 version of Lew Wallace's best-selling novel, which had already seen screen versions in 1907 and 1926, went on to win 11 Academy Awards. Adapted by Karl Tunberg and a raft of uncredited writers including Gore Vidal and Maxwell Anderson, the film once more recounts the tale of Jewish prince Judah Ben-Hur (Charlton Heston), who lives in Judea with his family during the time that Jesus Christ was becoming known for his "radical" teachings. Ben-Hur's childhood friend Messala (Stephen Boyd) is now an ambitious Roman tribune; when Ben-Hur refuses to help Messala round up local dissidents on behalf of the emperor, Messala pounces on the first opportunity to exact revenge on his onetime friend. Tried on a trumped-up charge of attempting to kill the provincial governor (whose head was accidentally hit by a falling tile), Ben-Hur is condemned to the Roman galleys, while his mother (Martha Scott) and sister (Cathy O'Donnell) are imprisoned. But during a sea battle, Ben-Hur saves the life of commander Quintus Arrius (Jack Hawkins), who, in gratitude, adopts Ben-Hur as his son and gives him full control over his stable of racing horses. Ben-Hur never gives up trying to find his family or exact revenge on Messala. At crucial junctures in his life, he also crosses the path of Jesus, and each time he benefits from it. The highlight of the film's 212 minutes is its now-legendary chariot race, staged largely by stunt expert Yakima Canutt. Ben-Hur's Oscar haul included Best Picture, Best Director for the legendary William Wyler, Best Actor for Heston, and Best Supporting Actor for Welsh actor Hugh Griffith as an Arab sheik.

Disc Three: Special Features
Charlton Heston: A Personal Journey (78 min) [HD]
Ben-Hur: 1925 silent version, from the Thames Television restoration with stereophonic orchestral score by composer Carl Davis (143 min)
2005 Documentary:The Epic That Changed Cinema--Current filmmakers such as Ridley Scott reflect on the importance and influence of the film on modern epics (58 min)
1994 Documentary:Ben-Hur: The Making of an Epic, hosted by Christopher Plummer (58 min)
Ben-Hur: A Journey Through Pictures Audiovisual recreation of the film via stills, storyboards, sketches, music and dialogue
Screen tests (30 min)
Vintage newsreels gallery
Highlights from the 1960 Academy Awards ® ceremony
Theatrical trailer gallery
PostTweetShare Share with WhatsApp Share with Messenger
Community Updates
Amazon DealsAmazon discount code
If you click through or buy, retailers may pay hotukdeals some money, but this never affects which deals get posted. Find more info in our FAQs and About Us page.
New Comment Subscribe Save for later
7 Comments
28th Nov 2019
heat added - thx OP. awesome movie
28th Nov 2019
I wonder if they digitally removed the chronograph which could be clearly seen on one of the chariot racer's wrists?.
Edited by: "SimyJo" 28th Nov 2019
28th Nov 2019
Thanks OP....fantastic film...ordered:)
28th Nov 2019
Cheers, never seen this film before, seems to get good reviews so will give it a go.
28th Nov 2019
Not adding to basket...
28th Nov 2019

Not adding to basket...

Not adding to basket...

Looks like they have sold out now. Was working when I posted as I ordered a copy for myself.