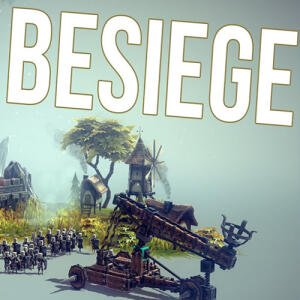 Besiege is one of the oldest physics-based games on Steam, in which you're tasked to build siege weapons and take down buildings. This was originally the theme of the game, but after five years of constant updates and mods from its community, Besiege now offers plenty of experiences, all based on its physics engine. You can play the single-player campaign which offers 42 levels, or you can jump straight into the Workshop in order to get some incredible constructions made by fans.

Besiege also has multiplayer in which you can either battle your friends or compete in order to see who can achieve levels faster. Or you can even work together in order to solve difficult levels.

The developers announced here that the price of the game will be increased after this sale:

"In line with our original Early Access plan, Besieges price will be increasing after the release of V1.0. Before the price increase however, Besiege will be on sale for 50% off, so if you haven’t picked up the game yet then the week after launch would be a great time to grab yourself a copy!"

This is the current best price on it, as well as the best price seen since September last year according to GG.Deals.
PostTweetShare Share with WhatsApp Share with Messenger
Community Updates
Steam Store DealsSteam Store voucher
New Comment Subscribe Save for later
3 Comments
18th Feb
Fully released today after being in early access for years on end. Fun little game if you are creative enough.
18th Feb
This game is fantastic, really gets the creative juices going. We like to build and fight each other over Lan. The game released with new blocks and content.
20th Feb
Humble bundle has same price if you prefer that