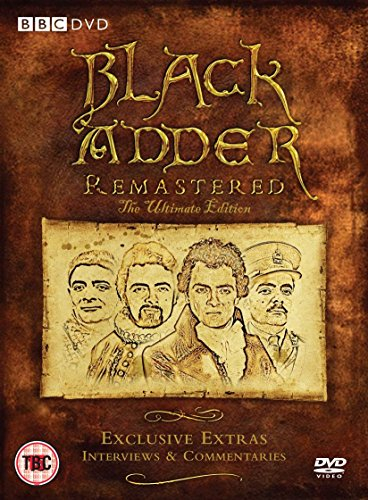 This deluxe edition includes fantastic digitally remastered episodes plus a whole host of special features, many of which are completely exclusive to DVD. This remastered Blackadder collection brings together all four eras of the classic comedy starring Rowan Atkinson. Each series of the historical sitcom traces the sniveling title character and his equally irksome descendants. Episodes feature a wide range of British stars, including Stephen Fry, Miranda Richardson, Rik Mayall, Jim Broadbent, Brian Blessed, and many others.

The Blackadder: Behold the bad hair in this first collection of silliness! Here the slimy Edmund (Rowan Atkinson), Duke of Edinburgh (alias The Black Adder), emerges from the bowels of somewhere stinky to annoy historians. The collection includes "The Foretelling," "Born to be King," "The Archbishop," "The Queen of Spain's Beard," "Witchsmeller Pursuivant," and "The Black Seal."

Blackadder II: The degradation of the grand and proud tradition that is the British monarchy continues as the loathsome Blackadder (Rowan Atkinson) snivels his way through the 16th century into the court of Queen Elizabeth I. This collection includes the six episodes comprising both "Parte the Firste," and "Parte the Seconde." Episodes are "Bells," "Head," "Potato," "Money," "Beer," and "Chains."

Blackadder III: This third series presents more dim-witted antics from the annals of the Blackadder family. Previously aristocratic, Edmund Blackadder (Rowan Atkinson) now finds himself in the midst of the Industrial Revolution as a butler and gentlemen's gentleman to the pea-brained Prince Regent (Hugh Laurie). The collection includes six episodes: "Dish and Dishonesty, " "Ink and Incapability," "Nob and Nobility, " "Sense and Senility," "Amy and Amiability," and "Duel and Duality."

From Amazon.co.ukOne of the best comedy series ever to emerge from England, Black Adder traces the deeply cynical and self-serving lineage of various Edmund Blackadders from the muck of the Middle Ages to the frontline of World War I. In his pre-Bean triumph, comic actor Rowan Atkinson played all five versions of Edmund, beginning with the villainous and cowardly Duke of Edinburgh, whose scheming mind and awful haircut seem to stand him in good stead to become the next Archbishop of Canterbury--a deadly occupation if ever there was one. Among tales of royal dethronings, Black Death, witch smellers (who root out spell makers with their noses), and ghosts, Edmund is a perennial survivor who never quite gets ahead in multiple episodes. Jump to the Elizabethan era and Atkinson picks up the saga as Lord Edmund, who is perpetually courting favor from mad Queen Bess (Miranda Richardson) and is always walking a tightrope from which he can either gain the world or lose his head. Subjected to bizarre services for her majesty (at one point, Edmund is asked to do for potatoes what Sir Walter Raleigh did for tobacco), Edmund--as with his ancestor--can never quite fulfill his larger ambitions. The next incarnation we encounter is in late-18th-century Regency England. This time, Blackadder is a mere butler to the idiotic Prince Regent (Hugh Laurie in a brilliantly buffoonish performance) and is caught in various misadventures with Samuel Johnson, Shakespearean actors, the Scarlet Pimpernel, and William Pitt the younger. With a brief stop in Victorian London for a Christmas special, the series concludes with several episodes set during the Great War. The new Edmund is a career Army officer, but a scoundrel all the same. Shirking his duties whenever possible and taking advantage of any opportunity for undeserved reward, this final, deeply sour, and very funny Blackadder negotiates survival among a cadre of fools and dimwits. No small mention can be made of Atkinson's supporting cast, easily among the finest comic performers of their generation: besides Laurie and Richardson, Stephen Fry, Tony Robinson, and Tim McInnerny. --Tom Keogh, Amazon.com
PostTweetShare Share with WhatsApp Share with Messenger
Community Updates
9 Comments
Post a comment