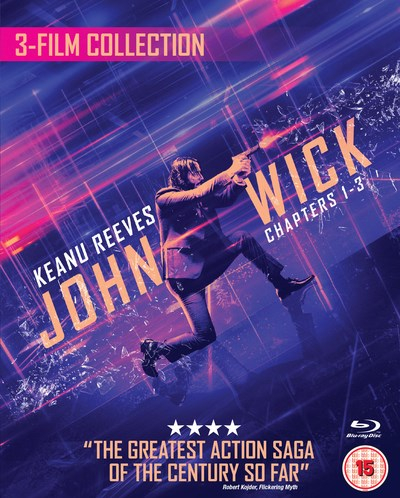 In time for the release of the 3rd movie on BluRay - the 16th - is this good price offer from Zoom. Use the code SIGNUP to get it delivered for £19.79

Description
Triple bill of action thrillers starring Keanu Reeves as a former hitman who must return to the criminal world he left behind in order to seek revenge.

In 'John Wick' (2014), after the eponymous hitman (Reeves) refuses to sell his car to Russian gang leader Iosef (Alfie Allen), the gang members break into his home and kill his dog, a gift left to him by his late wife Helen (Bridget Moynahan). It turns out that Iosef is the son of Wick's ex-boss Viggo Tarasov (Michael Nyqvist), head of the Russian mafia in New York. As John attempts to track down and kill Iosef he encounters assassin Ms. Perkins (Adrianne Palicki), who is working for Viggo, and eventually faces his former boss in an ultimate showdown.

In 'John Wick - Chapter 2' (2017) Wick is again coaxed out of retirement when Italian crime boss Santino D'Antonio (Riccardo Scamarcio) calls in a debt and persuades the former hitman to kill his sister, Gianna (Claudia Gerini), in Rome. However, the tables are soon turned when Santino puts out a hit on Wick, a bounty his fellow assassins all over the world are only too happy to collect. The cast also includes Ian McShane, John Leguizamo, Willem Dafoe and Laurence Fishburne.

In ‘John Wick: Chapter 3 – Parabellum’, super-assassin John Wick returns with a $14 million price tag on his head and an army of bounty-hunting killers on his trail. After killing a member of the shadowy international assassin's guild, the High Table, John Wick is excommunicado, but the world's most ruthless hit men and women await his every turn.

Hope it helps someone.
PostTweetShare Share with WhatsApp Share with Messenger
Community Updates
Zoom DealsZoom voucher codes
If you click through or buy, retailers may pay hotukdeals some money, but this never affects which deals get posted. Find more info in our FAQs and About Us page.
New Comment Subscribe Save for later
Top comments
8th Sep 2019

I watched 3 last night. Clearly a set up for further films. A bit repetitive as well.
Shoot someone in the head, duck, grab someone who's attacking you, shoot someone else in the head then shoot person number two in the head...
Rinse and repeat.
19 Comments
7th Sep 2019
10% for new accounts only. They've fixed the PayPal method!
7th Sep 2019
Keanu 🤤
7th Sep 2019
Quantum baby.
7th Sep 2019
Any extras on this set worth getting it for? Or just watch them on film4 / purchase them singularly cheaper over time
7th Sep 2019
Is number 3 Atmos on Blu-ray disc or only 4k Disc like number 2
Edited by: "AJ92" 7th Sep 2019
7th Sep 2019
Just watched 3. Thought this was meant to be a trilogy, but it's clearly going to continue forever.
8th Sep 2019
Modern dance to a percussive beat.
About as abstract as dance can be.
8th Sep 2019

I watched 3 last night. Clearly a set up for further films. A bit repetitive as well.
Shoot someone in the head, duck, grab someone who's attacking you, shoot someone else in the head then shoot person number two in the head...
Rinse and repeat.
8th Sep 2019
Part 4 is due to be released in May 2021, I believe.
8th Sep 2019
Two things that make me cringe in films: nail pulling and eye stabbing.

Great films nonetheless
8th Sep 2019
Breathtaking
8th Sep 2019
Bought 1&2 recently (cheaply!) and they came with a Digital code that was supposed to be Out of Date. I chanced it anyway and was delighted to find it worked!
8th Sep 2019

That only happens a couple of hundred times in the film though...
8th Sep 2019

That only happens a couple of hundred times in the film though...

That's what you get when Keanu insists on performing 75% of the choreo...