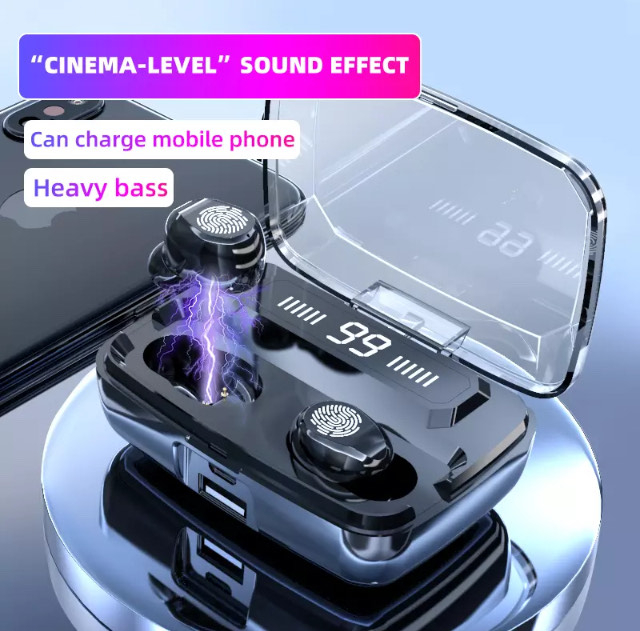 Some people seemed to enjoy reading through my little review of the Xiaomi Dreame V9 cordless vacuum cleaner the other day, so I thought I’d post another little deal on something I purchased the other day, and my reasons for purchasing

I was sooo tempted to start this deal off with, “This won’t impress the Sony/Apple earpod fanboys…..” to bait a few people into discussion, but I’ll hold fire this time!

OK, so this is a pair of wireless Bluetooth earbuds and I bought them to pair to my phone as I’ve recently started jogging again, and like listening to a few tunes as I’m running.

I didn’t fancy the price of a pair of Apple ear-pods. If I used ear pods day in, day out, then I might look to invest in a bit more money, but for me, I just wanted something for running, that’s it, so didn’t fancy paying a premium.

I initially opted for a pair of Cambridge Audio Melomania 1 ear pods, as they have been reduced on amazon from £150 down to £99 – That was still a bit more than what I wanted to pay, but considering the reviews were very good, Cambridge Audio is a very well established audio brand, and received a What HIfI 5 star review, I decided to order a pair.

First and foremost, the audio quality is very good….I was impressed!

But I had a problem….and it was the number one reason for sending these back….

The audio controls on the earpods were of the mechanical, physical “click” type, where you physically push onto the pod to get it to change volume, play/pause, skip tracks, etc. The more I was using them, the more I was physically pushing the pods deeper into my ear canal!

What starts off as a reasonably comfortable pair of pods when you first put them in, eventually (for me at least) became a very uncomfortable experience. So much so, that after a couple of clicks, when the pods were wedged deep into my skull, I found myself physically removing them from my ear to press the button, and then put them back in my ear. Eventually I found a way of gripping the pod with my thumb and second finger, then clicking the button with my index finger, but this wasn’t easy and would prove even more difficult mid-jog.

So yeah, very good earpods, but alas not for me.

This is when I went back to doing my research!

I decided £100 was too much to spend anyway, so looked for cheaper options. I wanted a pair that offered reasonably good audio, but crucially for me, offered an alternative method for controlling the music without physically pressing down onto the pod into my ear canal!

That’s when I discovered these true wireless buds.

On paper they seemed to tick all the boxes. They didn’t have a physical “click” button on them, but instead offered a touch-sensitive button, where the slightest touch controls them.

As a bonus, the charging case also doubles-up as a power bank. It’s definitely not as good as a dedicated power bank, and you’ll be lucky if you even get one full charge out of it, but it’s handy if your phone is running low, and you want to boost it up a bit.

Got the pods, and personally I found them to be even more comfortable than the Cambridge audio pair! In terms of sound quality, I’m sure an audiophile will tell you it’s not on a par with the Cambridge Audio/Sony/Apple equivalents, but for the average pair of ears like mine, I’m honestly struggling to tell the difference. The sound is good, they are very comfortable, and won’t get wedged down my ear so far that I’ll need a doctor’s visit!

They are also Bluetooth 5.0, IPX7 Waterproof, and have a decent wireless range.

If you don’t already know, BT 5.0 is best when selecting wireless ear pods, as they have a better range, faster data rates, better IOT compatibility, and lower power consumption than the older BT 4.2 standards. They are also fully backwards-compatible.

IPX7……. The “IP” stands for Ingress Protection, and here is a breakdown of the various ratings:

IPX0: The product offers no special protection from water.
IPX1: Can resist water that drips vertically onto the product.
IPX2: Can resist water that hits the product at a 15° angle or less.
IPX3: Can take water sprays of up to 60°.
IPX4: Is resistant to water splashes from any direction.
IPX5: Can resist a sustained, low-pressure water jet spray.
IPX6: Can resist high-pressure, heavy sprays of water.
IPX7: Can be submerged up to 1 meter in water for 30 minutes.
IPX8: Can be submerged deeper than 1 meter. The exact depth beyond 1 meter is usually specified by the manufacturer.
IPX9K: Resists extremely high-pressure, high-temperature sprays at close range.

So as you can see, these pods should be more than capable if you plan of going for a run with them in your ears and it’s raining.

All in all, I’m very impressed with them, and happy to recommend!

Just to note, the pair I purchased in Amazon look pretty much identical to these other than were IPX8, however I paid £27.99 for them, and even thought that was a decent price!

This is not relevant to the actual deal, but here’s a few songs I’ve been running along to for motivation….would be interested in some other suggestions for my jogging playlist!

What a pile of , should of not wasted my time and money! Absolute garbage, very tinny rubbish sound
Deal editor
5th Feb
For more about how delivery, tax & customs and returns work when shopping from Aliexpress, see our guide here!
AliExpress DealsAliExpress promo code
New Comment Subscribe Save for later
47 Comments
2nd Feb
Seems a cheap way to see if you can live with ear buds. Thank you
2nd Feb
Wont ship to selected region and bumps price up to £13.92
2nd Feb

Same for me
2nd Feb
This is the problem with HUKD sometimes.... I posted a different seller that did but HUKD said it didn’t meet seller criteria, so had to use the link above.... will post another link in the comments
2nd Feb

Here’s the link to the one with UK shipping...

The exact model I got were the M11 dual ear LED... this seller is selling them with free UK Shipping for £11.62
Edited by: "Cyberry" 2nd Feb
2nd Feb
Shipping might be delayed if coming out of China right now
2nd Feb

That’s strange? The link is working fine for me? Is it showing that it’s from the seller “Keep Pro Store”? 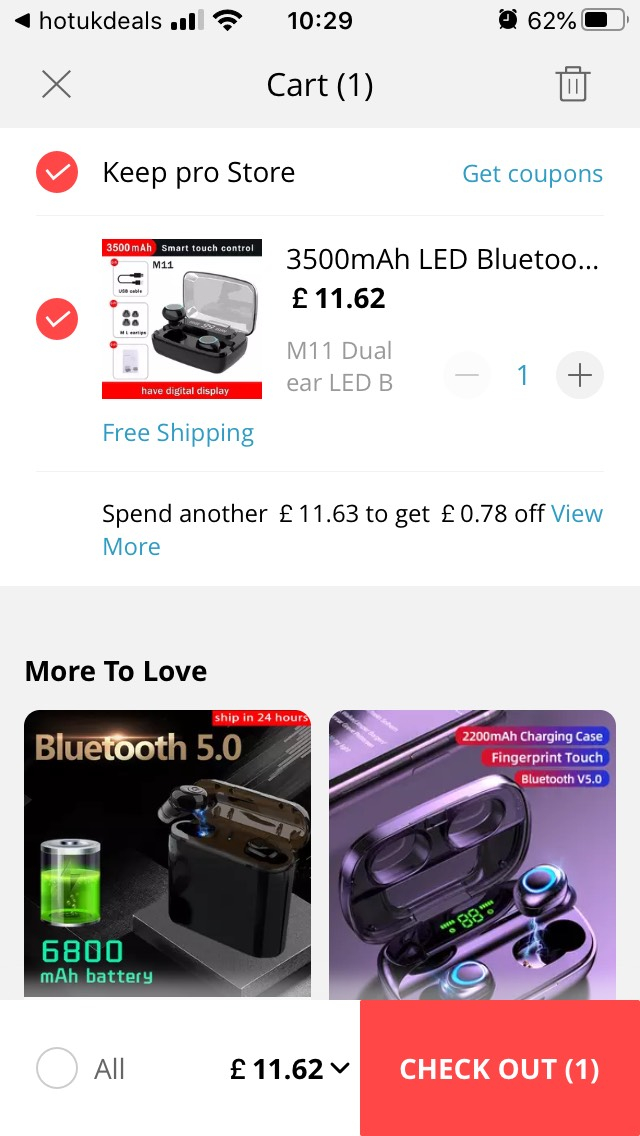 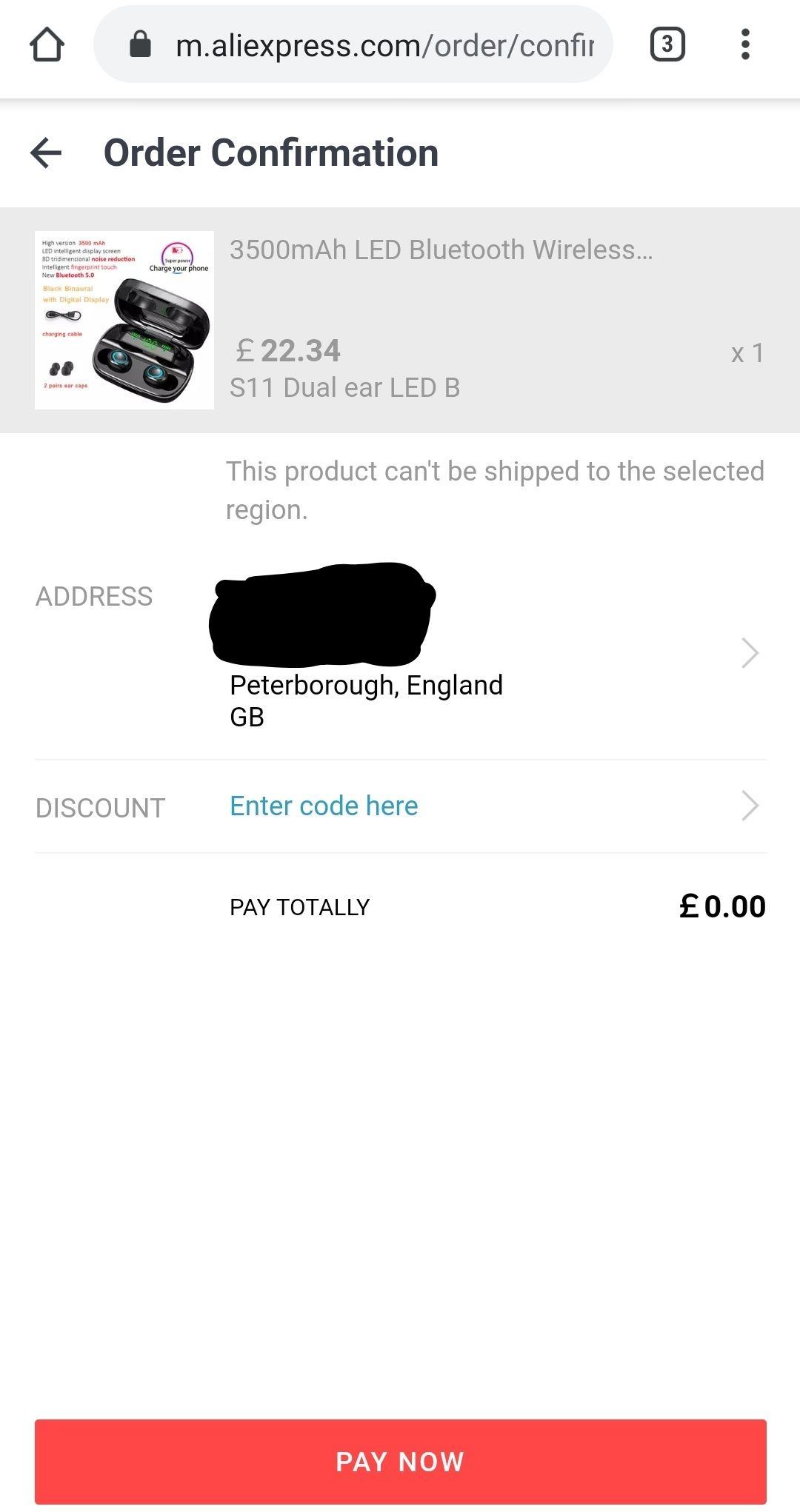 And this is my basket.
2nd Feb

[Image] And this is my basket.

[Image] And this is my basket.

Could you please post the complete URL at the top of that page? I’m curious because when I am clicking to checkout I don’t get any issues?
2nd Feb
Cold, not AirPods ‌
2nd Feb

Shipping might be delayed if coming out of China right now

It might be because I am in Peterborough? URL was taken straight from you comment above. Anyway deal is a deal. At this price you can't complain.
2nd Feb
works for me, I live around 10 miles from Peterborough, ordered a set .
2nd Feb

Couple of things worth checking...

1. Do you have a VPN running on your phone? Just wondering if that’s causing some kind of issue in terms of where it thinks you are based?

Also, does it make any difference if you register with AliExpress first, and then click on the link to the item?
2nd Feb
Doesnt really make sense that they would send from China to Peterborough but not China to Nottinghamshire. Same cost and process.
2nd Feb
Wow what a description 😳
2nd Feb

Shipping might be delayed if coming out of China right now

They'll be fine, just leave 'em in a bucket of Dettol for a couple of weeks!
2nd Feb
Do they auto connect when taken out of the Charging case
2nd Feb

Do they auto connect when taken out of the Charging case

Yep, what I did when I first got mine was pair them in my Bluetooth menu, but then after that, as soon as you take them out the box they auto-pair
2nd Feb

Thanks and can you please confirm if i am ordering the correct ones ? Confused with the second link in comments. 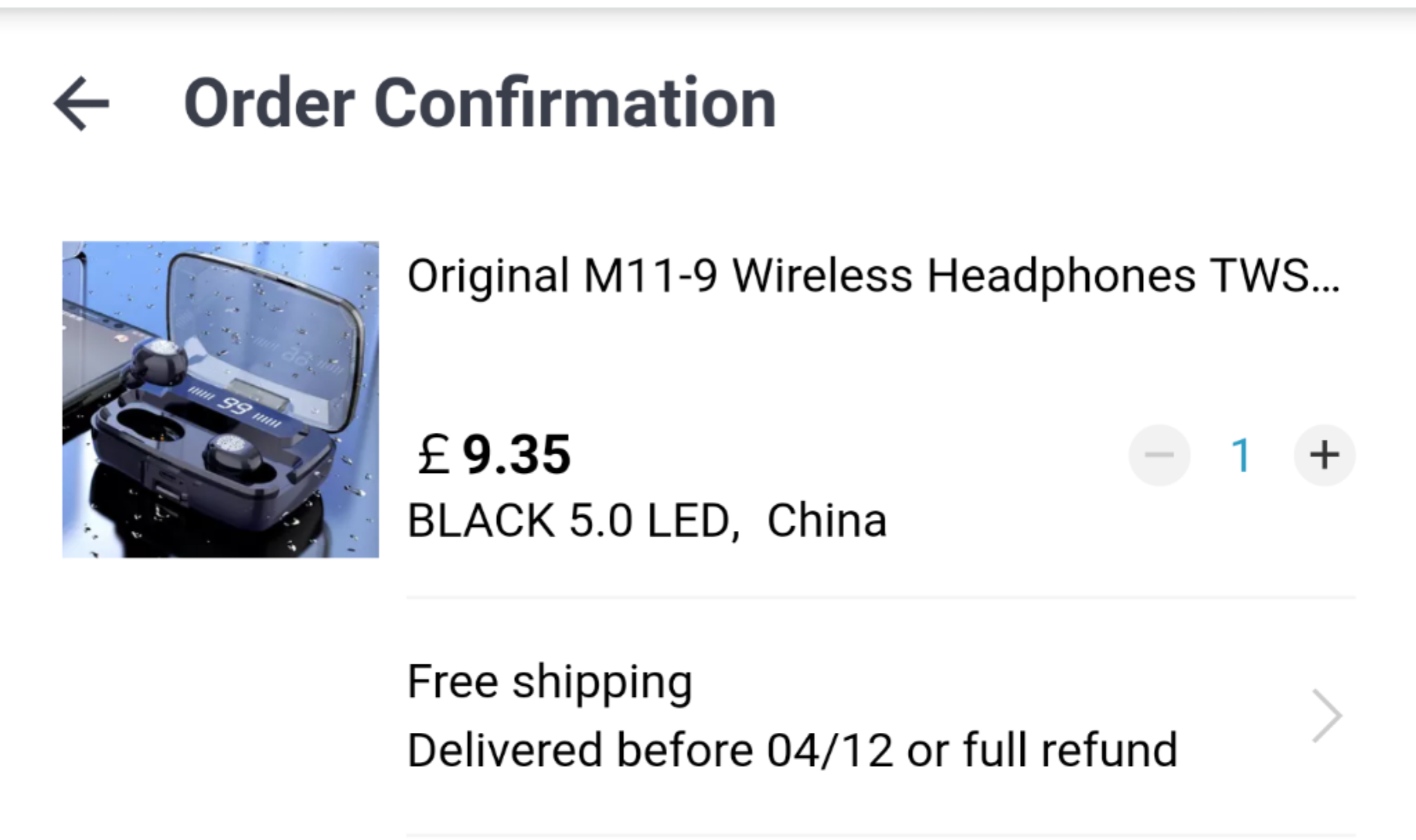 2nd Feb
Last time I researched these, there were similar earbuds with powerbank stand on ebay delivered from uk for £10ish.
2nd Feb

Sorry I posted another link as some people clicking on the link were saying that they couldn’t get shipping to the UK.

The cheapest I’ve seen them on eBay from a (supposedly) UK shipper is £15.31 for the M11 pair, which is the pair I have

rover.ebay.com/rov…785
Edited by: "Cyberry" 2nd Feb
2nd Feb
I've just ordered from the Op's posting.
I will post photo below.

Heat given
2nd Feb
Good luck getting anything out of China any time soon. Last update was the 9th before everywhere opens and last night the first reports of it being pushed back to the 18th were given to factories & shipping hubs. Just awaiting confirmation from a few of my team over there at the moment whether the 18th is for the entire country or just the likes of Shenzen etc.
2nd Feb
Heat, just for your description @Cyberry‌
2nd Feb

Never mind, looks like something was wrong on my mobile. Done it on PC and worked fine. I know for fact that VPN is off and it didn't make any sense to me.
2nd Feb
No PayPal payment method, be wary. Have had many a problem with receiving items or even claiming refunds from aliexpress
2nd Feb
thanks OP, worked for me - 10.72 in the end (including fee for paying by paypal). Not used AliExpress before so got a new customer discount...
2nd Feb

Same here. Been thinking about getting some cheap earbuds for work and these fit the bill.
2nd Feb
I have this. it's just ok.

It's comfortable, easy to use, connects instantly.
Sound quality is not good.
2nd Feb

Maybe it’s just my ears, but I had the Cambridge Audio Melomania 1 ear pods (which get constant 5-star reviews for audio quality) and there wasn’t much difference in it for me.... certainly not worth 10 times the cost, that’s for sure!
2nd Feb
Any feedback on the audio lag (or lack thereof) when watching video?
2nd Feb

Any feedback on the audio lag (or lack thereof) when watching video?

I’ve only watched a YouTube video on my phone, but that was perfect. Zero lag
3rd Feb