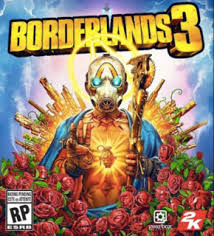 Borderlands 3 is having a free to to play weekend on both Xbox One and PS4 until the 24th November.

The original shooter-looter returns, packing bazillions of guns and a mayhem-fuelled adventure! Blast through new worlds and enemies as one of four new Vault Hunters. Play solo or with friends to take on insane enemies, score loads of loot and save your home from the most ruthless cult leaders in the galaxy.

Source
PostTweetShare Share with WhatsApp Share with Messenger
Community Updates
Xbox.com Store DealsXbox.com Store voucher codes
If you click through or buy, retailers may pay hotukdeals some money, but this never affects which deals get posted. Find more info in our FAQs and About Us page.
New Comment Subscribe Save for later
Top comments
20th Nov 2019
Oooh. If I start the download now, I might get a couple of hours in before it expires (assuming available before hand)
20th Nov 2019

Oh I have a kenwood chef but thats cheating

‌ No-one will ever know!

Oh I have a kenwood chef but thats cheating

‌ No-one will ever know!

Sold, thanks
20th Nov 2019
Oooh. If I start the download now, I might get a couple of hours in before it expires (assuming available before hand)
20th Nov 2019
Nice . Can let my son try it before he chooses his free pc game
20th Nov 2019
Any ideas how big the PS4 version is?
20th Nov 2019
Hmm maybe..if I got time. my weekends are precious (Gollum voice)
20th Nov 2019
Probably not free on pc because epic store would be unable to do free weekend trials.
20th Nov 2019
I wonder why not for PC. Shame.

And yet still no pre-order for the PC version

What? It's been out on pc for ages now
20th Nov 2019
Awesome, I've actually amazed myself with my self restraint for this game. I've been looking forward to it for literally years, I absolutely love the Borderlands series. But I get very little time to play games these days and have such a backlog, so I thought rather than buying it on launch I'll wait until I can pick it up cheaper.

Now I'll finally get to play it, and I think usually with these free to play weekends they often also put the game on sale. I was hoping for a Black Friday price drop anyway
20th Nov 2019
It's on sale for £35.99. But only for the next 2 days.
20th Nov 2019
hopefully get to change country to Australia or New Zealand in Xbox settings to get free to play sooner than elsewhere
20th Nov 2019
Does your progress carry on over if you do decide to purchase it at a later date?
20th Nov 2019
If I start the download now, it maybe done in time for me to play an hour or two. That's slow internet for ya, Hoping we do get that free broadband would hopefully improve a lot as other countries that have State run broadband have it so much better
20th Nov 2019
Can someone let me know when it's available to download. Thanks guys
20th Nov 2019
Is this game any good, metacritic has a poor user score? I know it’s free this weekend to try but you can buy it for £36 on the Microsoft store, but only in the next two days??? Feedback would be appreciated, thanks
Edited by: "michaeldvi" 20th Nov 2019
20th Nov 2019
how much is it
20th Nov 2019

Can someone let me know when it's available to download. Thanks guys

None of the websites reporting this deal state a time unfortunately. I would imagine it will go live at either midnight or 18:00
20th Nov 2019

Just looking and it isn't available yet, unfortunately.

you may have to change location to NZ on xbox too
Edited by: "sliv123" 20th Nov 2019
20th Nov 2019
Noone cares until it's on Steam.
20th Nov 2019
I’ve been holding out for a BF deal on this one, at least this will give me a feel for it before purchasing. Thanks OP!
21st Nov 2019
Tempted to play but I'd only get a few hours on it and then would have to wait a year or so for a complete edition as rather play the game when its all done as no doubt lots of DLC will be available for this.
21st Nov 2019
It's not a bad game by any means, but I honestly found it to be way too similar to Borderlands 2. I got bored after a couple hours. I've heard the later worlds are better, but my mind is too numb to continue right now.
21st Nov 2019
Is this free yet in the UK? I can't see any link
21st Nov 2019
Can't download it yet, would be good to actually download it in the morning ready for later! So looks like I'll end up forgetting about it
21st Nov 2019
Does anybody know if you will be able to play local multiplayer for free during this period? Presumably it is just online but thought I would ask
21st Nov 2019
The game is good, but the accessing any menu makes the game lag so badly it hinders the experience. A patch is due today however that is supposed to address these issues.
21st Nov 2019

The Free to Play Weekends unlock the full game with all features so you'll be able to play local multiplayer.
21st Nov 2019
PSN link?
21st Nov 2019
It's still showing as full price on ps store and it's yesterday's tomorrow today
21st Nov 2019
Cheers, may give this a go. Working the weekend though but even if I can get an hour in I should know if it’s worth buying.