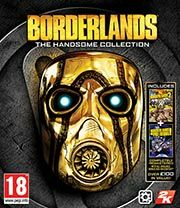 Borderlands: The Handsome Collection is the essential Borderlands compilation and includes the definitive versions of both Borderlands 2 and Borderlands: The Pre-Sequel, built specifically for next-gen consoles. PlayStation 4 and Xbox One customers will experience the absolute highest performance and highest fidelity graphics for any Borderlands game ever played on a video game console. For the first time in the franchise’s history, play four-player split screen on a single television, all in stunning high definition. Experience the entire Handsome Jack saga (including all available bonus add-on content*), from his not-so-humble beginnings to the heights of his egomaniacal tyranny. Continue the adventure by transferring your previous saves to the next generation of consoles with the new cross-save functionality.**

-Two critically acclaimed Borderlands games in one package – experience Handsome Jack’s rise to power in Borderlands: The Pre-Sequel and his reign as maniacal Hyperion CEO in Borderlands 2.
-Over $100 in value and hundreds of hours of gameplay: includes all campaign add-ons, playable character packs, level cap upgrades, and assorted combat arenas previously released as downloadable content for both titles, plus dozens of additional character customizations.
-Borderlands: The Handsome Collection supports four different players on a SINGLE split screen – next generation power fully utilized!
-Pick up right where you left off! Transfer your Xbox 360, PlayStation 3, or PS Vita save files onto next-gen with cross-save*.
-Explore the mayhem filled world of Pandora and its moon in amazing high definition with smooth high performance frame rates never before seen in Borderlands on consoles.
-With over 55 editorial awards, enjoy the most critically acclaimed franchise to ever include butt-slamming and a diamond pony.

*Includes all available downloadable content for Borderlands 2 and Borderlands: The Pre-Sequel as of March 24, 2015. Internet connection as well as a PlayStation®Network account or an account on the Xbox Live online entertainment network from Microsoft is required to download certain add-on content.
**Save transfers must be between same console family.
PostTweetShare Share with WhatsApp Share with Messenger
Community Updates
2K Games Deals
If you click through or buy, retailers may pay hotukdeals some money, but this never affects which deals get posted. Find more info in our FAQs and About Us page.
New Comment Subscribe Save for later
3 Comments
18th Dec 2019
Great price for a lot of gaming here and especially if you play couch co op.
18th Dec 2019
Could never seem to get into Borderlands 2, but enjoyed the 1st and the 3rd.
18th Dec 2019
Plus standard postage @ £1.99

Voted hot regardless, lot of game for the money!