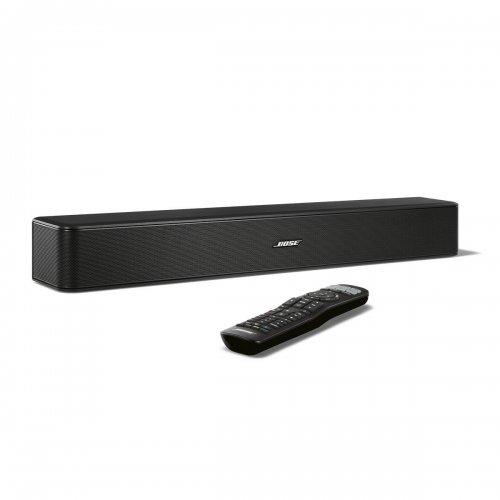 2 year warranty as standard with Bose anyway.
PostTweetShare Share with WhatsApp Share with Messenger
Community Updates
Amazon DealsAmazon discount code
If you click through or buy, retailers may pay hotukdeals some money, but this never affects which deals get posted. Find more info in our FAQs and About Us page.
New Comment Subscribe Save for later
24 Comments
3rd Jan 2017
Free delivery at JL
3rd Jan 2017
Great price, paid £199 for mine.

Its not the loudest thing on the planet nor does it have a great amount of base, but the sound quality is fantastic. well worth the price
3rd Jan 2017
Voted warm for price and build quality being Bose !
BUT...not many great reviews online:- WhatHiFi review
3rd Jan 2017

I've been through all this and in my opinion, people are expecting to get 5.1 quality bass and sound from a small speaker to fill a large lounge, which isn't going to happen.

If you're trying to fill a small room such as a small to medium bedroom then I can't see it being too much bother. I'm buying one mainly because I don't really have the space for a subwoofer and soundbar so the Bose seems a nice compromise.
Edited by: "M0nk3h" 3rd Jan 2017
3rd Jan 2017
I wish people would stop buying from Amazon when they price match. What happens when Amazon have driven more companies out of business and there are fewer to force them to lower their prices?

Amazon would still be charging £200 for this if they could get away with it. Give JL your business for reducing the price first.
3rd Jan 2017

For the same price with next-day delivery included with my Prime subscription, I'd much rather go with Amazon and use my subscription than go with a competitor who will offer me a slower delivery option for free.
3rd Jan 2017

I do understand that, I'm a Prime member too, but personally I'm happy to wait an extra day or so to give my money to the business that deserves it more.

We'll all end up paying more in the end if we stop buying from the businesses who force Amazon into lowering their prices.
3rd Jan 2017
I tend to buy from the original shop that reduces the price, not the followers
3rd Jan 2017

True yes. It depends which way you look at it, I'm a cheap barstool so I'd much rather just use my subscription and get it where it seems cheapest, that and I love Amazon customer service.

Same with Vinyls, I'm all for independant shops but their prices compared to the likes of Amazon and other shops, are shocking.

It may seem harsh but it's only the same with any store you shop at. ASDA, Tesco the likes will all do tactics like this, just not as prominent as something like this.

Surely if you wanted people to shop at your store, you'd reduce your prices to get business?

Reality is that for many years the big companies have been doing this, look at the supermarkets they closed down nearly all of the butchers and green grocers, in the early 90s one of them even opened a blacksmiths in a rural location. They tried with the electrical stores and we only now have one main one left plus JL and they have to be big enough to complete, though like any of these price matched deals and same with in store discounts it's not th acual company that gives the discount it's the supplier. Suppliers are who we really need to be worried about.
3rd Jan 2017

I do understand that, I'm a Prime member too

So it's ok to put the small businesses out of business as long as its on your terms?
3rd Jan 2017
Think this is the same as the deal that I was looking at yesterday on the John Lewis post - have just ordered one as we want it for speech on TV programmes rather than bass and booms. More comments on this post: hotukdeals.com/dea…e=1

Do you also get a 2 year warranty on Amazon?
Also, anyone know if you get the required cable in the box? Seems to indicate it isn't included.
Edited by: "panddda" 3rd Jan 2017
3rd Jan 2017
This or the Yamaha YAS105BLB ?

hotukdeals.com/dea…300
Edited by: "roirulz" 3rd Jan 2017
4th Jan 2017
having bought a soundbase recently I would caution people about the connections on soundboard etc. I bought a Panasonic SC-HTE80 Speakerboard Bluetooth Sound Base, Black. Once connected by HDMI that is ARC compatible (Google it) then the TV remote controls the soundbar volume. The Yamaha deal elsewhere on here learns the TV remote to allow easier control. it means avoiding multiple remotes for basic operation.
4th Jan 2017

Bose give you a 2 year warranty as standard so this isn't a worry. AFAIK Bose include the optical cable in the box.

Refer to their manual:

This essentially has many of the features of ARC but in two different forms 1) Detects an Audio signal then wakes up accordingly and 2) You get a universal remote included in the box enabling to you have a single remote for both.

It's no ARC but it's just a different implementation of it.

I've always seen the HDMI(ARC) ports on my recent TVs but never knew exactly what it was. A friend told me about it and didn't think much of it apart from it was pretty neat but didn't click that I had a compatible TV. I have 2x LG 47LB650v TVs and the downstairs model has the Optical port broken due to it bending from the wall mount it's on. I remembered the ARC input and now we have our 5.1 working again.

I personally think Optical, although brilliant, is now considered obsolete due to the likes of HDMI (ARC).

Thanks! Weighed up pros and cons of Amazon v John Lewis and decided to go for JL in the end as they're probably better in the event of any returns being needed or claims under warranty. Also used Paypal so don't need to pay for it until after Payday, which is handy following Christmas!!
4th Jan 2017
This should be expired or the price changed to £169.00
5th Jan 2017
This may be better value

Have you got this one? I've been looking at some of the Cambridge ones, and that one came up.

Wondering mainly what it's like for music. I want to scale down my hifi setup and get rid of amp + stereo speakers for the sake of redecorating. I know a soundbar will never match it, but it's hard to find reviews that go into any depth about the music playback quality.
11th Jan 2017

Yes I have and would recommend it. You can try it out at one of the Richer sounds stores