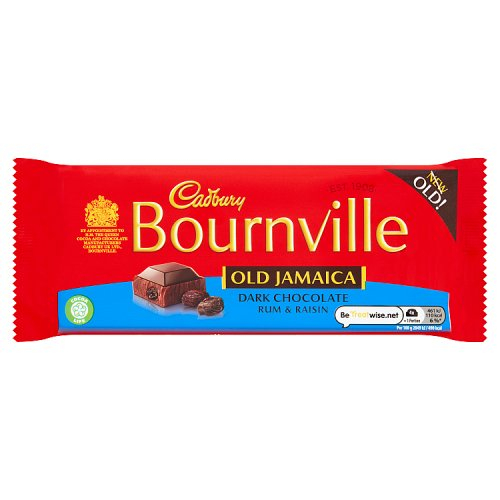 £0.99£1.4532%Home Bargains Deals
12
Get deal*Get deal*
12Get deal*Get deal*
Posted 18th MayAvailable: Yorkshire & Lincolnshire (West Yorkshire)
Important. This deal is not a guarantee there will be any stock in the store, so please don’t make a trip you wouldn’t have made otherwise just for this item, especially as it is a ‘luxury grocery’ rather than something essential - we should all limit our time out of our houses to help slow the spread. Please shop responsibly.

I remember this from years ago. Loved it then. The last time this was on HUKD seems to have been 2012 at the very end of its last limited run. No wonder I'm hungry! Loads in store in Keighley and in Bradford but not, so far, online. Best before Dec 2020 if it lasts that long. Now says it is Vegan but according to The Sun, Cadburys have said the recipe used for the new bar is the exact same as the original so perhaps it has always been vegan but these days vegan is a major selling point so they are being louder about it. Home Bargains show the normal price as £1.45 but the Cadburys launch says it should be £1. I haven't seen it in my local Asda/Morrisons/Sainsburys.

Some blurb:
"It was last seen in a limited run in 2010 and before that in the mid 1990s as part of a 'World of Chocolate' selection. Prior to that it appeared in 1987 in the Cadbury's Dairy Milk Classics range. But the nostalgic bar, first launched over 50 years ago, was only ever meant to be a limited edition."
PostTweetShare Share with WhatsApp Share with Messenger
Community Updates
Home Bargains Deals
New Comment Subscribe Save for later
12 Comments
18th May
Nice, I thought this had gone for good.
Edited by: "DCFC79" 18th May
18th May

Nice, I thought this had gone for good.

Yup, me too. I would expect it to be national despite the Yorkshire & Lincolnshire tag that has been added.
18th May
Sounds good, nice price. I used to respect Cadbury's when it was a principled company.
18th May
Got Some of this last week from the one in Liverpool near the Head office. Brings back some memories...
18th May

Cadbury is ok, it is mostly Mondelez that is the problem.
18th May
Love this
18th May
l love this stuff, its great. It used to be in a pale blue wrapper. l notice its got a lot more of the bournville red in it again now.
18th May

Yes the wrapper was a different colour, I wonder what it tastes like.
Ill get some when I'm passing a HB store but wont make a special journey.

I recall a campaign was started to bring it back.
Edited by: "DCFC79" 18th May
18th May
From memory the wrapper used to be a yellow/gold colour with a scroll or pirate ship on it. We are talking 40 years ago. It was pure heaven eating this chocolate bar. I will surely be buying a bar or 3 to indulge in some memories.
18th May
Just bought it in my local Pakistani convenience store, marked at £1. I've been buying the Chocolatier copy of this which is a 200gm bar. But I loved the original bar so looking forward to comparing them.
18th May
Love this chocolate bar, bought one yesterday, reminds me of my grandfather it was his favourite chocolate
19th May
It's been in home bargains for a while. My Mum & Dad are shielding, so I have to take them a regular supply of plain chocolate. I try to get as many different flavours as possible and this is one of my Dad's favourites.