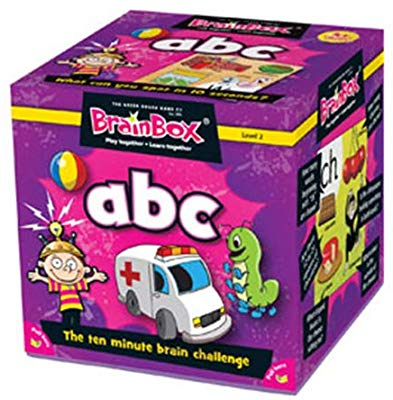 BrainBox is a fast and fun memory game that does not require any pens, pencils, paper, playing board or even a table! Each round takes 10 seconds so all players are involved. A game lasts as long as you want it to, 10 minutes is the norm, but playing for 5 minutes is great fun also. BrainBox is educational and is perfect for families and groups of friends to play, wherever they are, on a level-playing field. Packed in a sturdy cool magnetic cube box. BrainBox is ready to play without any set-up time needed. The rules are pretty straight forward. You can play solo or with as many people as you want. A player simply picks a card and studies it for 10 seconds before being asked a question from the back, chosen by the roll of a die. A correct answer means the card is kept, if not it is returned to the box. The player with most cards after 5 or 10 minutes wins! The winner may not be who you expect as this fabulous game is about observation and memory, not learned facts! BrainBox ABC contains 52 cards, all the letters of the alphabet and letter blends such as "the" and "ch". A great way to start your ABC, cards show simple images to help associate words with letters.
PostTweetShare Share with WhatsApp Share with Messenger
Community Updates
Amazon DealsAmazon discount code
If you click through or buy, retailers may pay hotukdeals some money, but this never affects which deals get posted. Find more info in our FAQs and About Us page.
New Comment Subscribe Save for later