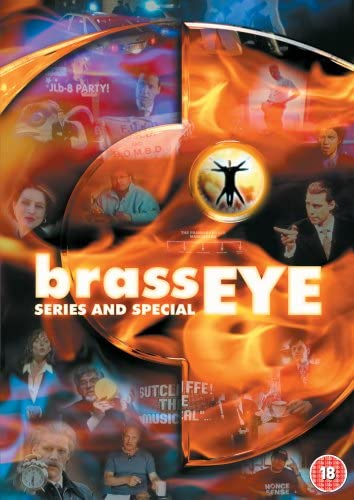 The most excellent Brass Eye and a cheap way to snigger and giggle and cringe at the same time through an evening or two.
All six episodes from Chris Morris's controversial spoof on current affairs television. 'Animals' includes Paul Daniels' impassioned appeal on behalf of a distressed elephant. 'Drugs' features a host of celebrities condemning the made-up drug Cake. 'Science' has Steven Berkoff warn the nation about the dangers of heavy electricity. 'Sex' explores the difference between Good and Bad AIDS. 'Crime' features more on-the-spot, up-to-the-minute reporting from newshounds Libby Shuss, Ted Maul and Alabaster Codefy. And 'Decline' examines a Britain in which pop groups record love songs to Myra Hindley and large companies encourage their employees to experiment with drugs. Also included is the notorious 'Paedophilia' special, which features Phil Collins speaking 'Nonce Sense'.
PostTweetShare Share with WhatsApp Share with Messenger
Community Updates
Music Magpie DealsMusic Magpie Discount Codes
New Comment SubscribeSave for later
Top comments
20th Apr
"This man was disguised as a school for 12 years"
20th Apr
This was the one thing we didn't want to happen.
23 Comments
20th Apr
"This man was disguised as a school for 12 years"
20th Apr
Cake is a made up drug
20th Apr
In 1975 No One Died.
20th Apr

"This man was disguised as a school for 12 years"

Great show.
20th Apr
Nasal mucous caused by a massive attack of conjena.
20th Apr
Go back one series to The Day Today and see the TV birth of Alan Partridge.
20th Apr

That was the day today.which in itself was exceptional television.
20th Apr

Nasal mucous caused by a massive attack of conjena.

And hit a few people as your saw
20th Apr
Crushed by heavy electric?

Heated OP!
20th Apr
This was the one thing we didn't want to happen.
20th Apr

"This man was disguised as a school for 12 years"

(that should stop the HUKD language police coming after me)
20th Apr
"I’m going inside now... like a bad boy."

Go back one series to The Day Today and see the TV birth of Alan Partridge.

Or go back to On the Hour and witness the radio birth of Alan Partridge
Edited by: "t4v" 21st Apr
21st Apr

buggered electrons
21st Apr
thanks ordered
21st Apr
Should come with a free filing cabinet to hide your children in safely.
21st Apr


Wasn't that The Day Today? Featuring, if I'm not going crazy, Steve Coogan?
21st Apr
I was a bit too young for Brass Eye the first time it was on. But happily, I was 15 when, in 2001, the final episode aired with I think a long disclaimer by the BBC that "what you are about to see is satire, etc. etc." or even like a 15-minute program debating whether the show should be shown at all or something equally hand-wringingly cringe-worthy. In fact, I think they took the opportunity to air at least the Cake episode in 2001 as well because I remember that one vividly, too.
21st Apr

Channel 4
21st Apr
Are you the bozboz?
21st Apr
Brasseye is available for free on channel 4s all4 online.
22nd Apr

In 1976 there was the incident with the Pigeon.