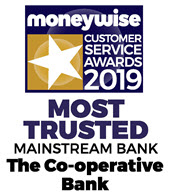 So I was with nationwide shopping around for better deals after they got rid of there interest.

Co-op Bank's Everyday Extra account comes with worldwide family travel insurance (including winter sports) up to your 80th birthday, plus smartphone insurance for the account holder(s) and UK and European breakdown cover. While the cover for families isn't as good as the Nationwide account above, it covers older travellers (up to 79) as standard. At £15/mth but you can earn up to £5.50/mth which can actually make it cheaper

Be rewarded up to £5.50 a month
£4 for each month if you qualify
Up to a maximum of £1.50 extra for debit card spending each month you qualify. If you meet the criteria below, you’ll be rewarded an extra 5p every time you use your debit card to pay for things.
No extra cost for opting in to Everyday Rewards
To qualify you need to do the following in a calendar month
Pay in a minimum of £800 to the nominated account.

Transfers from other Co-operative Bank, Britannia and smile accounts do not count.
Stay in credit, or within your agreed arranged overdraft limit on the nominated account.
Log in to Online Banking or the Mobile Banking app at least once during the month.
Remain opted in for Paperless Statements on your nominated account.
Pay out at least four Direct Debits from your nominated accoun
PostTweetShare Share with WhatsApp Share with Messenger
Community Updates
Co-operative Bank Deals
New Comment Subscribe Save for later
18 Comments
6th Jan
How is this compared to Nationwide Flex Plus? I know flex plus family insurance covers everyone in the family travelling with you.
6th Jan

It doesnt cover everyone in the family its only partner/spouse and dependant children who live with you.
6th Jan
Thanks, Op! Good alternative to Nationwide, whom I am with at the moment, and may be of interest to some, especially anyone approaching their 70's.
However, last year I travelled to America twice, broke down in the UK twice, and had my daughters' iPhone repaired. So used all three Nationwide benefits more than once, and without a hitch, which makes me reluctant to change banks.
The main benefit you mentioned is if worldwide travel insurance cover is for ages up to 79, as Nationwide is 70 unless you buy an add-on, although I have a few years to go yet!!
Although, as mentioned above by @phatbear ...It doesnt cover everyone in the family its only partner/spouse and dependant children who live with you.
It costs £15.00 with a potential £5.50 back in rewards, whereas Nationwide is £13.
However, biggest bonus for me with Nationwide is their future saver account, which I add £5,000 to per year, and pays 3.5% interest per year on the total amount.
If Co-op do another switching bonus, I might concider moving, but for now, Nationwide is the better option for me.
Edited by: "Bestbitter" 6th Jan
6th Jan
Excess is £50 on android phone nationwide it is £75 on this one. Not a fan of AXA insurance for the travel insurance side of things heard they are not great to deal with (they could be great just relaying what I have heard)
6th Jan
Future saver account is a children’s account! Though you say you are in your 60’s??
6th Jan

Both the travel and phone insurance on both are a pain to deal with. I take out separate policies with companies I know will pay out.
6th Jan

You had bad experience with nationwide claiming on both of those?

I have done phone claims on Nationwide and also on the old coop privilege account (presume the new one is similar) they were both the same process and pretty efficient. Think it was the same 3rd artsy company that dealt with the claim. I think the excess was less on the Nationwide policy although on my form this year it is given as £125 for theft (Apple) and £75 for damage I don’t remember it being different for the 2 types of claim on Co-op. The only thing I have against a Co-op account was they treated staff very poorly a few years ago when they merged with Another bank my sister was offered to do her same job for less money or take redundancy after 20 years service! She was being paid a rubbish wage anyway so took the redundancy and hasn’t looked back.
6th Jan
I claimed when I lost my iphone and they were OK. They wanted proof that I actually owned an iphone before they paid out which was fair enough. I sent a screen grab of the receipt & a photo of the (now empty) box. They also asked for a police lost item ref and of course the police were too busy dealing with stabbings to provide one so that was just daft and a waste of everyone's time. I also claimed for a cancelled holiday and they paid out based on two phone calls. They applied the policy excess twice (joint account) which was petty.
6th Jan
That ^^^ was nationwide BTW
6th Jan
4 direct debits required, as a joint account, 2x mobile, gas/electric in one, phone/BB so it is doable for most couples I guess
6th Jan

I think they've changed the phone thing now but you used to have to send your phone off so would be without a phone for days. The travel insurance company isn't the best and the excesses are high imo.
6th Jan

The best travel insurance I think it Aviva but it always costs around £25 for 5-7 days which adds up quick when you are going away a few times.

Is there any particular product you recommend which covers everything like this bank account? Or even individual policies which may work out cheaper?
6th Jan

I've done a phone claim, albeit for a damaged phone, not lost or stolen, with Nationwide. Easy to claim and phone back good as new in about a week.
6th Jan

Breakdown will be hit and miss depending on the area you're in. Nationwide has contracts covering a particular area. In my area, the company they use is running some neanderthal outreach programme. Both times they were useless. In the first instance, they acted like my car was running normally when it wouldn't even reach 40 mph. On the second occasion a few days later when it broke down completely, I insisted they tow it to a garage I trust. En-route I was surprised there was onboard entertainment. Unfortunately that entertainment was a rotund aesthetically-challenged gentleman driving telling me that various pedestrians would 'get it'. Those poor ladies, I suspect they never got to experience the undoubted delights of the Casanova seated beside me.

Funnily enough, my trustworthy garage found there was a problem and fixed it, and low and behold, my car was able to reach the dizzying speeds of 40+ mph once again.

For me, within my area, I rate Nationwide's breakdown cover as next to useless. They will not attempt to fix the issue. They will not even take a look for you. If I was really desperate, I might let them tow my car again depending on how far I am from civilization. However, in most instances, I'd sooner push it to my favoured garage myself. Maybe some passing ladies would be impressed enough for me to 'get it'.
7th Jan
The real moneysaving thing to do would be to use the Coop account to get your £5.50 a month. And then use Nationwide Flex Plus for the rest, thus saving £2.

So that's what I do.
30th Jan
Has anyone actually made a claim for travel insurance on either of the two provides? How was your experience? I'm with neither and my annual travel insurance is due for renewal. It keeps on going up every year to the point that I may consider getting one of these accounts as I take out breakdown cover as well. Thanks.