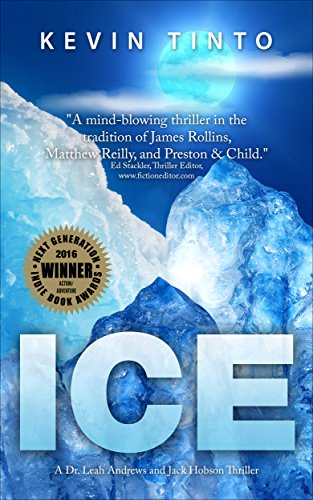 140 ratings Scores 4.5 Out Of 5 . Paperback is £9.30
If You didn't get this last time I posted it two years ago, well worth grabbing a free copy.
Winner in the ACTION/ADVENTURE category of the 2016 Next Generation Indie Book Awards.The debut bestseller that has sold more than 400,000 Kindle and paperback versions!


ICE!
Archaeologist Leah Andrews stumbles upon something inexplicable in southwestern New Mexico: inside a dark cavern lies an undiscovered, Native American cliff dwelling abandoned for 800 years. While twisting through one of the narrow underground passageways, Leah’s flashlight illuminates the remains of a violent massacre.

Ancient human remains—all slaughtered in a long-ago massacre—cover the cavern floor, along with a number of brilliantly colored, granite crystals. The rare crystals are native to only one place on earth: a frozen mountain range in central Antarctica.

Could Native Americans have traveled to the frozen continent of Antarctica 800 years prior to the first known human exploration? If so how? And why?

There’s only one person who can get Leah to those mountains in Antarctica: her estranged husband and climbing guide Jack Hobson.

At their destination, they make a stunning discovery that will change history and science forever. But Leah’s team is far from the only interested party.

As her secret makes its way to the highest levels of government, a race to seize the Russian-claimed Antarctic territory brings the world to the brink of nuclear conflict.

PostTweetShare Share with WhatsApp Share with Messenger
Community Updates
Amazon DealsAmazon discount code
If you click through or buy using any of our links, retailers may pay hotukdeals some money, but this never affects which deals get posted. Find more info in our FAQs and About Us page.
New Comment Subscribe Save for later
10 Comments
29th Dec 2019
Thank you
29th Dec 2019