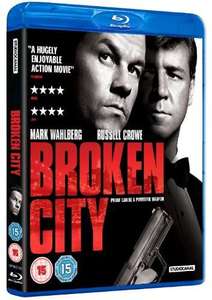 When disgraced cop turned private detective Billy Taggart (Wahlberg) is hired by NYC’s mayor (Crowe) to tail his wife (Zeta-Jones), he uncovers a city-wide conspiracy of corruption, sex, and murder.

From Amazon.co.uk
Producer and star Mark Wahlberg has attracted an impressive cast to Broken City, a film from director Allen Hughes. A mix of politics and crime thriller, Wahlberg himself stars as detective caught in the midst of a murky case, that brings him into the world of the Mayor of New York, played by Russell Crowe. Also in the ensemble are Catherine Zeta-Jones and the always-watchable Jeffrey Wright. When it comes to acting talent, you're not being short-changed here, and much of the fun is in watching the cast at work.

Where Broken City does stumble is in making the most of it all. For a film potentially dense in political intrigue and shady characters, it's the script that lets the side down a little. There's a real sense that there are more potent ingredients here than the final cut of the movie suggests, and that it doesn't commit hard enough to the story it's trying to tell and what it's trying to put across. That said, it's still an enjoyable movie you're getting here, that zips along and easily entertains. It's just one that doesn't fully fulfil its potential. Worth a watch, though. --Jon Foster