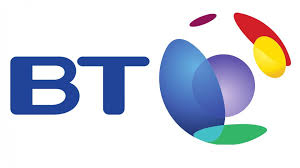 Must go through uSwitch to get the reward card and voucher.
PostTweetShare Share with WhatsApp Share with Messenger
Community Updates
Uswitch Deals
If you click through or buy, retailers may pay hotukdeals some money, but this never affects which deals get posted. Find more info in our FAQs and About Us page.
New Comment Subscribe Save for later
30 Comments
24th Nov 2019
I switched months ago and never to this day received any of the stated things, we have rang up several times to be told they can withdraw offers etc etc.... Seems like a ploy to get people into a contract!

I would persue that.

I have, I've wrote letters, spoke to god knows howany people including managers etc to still not have even one of the promised things it's actually shocking ....
24th Nov 2019

Claims for prepaid gift cards etc need to be progressed online via specific links. Writing letters or phoning will get you nowhere as these are setup and processed by separate companies. I got mine in less than 2 weeks and had no problem using it but had to claim online.

In this example you have to go via USwitch to get the deal and the benefits offered will come from different sources and not particularly BT.

I would say that you are too late to get anything back now as you usually have to claim within a set period of time after starting the service.
Edited by: "Neil49" 24th Nov 2019
24th Nov 2019

I've contacted bt and they are supoost to email a link to claim but they never emailed me it so I've contacted several times to be told they can withdraw or not firfill any offer at any time, but yet they are still advertising it which makes no sence to me at all and seems wrong on a moral and advertising level....

I've lost all respect for BT after this Ans will never go with them again!
24th Nov 2019

I have, apparently I'm not the only one
24th Nov 2019
Hi is this for new costumers only ?
24th Nov 2019
I have taken out a few BT deals in the last couple of years, I have always received the gift cards/vouchers.

Although, never had a good price to stay with them after the initial contract ends, so ended up switching to a new supplier.

Worst customer service I have ever dealt with. Avoid!

Yeah that sounds about right, I tried to leave guy said he would do me a deal by the time he was finished I would’ve been paying a £10 more. Back to Sky and happy as the Q is just an amazing piece of kit.
24th Nov 2019

I'd always trust what you are told on the phone as opposed to chat . Chat is often dealt with offshore as opposed to real UK based personnel that tend to deal with sales / retentions .
24th Nov 2019
The issue regarding the reward cards is uswitch. It’s got sweet fa to do with BT.
24th Nov 2019

no they don't email you, you have to manually claim the cashback card

Hi is this for new costumers only ?

It's an incentive to get you to sign up, but if you don't claim it, its no loss to them. They provide the link and details when you sign up then its up to you 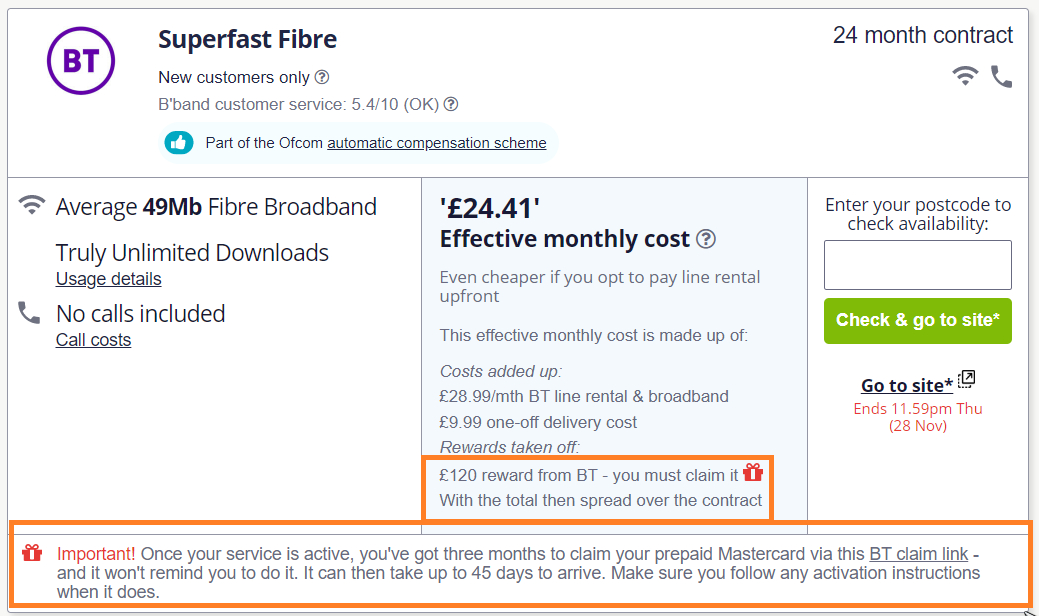 broadband.moneysavingexpert.com/bt-…als
27th Nov 2019
Is not strange that the offer finishes Thursday night? Maybe further reduction in the price for the black friday weekend and cyber Monday? What do you think? Worthy to wait for it?
28th Nov 2019
24 Month contract hmmm that is too long . . .
28th Nov 2019

I ordered. If I see a better deal, cancel and order again
28th Nov 2019
Just done this deal from TopCashBack and just got a text saying
"Hello, BT here. This is in regards to your order with us, due to a technical issue the order stands cancelled, do not worry we will be re-issuing the order after 48 hours and update you with the status. Please don't reply to this text - we won't see it. Thanks."

This sounds like a scam from BT so they don't have to pay out the cashback as the initial order won't track with them reissuing a new order.

If they do this I shall cancel and never return to BT again. What a sly thing to do!
28th Nov 2019

What's the update with yours? I took out the deal two days ago and suddenly received this text 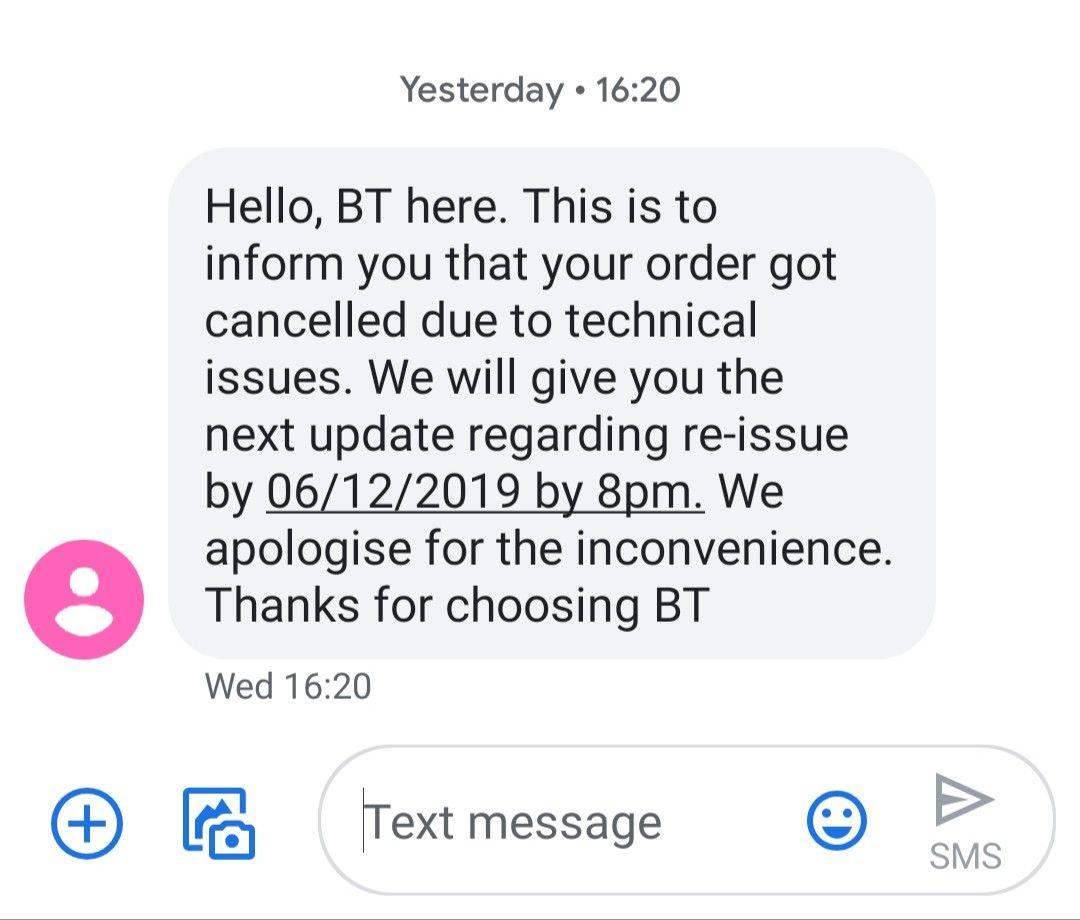 I got the message saying there was an issue but not to worry as they would put through again within 24hours.
This would have meant that it would go through on Black Friday itself. Seemed fishy and a way for BT to totally get out of tracking the Cashback.

So I decided to put the order through again through Topcashback again.

This time it did go through and the other remained cancelled even though they said it would go through.
My gut feeling was right as come Black Friday, the monthly fee went up by £1, Topcashback reduced around £20 and also the MasterCard dropped by £25 so £79 less cash in my pocket.

I now have my router (though same as what I already have, may have to fleabay it) and get switched over tomorrow.

So in a nutshell, think it’s sorted, even though BT tried to do me over....sly buggas.
only issue this time is now it’s 24 month contract but still massive saving 🏻