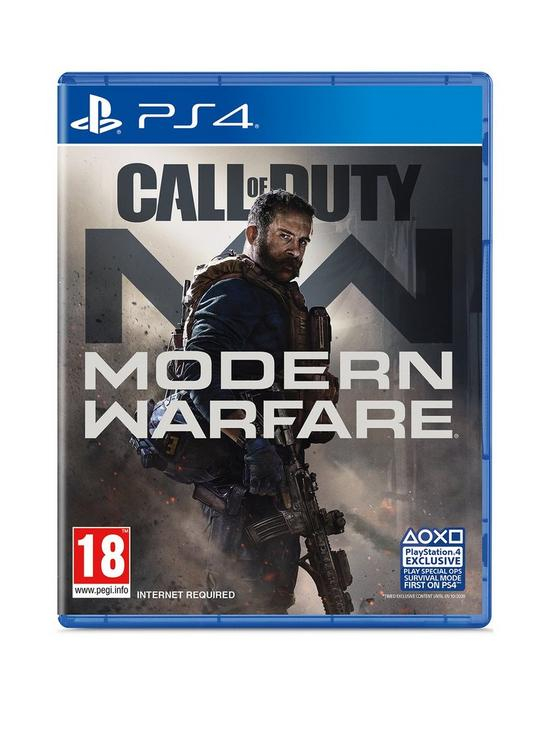 Everywhere is selling out fast so hope this helps someone. A few % cashback using Quidco too, more if you're a new customer.

The stakes have never been higher as players take on the role of lethal Tier One operators in a heart-racing saga that will affect the global balance of power. Call of Duty®: Modern Warfare® engulfs fans in an incredibly raw, gritty, provocative narrative that brings unrivaled intensity and shines a light on the changing nature of modern war. Developed by the studio that started it all, Infinity Ward delivers an epic reimagining of the iconic Modern Warfare® series from the ground up.

In the visceral and dramatic single-player story campaign, Call of Duty: Modern Warfare pushes boundaries and breaks rules the way only Modern Warfare can. Players will engage in breathtaking covert operations alongside a diverse cast of international special forces and freedom fighters throughout iconic European cities and volatile expanses of the Middle East.

And the story doesn¿t end there.

In Call of Duty: Modern Warfare, players will be thrust into an immersive narrative spanning the entire game. Experience the ultimate online playground with classic multiplayer, or squad-up and play cooperatively in a collection of elite operations accessible to all skill levels.

© 2019 Activision Publishing, Inc. ACTIVISION, CALL OF DUTY, and MODERN WARFARE are trademarks of Activision Publishing, Inc. All other trademarks and trade names are the properties of their respective owners.
PostTweetShare Share with WhatsApp Share with Messenger
Community Updates
Very DealsVery Discount Codes
New Comment Subscribe Save for later
13 Comments
5th Apr
Would be good deal if delivery was free
5th Apr

Would be good deal if delivery was free

Yeah there is a free option but I fear some won't use it responsibly.

Still the cheapest option even with delivery, anywhere cheaper is out of stock. Someone posted the Game offer but they're charging £5 for delivery.
Edited by: "y0j1380" 5th Apr
5th Apr

Would be good deal if delivery was free

Yeah there is a free option but I fear some won't use it responsibly.

just got it for £33.99 with quidco, I just completed the original remastered version from PS Plus today and it gave me a taste for more, thinking it will be hard to get for this price for a while too.

Plus I can pick up my eggs and milk at the same time when I run out in a few days and give my local corner shop come custom
Edited by: "TobiRIP" 5th Apr
5th Apr

Sensible mate, my plan exactly. Only collect when you're going for food and supplies people
5th Apr
It's a VERY good price tbh. Unsure why it's so cold in here though.
5th Apr

It's a VERY good price tbh. Unsure why it's so cold in here though.

Yeah not sure
5th Apr

It's a VERY good price tbh. Unsure why it's so cold in here though.

Why is that?
6th Apr
Well worth this price. Whoever voted cold is an idiot, find me a cheaper price for a physical copy. Probably couldn't get an account on the very website
6th Apr
Good price , cheapest around ... Bought it myself after the free time on the PS4 and brought me back to the good old days
6th Apr

Nice, was out of stock yesterday when I checked. This is still a quid cheaper with c&c though and it's only £34.99 total on Amazon if you have prime otherwise shipping makes it more. Great deal none the less and more convenient for most if they have prime.
9th Apr
33.99 at very if you do click and collect , best price available at the moment