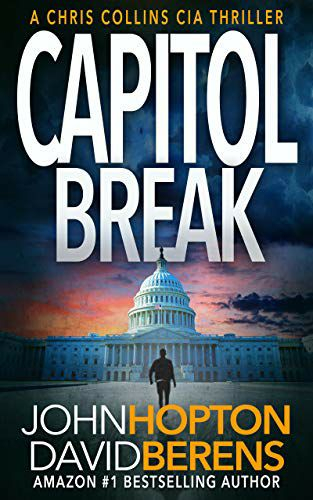 Could you save the world if your world was falling apart?

Chris Collins is a CIA Deputy Director with a history of rogue missions. He's lost his wife, his career, and maybe his friends...but there are new "friends" around every corner. And along with the new friends, some powerful new enemies.

On a bitterly cold night in Washington DC, Chris Collins is heading home to open his favorite bottle of red when his past walks right by him. A day later, his world falls apart. But he has no time to feel sorry for himself, as he soon realizes that evil forces are at work on an international scale and his country is under attack from within. There’s a job to be done.

In the midst of a personal crisis, he embarks on a global journey that takes him from the rugged coast of Ireland through the heart of Europe to the shimmering deserts of Morocco. He gets more than a little help from the mysterious stranger who keeps showing up in his life, but will it be enough to save innocent lives and bring some of the world's most powerful people to justice?

This is a page-turner thriller packed with non-stop action across exotic locations.

Read all about it in the first full-length novel in the hit Chris Collins CIA Thriller series. You'll laugh some, youl'll cry some, you'll hold your breath, and then you'll hope to hell he survives for another adventure.

"A riveting political thriller.""Straight out of the Mission Impossible or James Bond films.""Fun, fast-paced and intriguing."

"Honestly one of the best books I've read.""If I could give more than 5 stars for this novel I would."

Readers of James Rollins, Matthew Reilly, and Mark Dawson will LOVE this series. Pick up a copy, put the phone on silent, and lock the door—this is going to be an all-nighter!
Be sure to grab a copy of the action-packed prequel to the series: ROGUE ENEMY - A Chris Collins CIA Thriller. Get yours at tropicalthrillers.com!
PostTweetShare Share with WhatsApp Share with Messenger
Community Updates
Amazon DealsAmazon discount code
New Comment Subscribe Save for later
7 Comments
16th Mar
Thanks OP. Link points to a different book though - might want to update it
16th Mar

Thanks OP. Link points to a different book though - might want to update it

No problem
17th Mar
All of a sudden, all these free books have become important. Thank you for posting.
17th Mar

You snooze you lose. Thanks tho OP