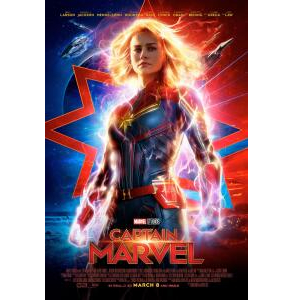 First price drop.
PostTweetShare Share with WhatsApp Share with Messenger
Community Updates
EDITOR
18th Nov 2019
Set in the 1990s, Marvel Studios’ Captain Marvel is an adventure from a previously unseen period in the history of the Marvel Cinematic Universe that follows the journey of Carol Danvers as she becomes one of the universe’s most powerful heroes. When a galactic war between two alien races reaches Earth, Danvers finds herself and a small cadre of allies at the center of the maelstrom.
ITunes Store DealsITunes Store voucher
If you click through or buy, retailers may pay hotukdeals some money, but this never affects which deals get posted. Find more info in our FAQs and About Us page.
New Comment Subscribe Save for later
16 Comments
18th Nov 2019
Good price but I’m all about Disney+ now and watching these in 4K HDR - I won’t be buying any more Disney films I suspect
18th Nov 2019
Disney so money hungry now they have + running they might remove all there films etc... from streaming sites
18th Nov 2019

Like all the good Marvel shows on Netflix, must be a part reason why
18th Nov 2019

Actually they have been doing that for years before streaming, it’s called the Disney vault have you heard about it? Google it!

Since VHS days, they pick certain films. Remove them from sale for years, people get cheesed off cos they can’t find the films they are looking for then suddenly they re release it when they feel like it years later.

i didn’t know about it until someone at work asked about 10 yrs ago they wanted something like beauty & the beast dvd and I said what are you talking about it’s everywhere to buy, at that time they removed it but only temporary before re releasing it again soon after you may be lucky and find a store with copies but once they are gone thats it until the re-release. So yeah they probably will do that, people in America already found a list of expiry dates for Disney plus, it’s very random too one is nov 2019 the other I think alladin expires in the year 3000

According to google Currently, the movies included in the vaultsystem are the following:Snow White and the Seven Dwarfs, Pinocchio, Fantasia, Dumbo, Bambi ,Cinderella, Alice in Wonderland, Peter Pan, Lady and the Tramp, Sleeping Beauty, One Hundred and One Dalmatians, The Jungle Book. As of 17 Aug 2019

Disney will not let apple upgrade their films to 4K for free, they insist that apple charge and extra £15 which they wont
18th Nov 2019
Its all fairly simple.
Start with Itunes movies DV/Atmos - bargains every week
Get Disney+ for Star Wars, Pixar, Marvell, Disney in DV/Atmos
Buy UHD disks if tin foil hat wearing is your thing
18th Nov 2019

Its £7 in Sainsburys - got it a couple weeks ago?

That’s £7 for standard definition dvd. This is for the HD version.
18th Nov 2019
Captain Marvel?

just no
18th Nov 2019
Just to say this is coming on Nowtv and Sky Movies this weekend. Just incase anyone has those subscriptions active.
19th Nov 2019

Without the tin foil bit, your comment is exactly what I would do.....kind of...since Disney+ is not "officially" available over here.
20th Nov 2019

That's DVD, this is HD so comparable to Blu Ray.

lol I thought that price was a bit low. You couldn't get a used copy for that price.