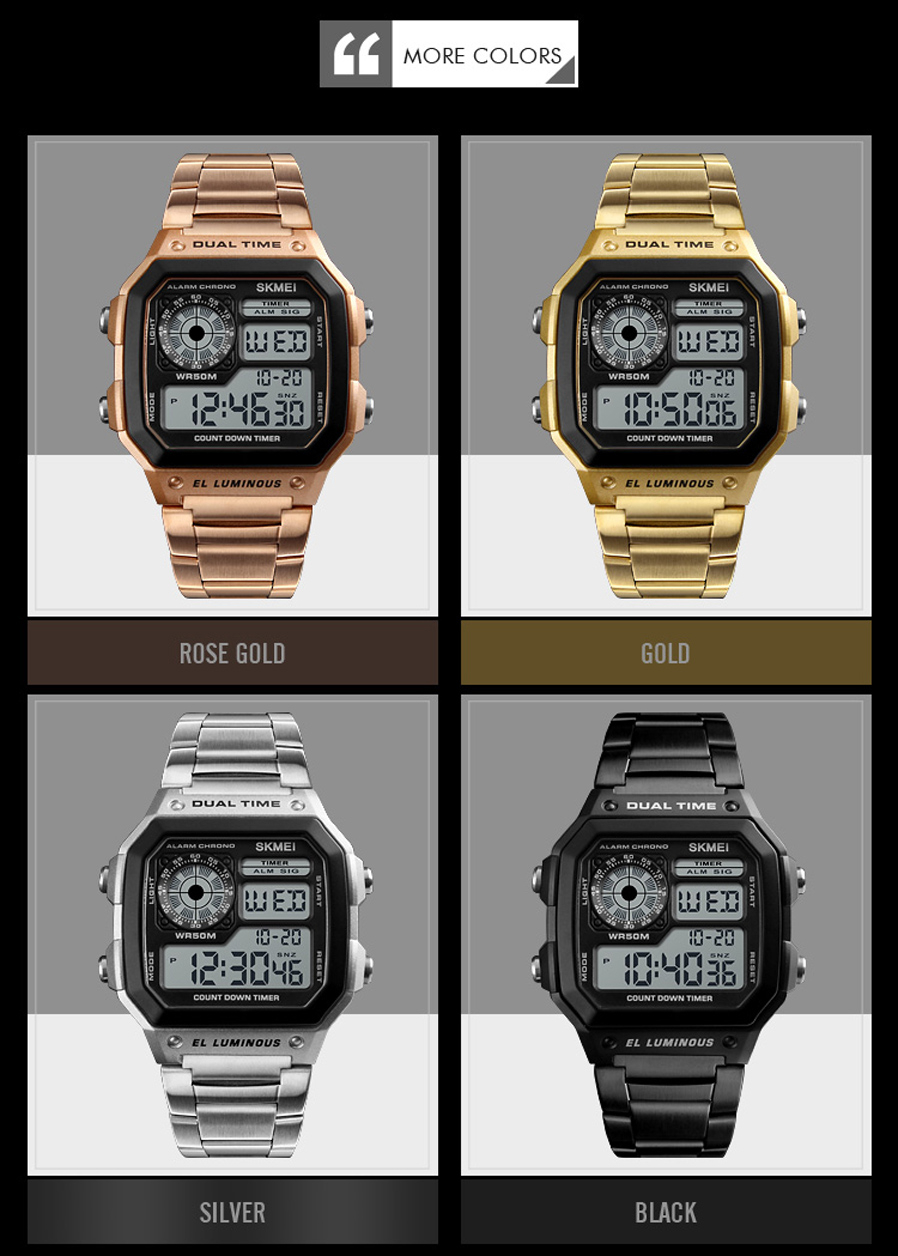 * See below for slightly cheaper ebay prices- from £4.99, and other colour/strap options hotukdeals.com/com…699 *

Flash Sale price. I think this may well go Cold, but, funnily enough, I was reading the "Best Of Aliexpress?" thread on Watchuseek tonight and had a chuckle at this (it was advertised on there for £9-odd)! Then I got a Gearbest email with the very same watch!
(Listed here on their Aliexpress Homages page and here on the main Aliexpress-themed thread)

The SKMEI has reverse EL light, the Casio AE-1200 - punnily called the "Casio Royale" - actually has LED light (if the difference matters to you).
The Casio is illuminated via 2 amber LEDs, which can be set to either 1 or 3 seconds illumination. The SKMEI has blue Electro Illuminesence, duration is set to 2 seconds.
The SKMEI doesn't have the World Time function of the Casio, only Dual Time Zones.
The SKMEI has 1 alarm - the Casio has 5, plus Snooze.
Casio has 100M Water Resistance, SKMEI has 50M.
Both have Stopwatch.

Of course the real thing can sometimes be bought for £14.99, so it all depends how skint you are!

Another thread, which is a more generalised SKMEI thread and isn't all about clones: forums.watchuseek.com/f71…tml 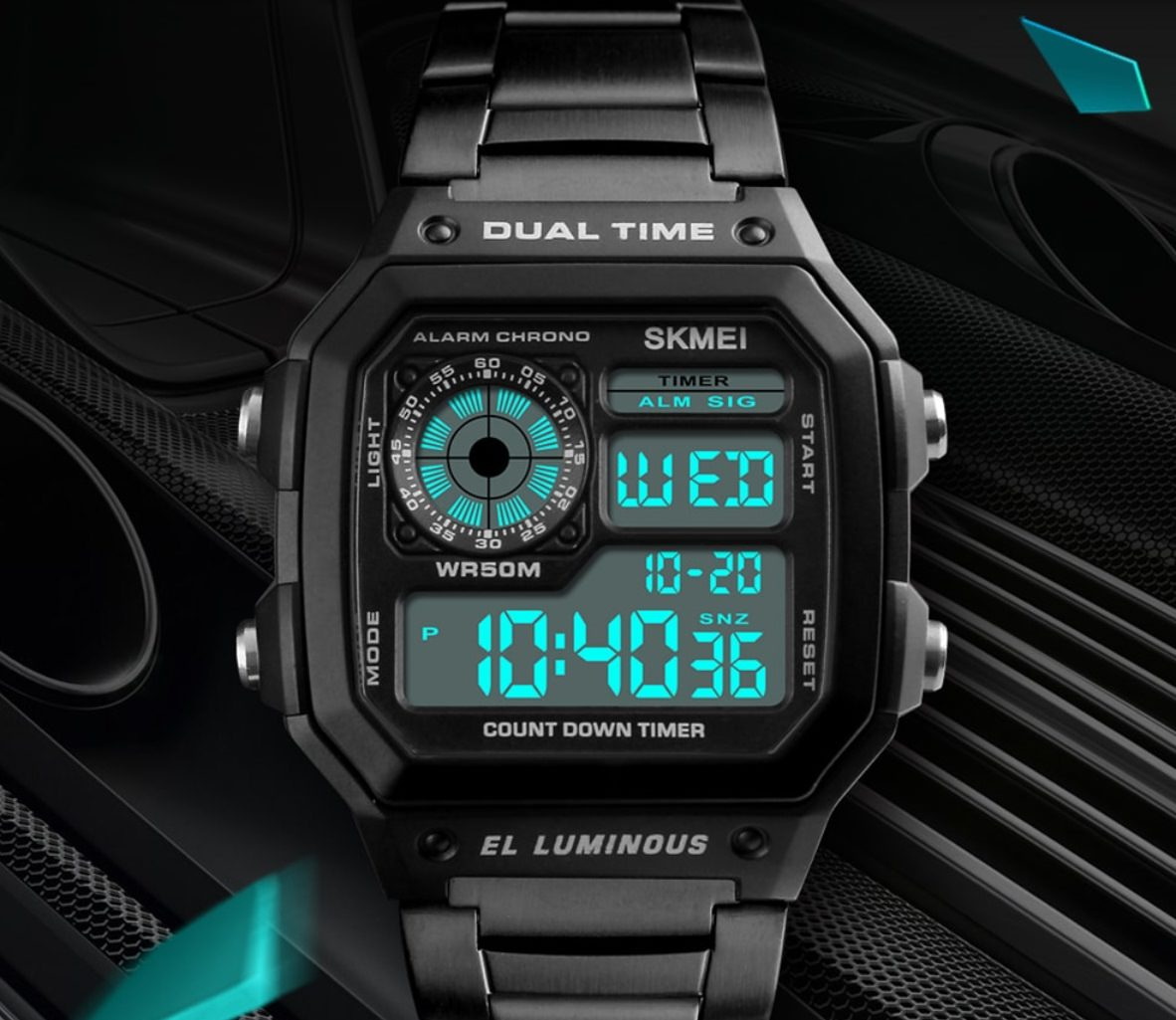 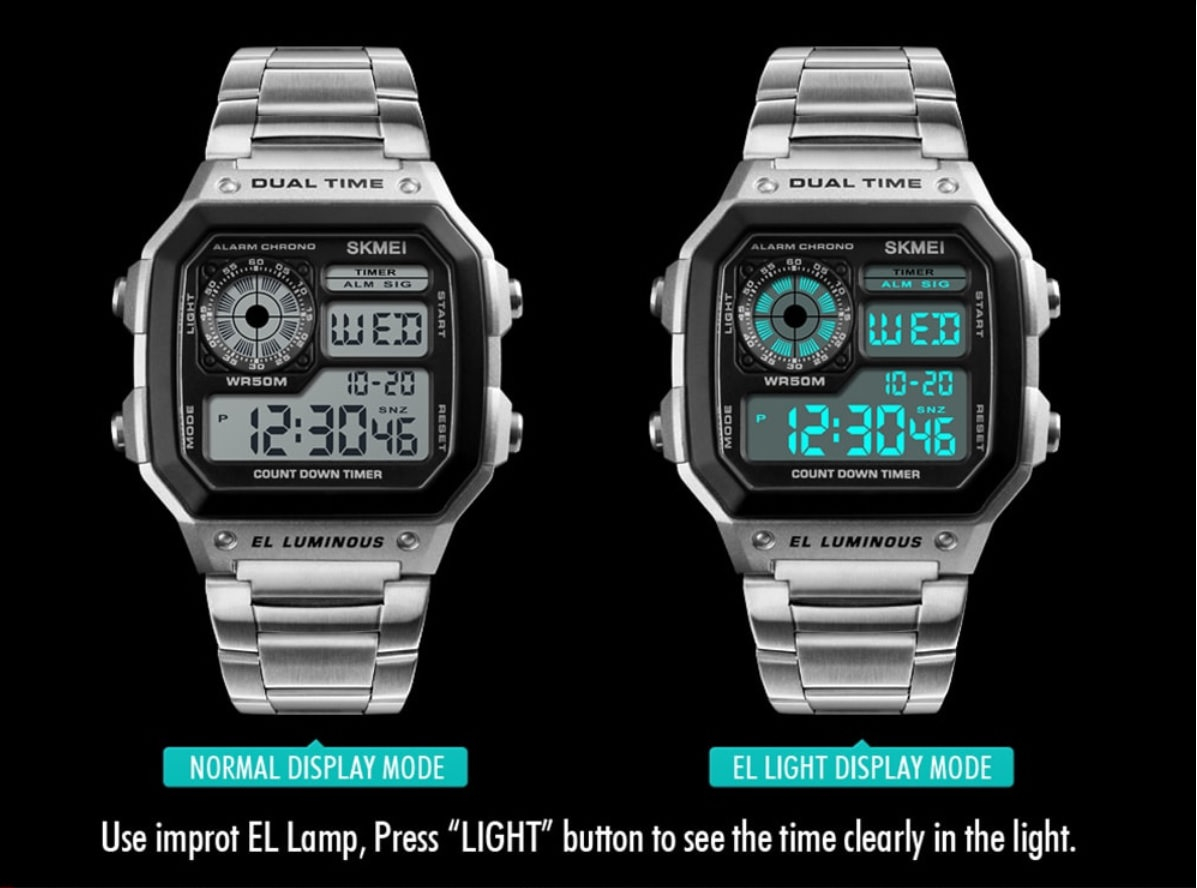 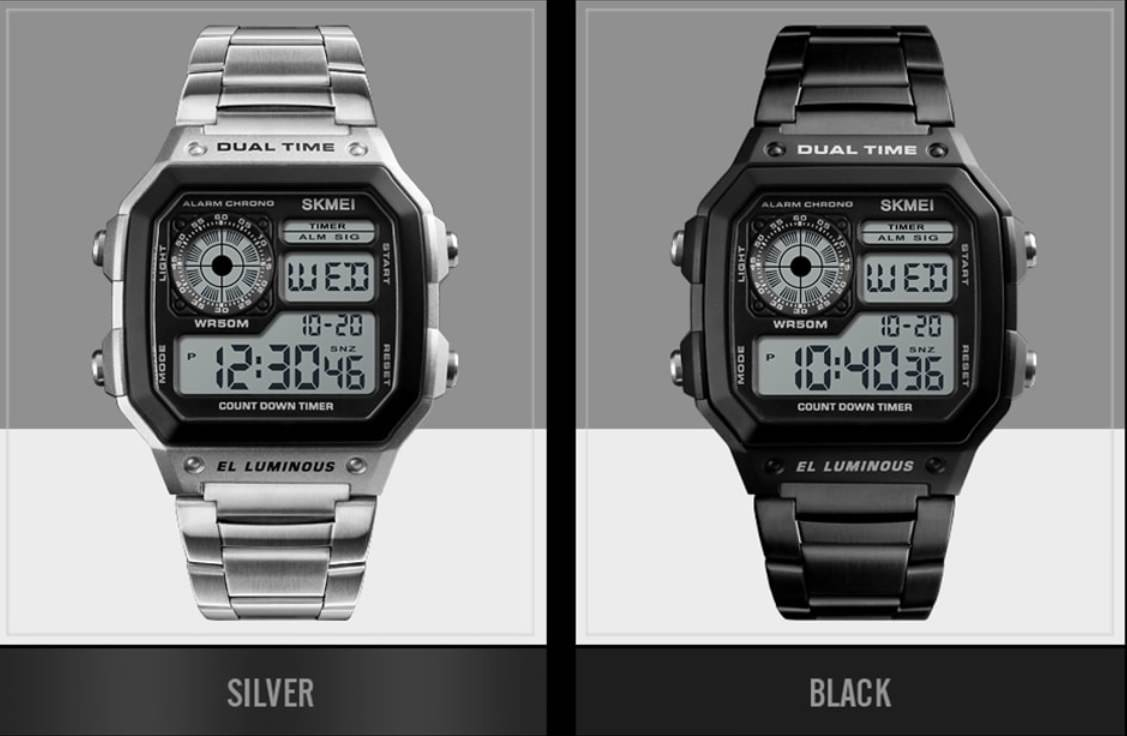 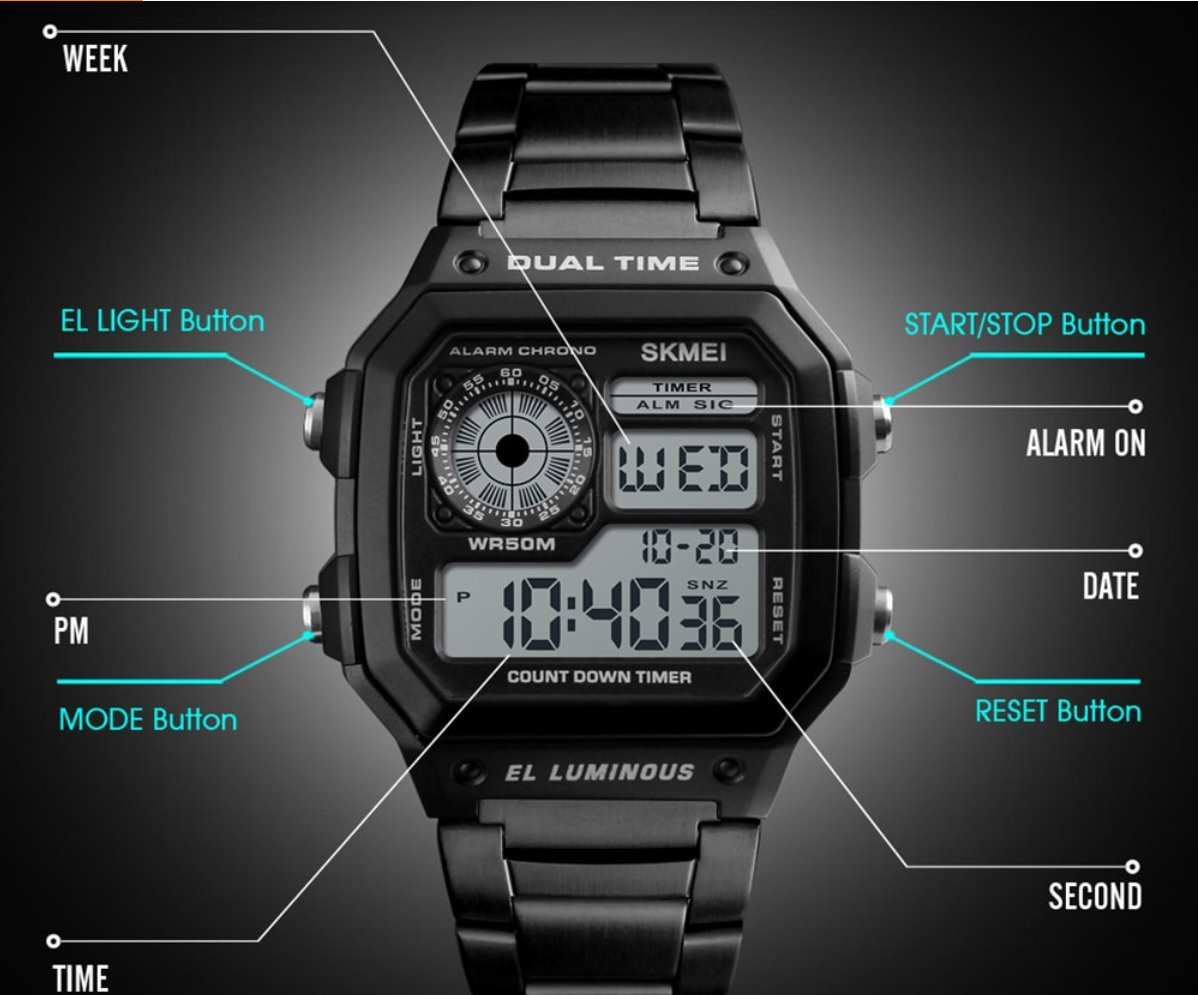 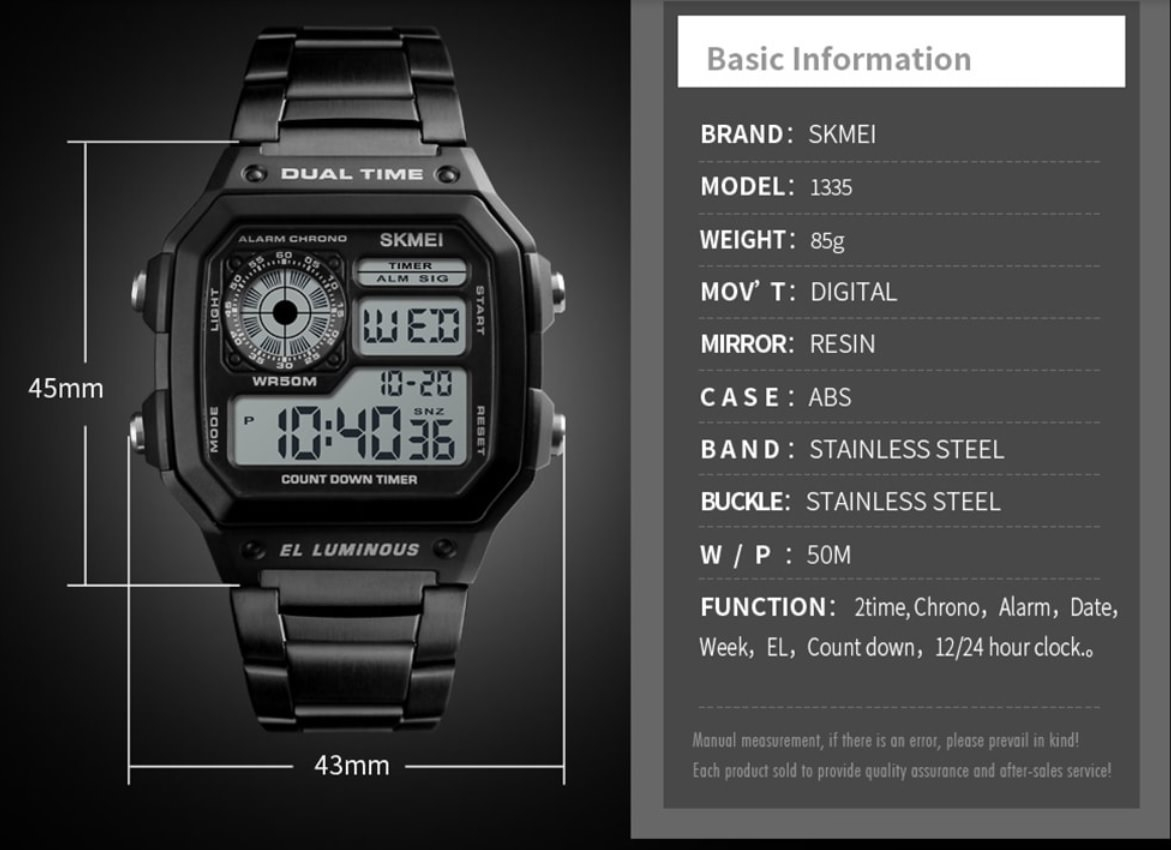 *For reference, the real Casio AE-1200's light looks like this (picture from d2mac on Watchuseek): 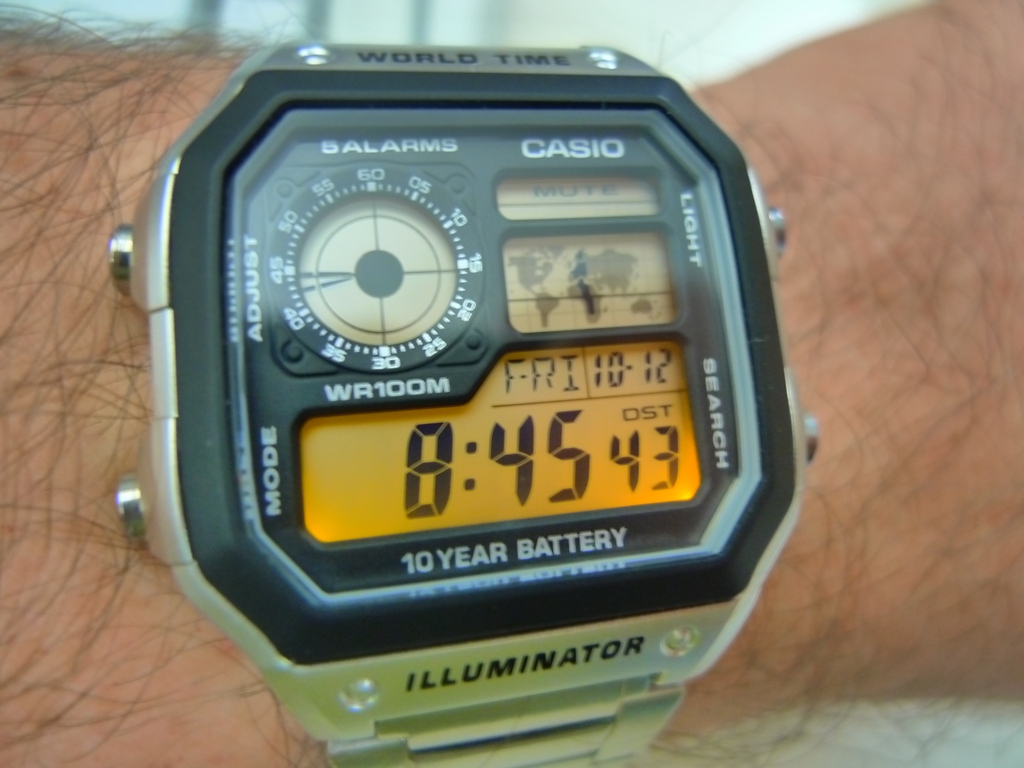 Lots of Feedback from this Aliexpress listing. 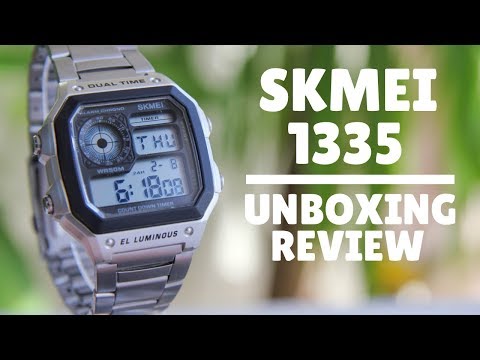 A more detailed review, with audio:
Around 2:41 he says the quartz module runs at about +0.8 secs a day. And then he burps... 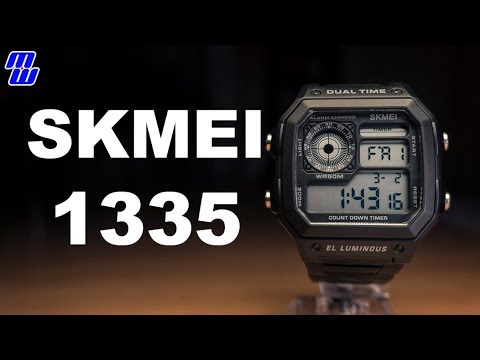 PostTweetShare Share with WhatsApp Share with Messenger
Community Updates
GearBest DealsGearBest voucher codes
New Comment SubscribeSave for later
Top comments
23rd Jun 2018
Why buy an inferior fake when the difference in price for the real thing is less than a tenner?
32 Comments
23rd Jun 2018
Well, whaddya know, you can get it slightly cheaper (£4.99 for Silver, prices go up to £5.79 for Black, Gold, Rose Gold) here ebay.co.uk/itm…038
You can get different plastic colours, and soft bands (Turquoise, Red, Army Green, Black) for £5.92‌ ebay.co.uk/itm…287 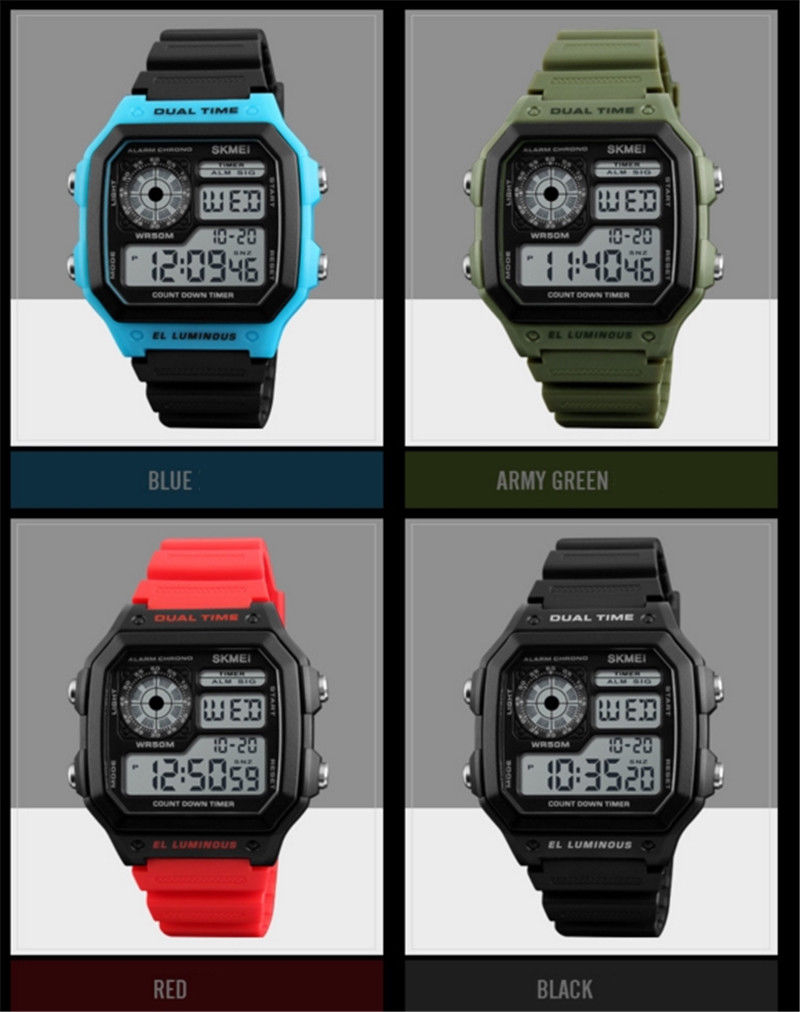 Here is an AE-1200 side-by-side by the SKMEI 1335 from this thread where both watches are taken apart (thanks to Capt Obvious and rednakes): 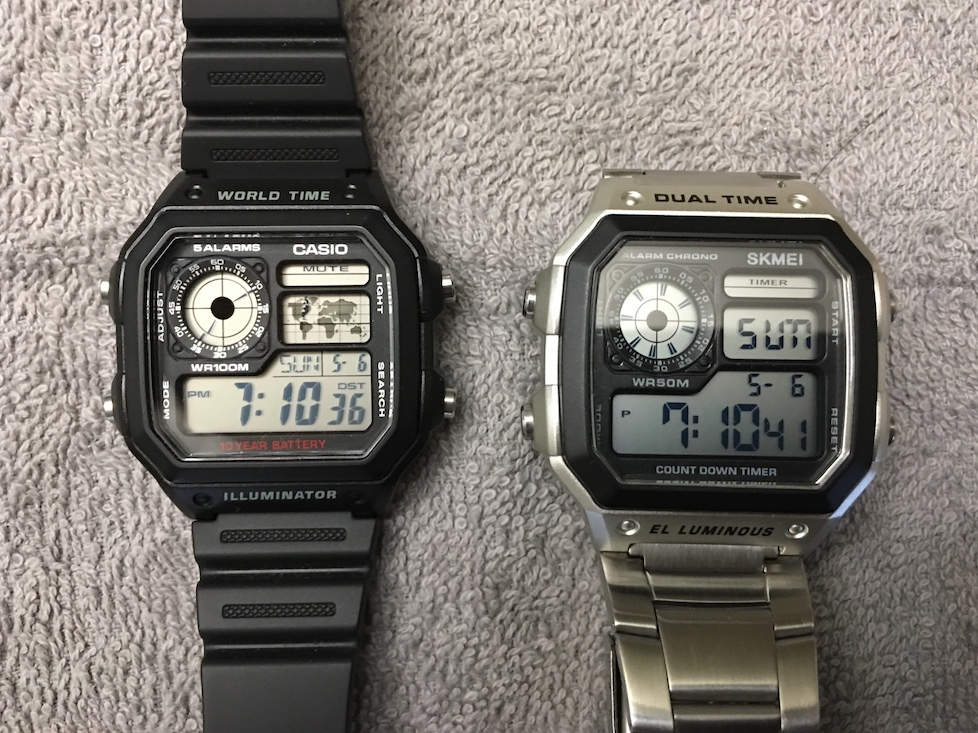 Edited by: "louiselouise" 23rd Jun 2018
23rd Jun 2018
Lashed out and went of the gearbest option. Will come in handy working in Oz and able to see UK time too
23rd Jun 2018
Why buy an inferior fake when the difference in price for the real thing is less than a tenner?
23rd Jun 2018

The real thing now in Argos has now gone back up to £29:99, could you give me the link please to where you have found this cheaper?
23rd Jun 2018

Just bought the same watch in gold colour, on eBay from a uk seller for £8:05 with free p&p, it should be here within 7 days, they also have different colours, hope that helps someone.

Wow that gold watch is really something! Del Boy would be all over it

Yeah pure class innit?
23rd Jun 2018
You know the casino royale photo is photoshopped right?
23rd Jun 2018
I have both the Casio and SKMEI version. I had hoped the SKMEI would use the “analog” display as a stop watch or timer but it’s just for decoration. Still a good price from the SKMEI.
23rd Jun 2018

You know the casino royale photo is photoshopped right?

I've read the entire Casio AE-1200 thread on Watchuseek - 67 pages long and counting - where many of the members mod their watches, eg (interesting to note that this is a "reverse illumination" mod, though not Electro Luminescence of course - but very similar to the SKMEI): 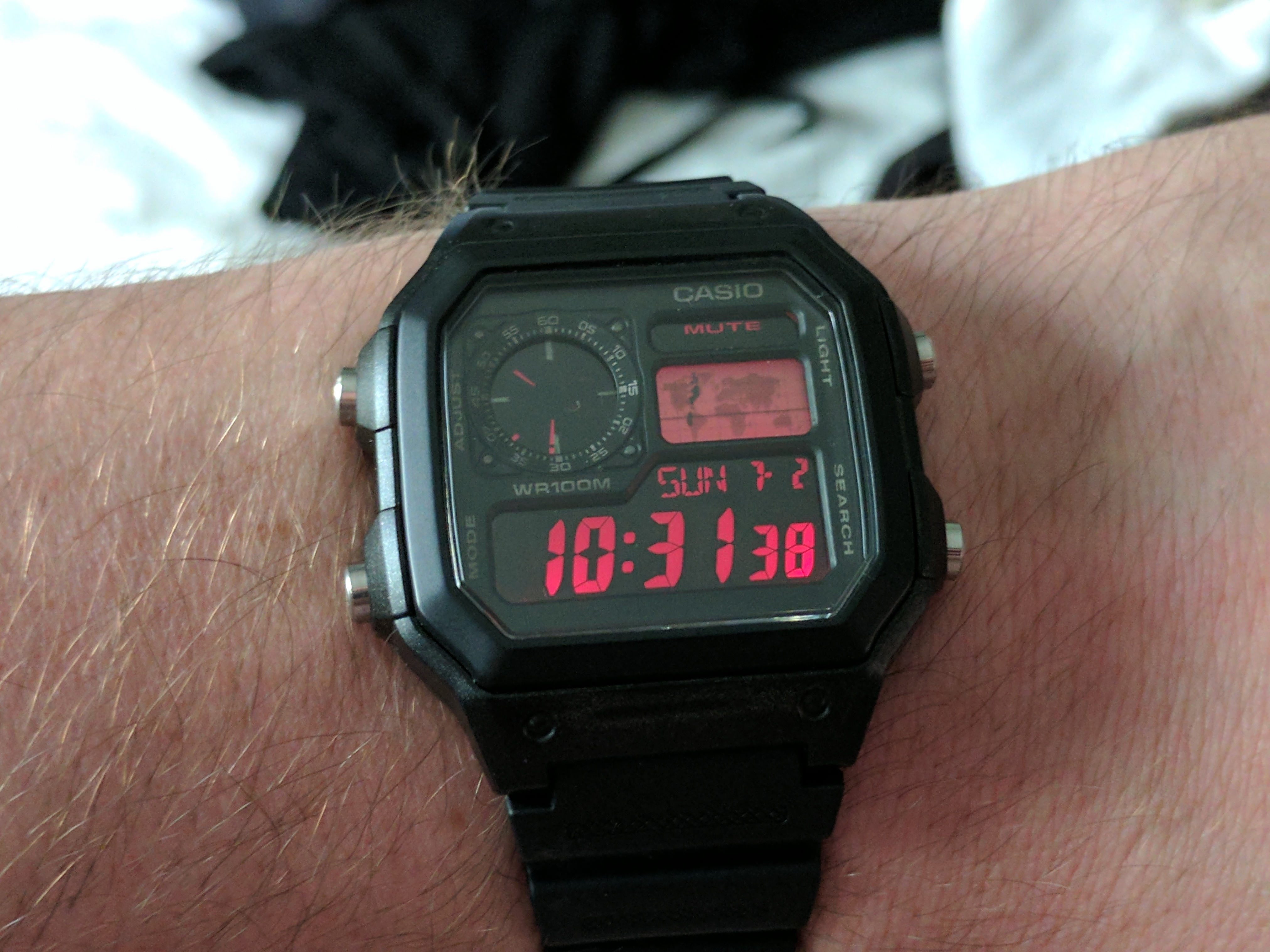 - I doubt my earlier photo is Photoshopped as it was pasted from a casual "show us your watch"-type discussion. But I'll add another picture of the LED in operation if that helps - I was just about to go to bed when I posted this 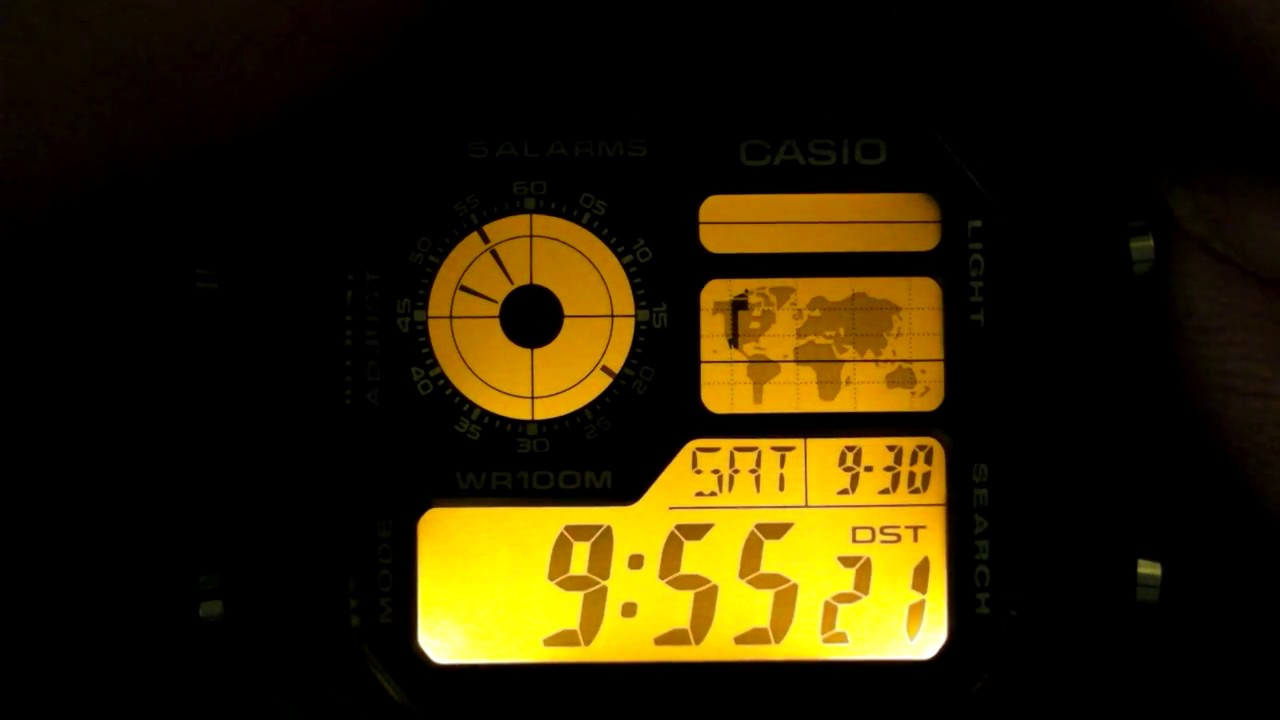 As for who would buy this SKMEI (weirdly, the "metal" versions are cheaper than the resin ones, on ebay, at least), maybe someone who wants to practice modding their Casio? A younger kid/teen at school? Holiday/work watch? Someone who likes clones? It's surprising how popular the Aliexpress thread is..many of the watches I'm not keen on, but there are a few gems.

Personally, I quite like the SKMEI 9120 "bauhaus-style" Nomos Homage (thanks to hanshananigan) - which comes in Mens' and Womens' sizes, and can be bought for a stupidly-cheap £3.82!! 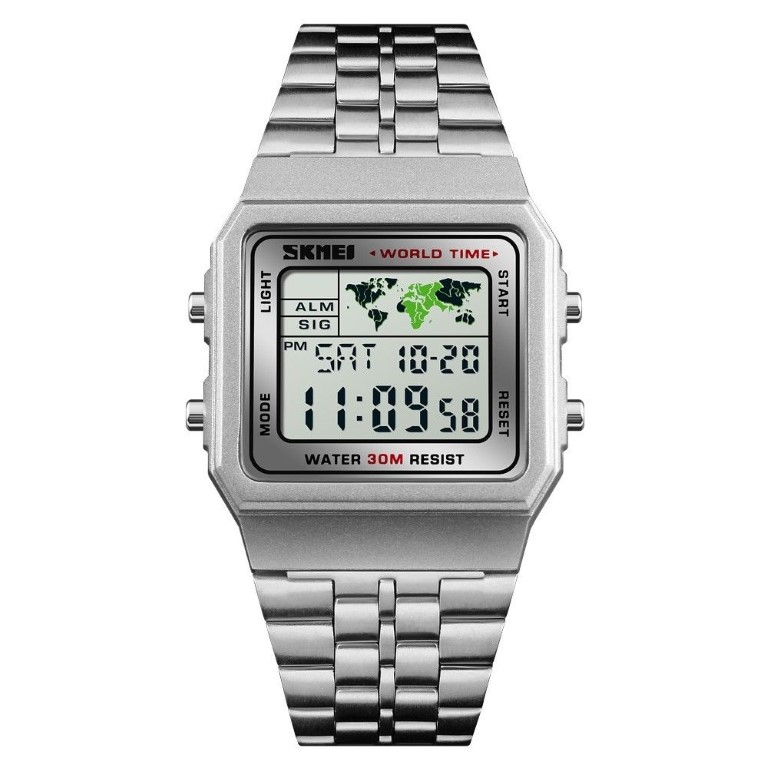 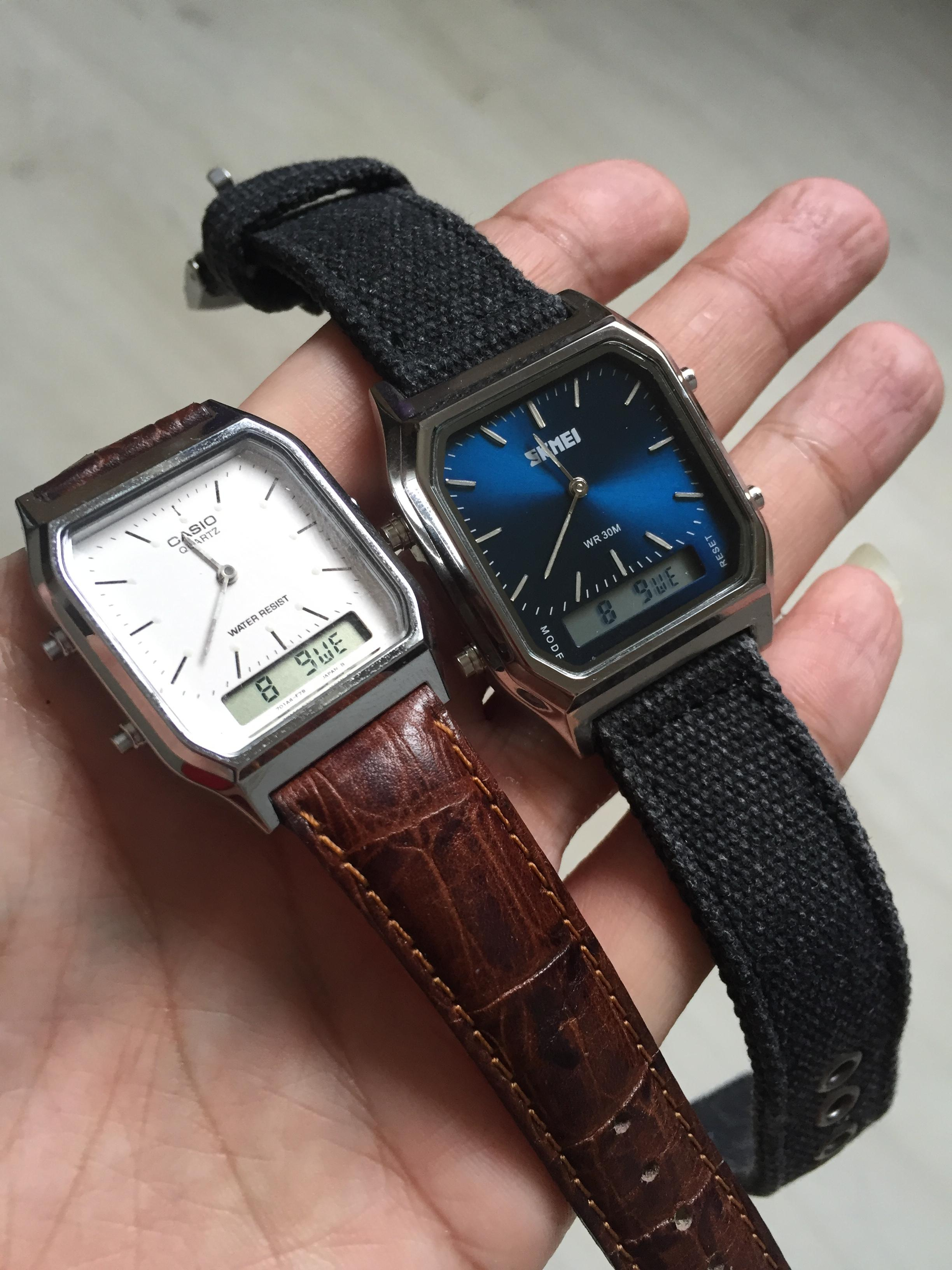 Even a Pro Trek knockoff! Visually, at least! forums.watchuseek.com/f23…tml 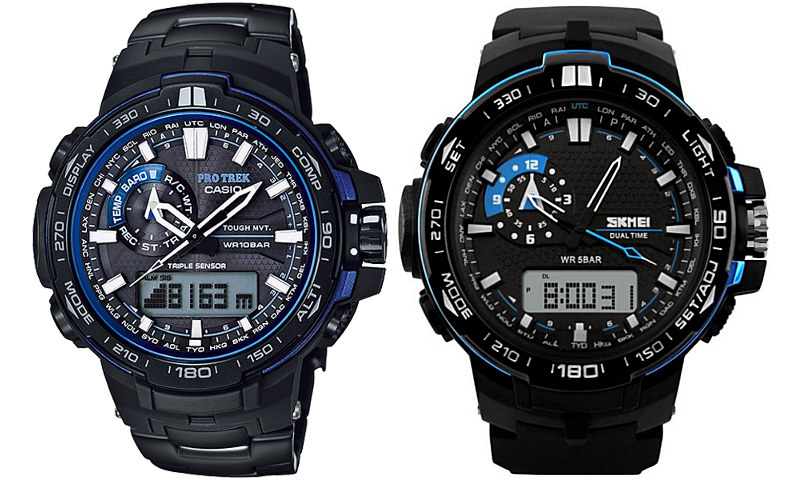 I innocently got reading about Chinese watches as I saw photos of the Sea-Gull 1963 (reissue) and fell in love with it - though that is not sold at SKMEI prices - unfortunately ‌ but is a totally different class.

agreed get the original.
Thanks for the link

Just about everything is faked. I got fake "On Fire" Koss PortaPro headphones years ago (in the days when they were around £15-20 on Amazon) - sent them back, of course. Foolishly thought as they were a Special Edition, counterfeits wouldn't really be out there.

But yeah, suppose the SKMEI is just a "burner" watch to wear when you don't want to wear your posh ones - or you just don't want to spend a lot of money I would be concerned about the watch not being accurate, but most WUS-ers seem pretty happy with their SKMEI Casio clones.

There's another Extremely Inexpensive Famous Watch Homage Club thread on WUS, which I'll have a look through. 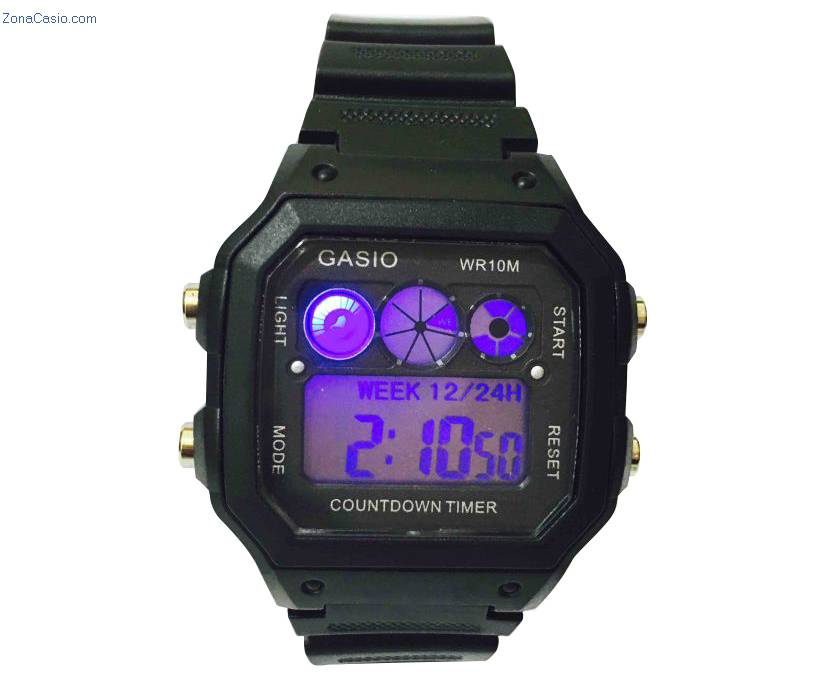 Yeah, I'd suggest just keeping an eye out for a good price on the real thing - aside from anything else, the cheap Chinese watches generally keep pretty poor time compared to Casio for some reason. I'm not sure why China can't produce digital watches that are good value for money compared to the biggest, most recognizable name in the business that pretty much everyone buys by default, but just they don't seem to be able to.

There are good Chinese watches out there, which is why I added my comment about the Sea-Gull 1963 (it's also how I got reading about Aliexpress and elsewhere, clones and originals) - not that I'm suggesting the SKMEI is of the same ilk. But it doesn't always mean Chinese watch = trash.

As I said, above (read quite a bit about this SKMEI 1335 watch, sad, I know) I haven't seen anyone complain about time-keeping, so I'd assume it's okay. Would I wear it? Probably not, but I'd wear it as a holiday watch.

This one from here is pretty funny, though [Image]

Or the real version is 300% more expensive...
24th Jun 2018
Just 'clocked' on to these Aliexpress watches and have ordered 3 in a week, 2 Tag Monaco Homages one by Jaragar and one by Paularies and another by Tevise which is a Rolex Homage.

These are not fake as they don't carry the names, they are done in the style of the originals and I must say they are great quality, all 3 are semi automatic for less than 20 quid each, I would rather buy these than some overpriced quartz watches.

Although a homage to a Casio is a bit confusing given how much they cost?

I also have done a lot of reading on WUS and plan on using it for future purchases, next on the list is a U-Boat homage ;-)

Here's one of them, lovely watch. 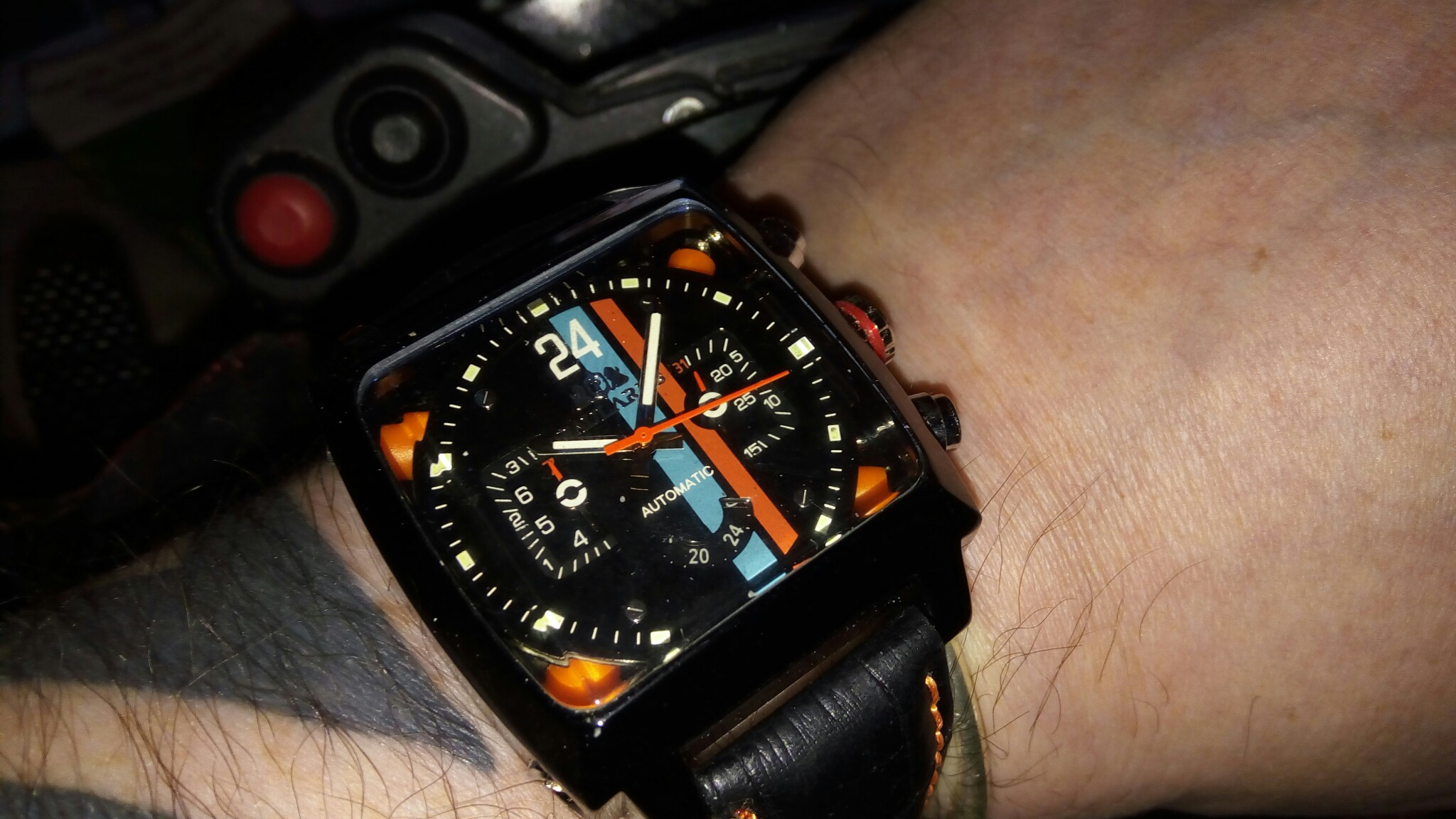 I really like the quirky Chinese ones...what matters is (obviously) that is keeps good time and has an element of wearability/longevity...I really think the no-names are better keeping their watches "sterile" (brandless) - I know a few more creative WUS-ers do take matters into their own hands

The only cheap watch I've ever bought (but it only cost about £2) was a "Rose" Geneva Michael Kors Chrono knockoff - it looked good from a distance, but the Chrono function doesn't work (didn't really expect it to, for the pocket money price) and the bracelet is hollow and rattles. It really is a bit of a lucky-bag watch.

Only wore it a few times and my money was better spent on the Caravelle (Bulova brand) knockoff that Argos sold for £12-13 about a year ago. Looks, feels, and functions like the real thing (some may even dispute that it's better made than a real Michael Kors, and they'd probably be right!)

I'd really love to know where to get a Sea-Gull 1963 for an un-crazy price, but I'm going off on bit of a tangent.


Edited by: "louiselouise" 24th Jun 2018
29th Jun 2018
With the £3 offer at Topcashback this weekend some of these watches can be got even cheaper. This one for about £2.50 in stainless steel after the £3 and few pence of cashback plus a few nectar points I guess. A bit more expensive for the rose gold and gold finishes.

For some reason I quite like the idea of having a clone watch even a clone of a Casio.

Edit: Seems Gearbest's prices have went up by a few £, so best Expiring this, but the ebay prices I mentioned are still ongoing.

That link you gave has £4.99 plus £1.99 postage but the link I used starts at £5.64 including postage so a lot cheaper unless there is some way of removing the additional delivery charge. Maybe originally there wasn't the delivery charge on that supplier?
30th Jun 2018

Sorry. I'm pretty sure that listing didn't have P&P before, but I could be having a blonde moment (more than likely)!

23rd Jul 2018
These are now £6.64 in Gold and Silver, but the Gearbest listing suggests there's only a few left

I also recently added another Youtube review to the original post - Around 2:41 he says the quartz module runs at about +0.8 secs a day. And then he burps...

Edited by: "louiselouise" 23rd Jul 2018
7th Aug 2018
Got my silver model today, very slow delivery. Simple packaging in flat jiffy bag. Love the watch, nicely made and very retro. I did the £3 topcashback thing at the time, normal ebay cashback and few nectar points so it cost about £2.50 all in. It feels marginally inferior to Casio. The strap machining for the buckle just a smidgen rougher than you would get on a Casio I would say but really not noticeable unless you look for it.

The ebay seller I linked to uses a very slow delivery service. The product is great and well packed but must be using the very cheapest option as delivery was well over a month.
7th Aug 2018

Looks as though the analogue LED of the 1382 shows the seconds passing by, rather than simply flashing as on the 1335. Sorry for the Vietnamese Youtube review, can't see any English reviews yet. Not sure why this reviewer keeps the blue screen protector plastic on the screen, either. 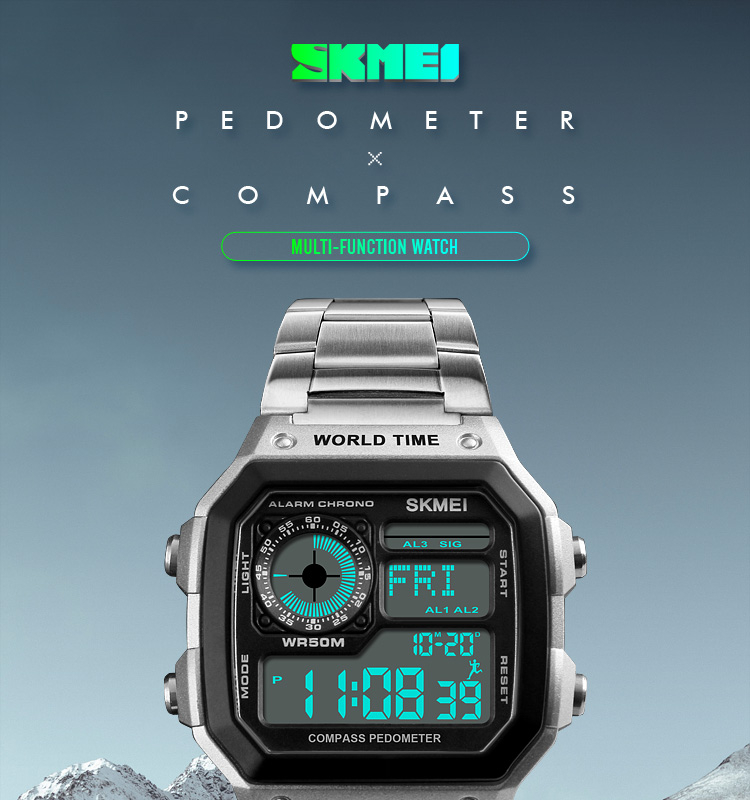