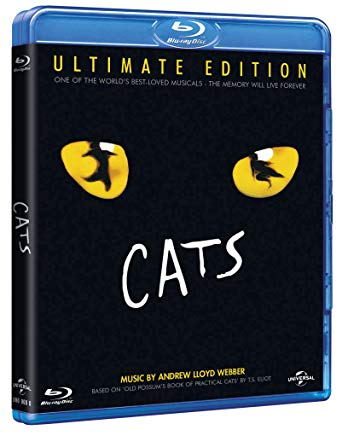 One of the longest-running musicals in West End and Broadway history has now been re-mastered in high definition for Blu-ray.

Andrew Lloyd Webber’s Cats, one of the most famous musicals of all time, first exploded onto the West End stage in 1981. 'Memory', one of its many classic songs, became an instant worldwide hit. Since then Cats has smashed records and conquered the world.

Boasting an all-star cast headed by Elaine Paige and Sir John Mills, breathtaking visuals and the full digital sound of an eighty piece orchestra, this Ultimate Edition Blu-ray will lead you deep into the mysterious world of Cats. This is Cats as you’ve never seen it before: more mesmorising and magical than you could possibly imagine.

PostTweetShare Share with WhatsApp Share with Messenger
Community Updates
Amazon DealsAmazon discount code
New Comment Subscribe Save for later
3 Comments
15th Feb
Heat added just because it's not the awful movie from last year. Jeez....I've had rectal examinations that were more enjoyable than that
15th Feb
I saw that, thought about posting it but realised it wouldn't do well
16th Feb

I saw that, thought about posting it but realised it wouldn't do well

Yep Cats is ruined forever now.
They cancelled the 4K release of the new one. Not shocked.