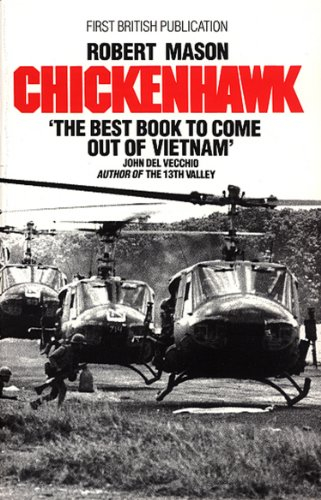 A stunning book about the right stuff in the wrong war.

As a child, Robert Mason dreamed of levitating.

As a young man, he dreamed of flying helicopters - and the U.S. Army gave him his chance.

They sent him to Vietnam where, between August 1965 and July 1966, he flew more than 1,000 assault missions. In Chickenhawk, Robert Mason gives us a devastating bird's eye-view of that war in all its horror.

He experiences the accelerating terror, the increasingly desperate courage of a man 'acting out the role of a hero long after he realises that the conduct of the war is insane,' says the New York Times.

'And we can't stop ourselves from identifying with it.'

CHICKENHAWK contains the most vivid, astoundingly intense descriptions of flying ever written. It is a devastating account of men at war, of courage and cowardice, boredom and exhilaration, lasting friendship and sudden death. It is not a book for weak stomachs, but its powerful message will stay in the memory long after the last page is turned.
PostTweetShare Share with WhatsApp Share with Messenger
Community Updates
Amazon DealsAmazon discount code
New Comment Subscribe Save for later
Top comments
18th Jan

Why are people voting this negative? It's a good deal!

Doesn't matter to me in any shape or form as as long as the deal helps one person out that's all that matters to me at the end of the day
Edited by: "tiggerloveslife" 18th Jan
29 Comments
18th Jan
Classic
18th Jan
Why are people voting this negative? It's a good deal!
18th Jan

Why are people voting this negative? It's a good deal!

Looked on Amazon. Couldn't see it. Did you mean
The Ice Man: Confessions of a Mafia Contract Killer
by Philip Carlo?
18th Jan

Apologies, I meant 'the ice man'

"He conducted this sadistic business with cold-hearted intensity, never disappointing his customers. For an additional price, he would make his victims suffer. By his own estimate, he killed over 200 men, taking enormous pride in his cunning and the ferocity of his technique."

It's a fascinating book. His first kill was a random dog walker who he killed just to prove to the mafia he was willing to do it at the drop of a hat. I think it's £6 on Amazon.... Easily worth it.
18th Jan
Jesus Nut!
18th Jan
Excellent book, recommended
19th Jan
I don't usually read books as I don't have the patience. This is the only book I actually managed to read to the end. Loved it.