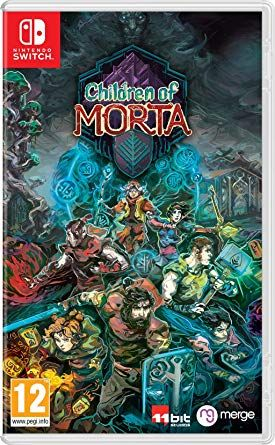 Looks like a great rouge like game. Not a massive dicount but still £4 Cheaper than physical copies. Reviews are promising, it's my kind of game so I thought I'd share. Only released on 20th of November

Children of Morta sets its story in a distant land but copes with themes closer to our daily lives that one would expect. It is a story of simple emotions we all know so well and value more than sometimes we dare to admit: love and hope, longing and uncertainty, ultimately loss and sacrifice we are willing to make to save the ones we care the most for.

Embark on the adventure of an extraordinary family of heroes. With the Corruption spreading through the land, guardians of the Mountain Morta have to stand up against the ancient evil. But... it's not a story about saving the universe. It’s a story about a valiant family standing together while the world around them is being devoured by darkness.

FEATURES:
rogue-lite with a strong storyline
6 playable characters
emotional tale focused on a family of heroes
a diverse set of skills
passive and active items modifying each run
multiple dungeons set in different biomes
a rich world full of history and magic
PostTweetShare Share with WhatsApp Share with Messenger
Community Updates
Nintendo Shop DealsNintendo Shop discount code
If you click through or buy using any of our links, retailers may pay hotukdeals some money, but this never affects which deals get posted. Find more info in our FAQs and About Us page.
New Comment Subscribe Save for later
12 Comments
30th Nov 2019
I thought £19.79 was the launch price on digital? I paid £21 for the physical version.

Found it cheapest at that at the moment. Not sure what it launched at. Where did you swipe the physical for £21, please?
30th Nov 2019

It may not be a deal but it is the lowest price I could find for a game I am interested in. I have not been keeping an eye on the price since day 1. If you can provide a link to where I can find this cheaper, I'd appreciate it.
1st Dec 2019
£17.38 on the Polish store. The UK is actually one of the most expensive regions.

Thanks for the link to the standard price for digital and comparing the price to the more expensive physical version....
Edited by: "Just.Wondering" 1st Dec 2019
1st Dec 2019
Would rather pay the £23.85 on Base for physical just for re-sale but nice deal if you are rich.