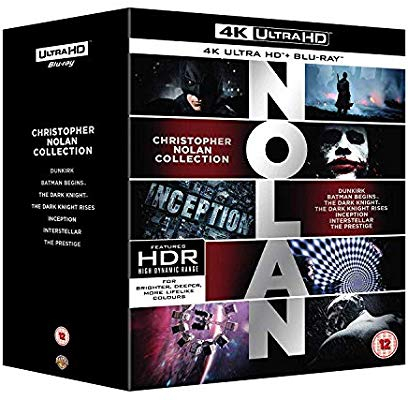 I know this was 54 pound in December but still a great price now if anyone missed out for all these films together in 4k down to 60 pound cant go wrong when some are 20 on there own.


DUNKIRK; Dunkirk opens as hundreds of thousands of British and Allied troops asre surrounded by enemy forces. Trapped on the beach with their backs to the sea, they face an impossible situation as the enemy closes in. (106 Mins) BATMAN BEGINS; After travelling the world seeking the means to fight injustice, Bruce Wayne returns to Gotham City and unleashes his alter ego, Batman, who uses strength, intellect and high-tech weaponry to fight evil. (140 Mins) THE DARK KNIGHT; Batman continues his war on crime with the help of Lt. Jim Gordon and Harvey Dent as rising criminal mastermind The Joker unleashes anarchy, forcing Batman closer to crossing the line between hero and vigilante. (153 Mins) THE DARK KNIGHT RISES; Eight years after Batman vanished into the night as a fugitive, things change with the arrival of a cunning cat burglar and the emergence of Bane, a ruthless terrorist who drives Bruce Wayne out of exile. (165 Mins) INCEPTION; Fugitive Dom Cobb is the best there is at extraction: stealing secrets from a dreamer's mind. Now he has a chance at inception - planting an idea into the subconscious - and success may mean his ticket home. (148 Mins.) INTERSTELLAR; A team of explorers travel beyond this galaxy through a newly discovered wormhole to learn whether mankind has a future among the stars. (168 Mins) THE PRESTIGE; Two young, passionate magicians are partners until one fateful night, when a trick goes horribly wrong. Now the bitterest of enemies, they will stop at nothing, including sabotage, to learn each other's secrets. (132 Mins.) SPECIAL FEATURES; Includes Special Features on 7 Blu-ray Bonus Discs.
PostTweetShare Share with WhatsApp Share with Messenger
Community Updates
Amazon DealsAmazon discount code
New Comment Subscribe Save for later
7 Comments
4th Feb
i got this same price in HMV so worth checking in store if you don't have Amazon prime

well worth it for this price its 21 disks ‌ ‌
Edited by: "kobrakaan1" 4th Feb
4th Feb
I've been trying to avoid buying this for so long.....
4th Feb
Got this for Christmas, at this price it’s a no brainier
4th Feb
FYI, this UK release is one box with all discs in rather than separate boxes per film. For the pragmatic possibly even convenient but is the reason I keep narrowly refrain from buying.
5th Feb
87.99 now
5th Feb

Yeah I bought them separately for not much more. Well Dark Knight was a trilogy but individual cases.