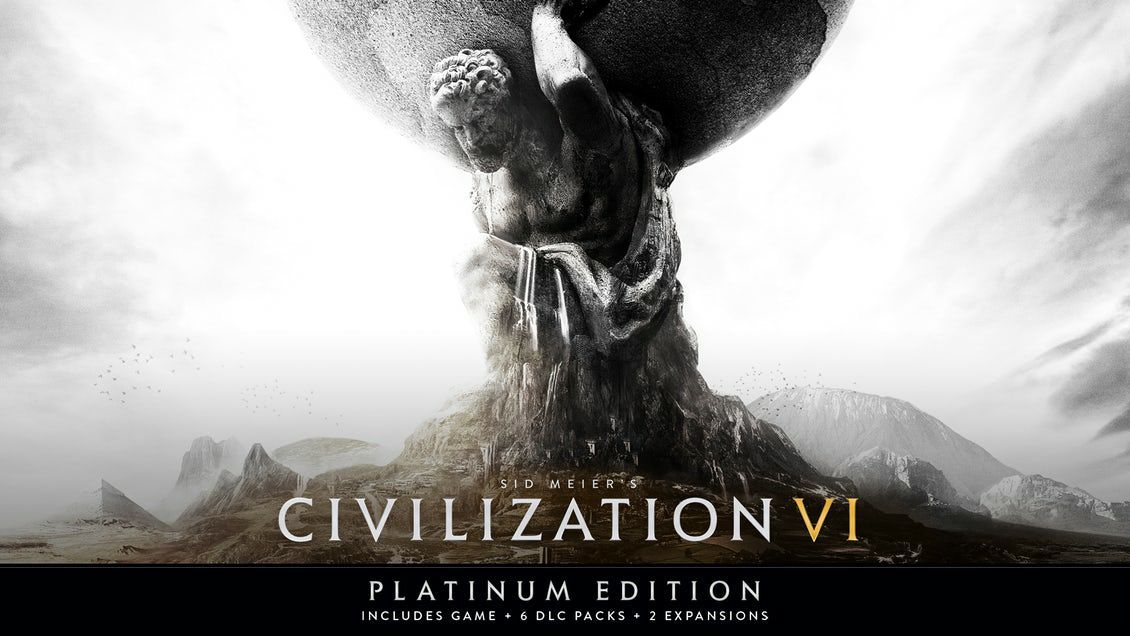 (PC) Civilisation VI - Platinum Edition - Main Game plus all dlc and expansions £22.99 for Steam on MacGameStore

Thanks to @pelwl there's actually a better deal so updating this to reflect that.

This is a mac store but you get steam keys so they will work on pc also.

About this game
Head into turn-based strategy and attempt to build an empire to stand the test of time with Sid Meier's Civilization VI Platinum Edition. With this Steam key, you'll explore a new land, research technology, conquer your enemies, and go head-to-head with history’s most renowned leaders as you attempt to build the greatest civilization the world has ever known. Plus, this edition also includes six DLC packs and two expansions!

EXPANSIVE EMPIRES
See the marvels of your empire spread across the map like never before. Each city spans multiple tiles so you can custom build your cities to take full advantage of the local terrain.

ACTIVE RESEARCH
Unlock boosts that speed your civilization’s progress through history. To advance more quickly, use your units to actively explore, develop your environment, and discover new cultures.

DYNAMIC DIPLOMACY
Interactions with other civilizations change over the course of the game, from primitive first interactions where conflict is a fact of life, to late game alliances and negotiations.

GREAT AGES
As your civilization ebbs and flows, and you reach milestone Historic Moments, you will move towards Dark Ages or Golden Ages, each providing specific challenges or bonuses based on your actions in-game. Rise triumphantly from a Dark Age, and your next Golden Age will be even stronger – a Heroic Age.

LOYALTY
Cities now have individual Loyalty to your leadership – let it fall too low, and face the consequences of low yields, revolts, and the potential to lose your city if it declares its own independence. But one civilization’s loss can be your gain as you inspire Loyalty among cities throughout the map and further expand your borders.

COMBINED ARMS
Expanding on the “one unit per tile” design, support units can now be embedded with other units, like anti-tank support with infantry, or a warrior with settlers. Similar units can also be combined to form powerful “Corps” units.

EMERGENCIES
When a civilization grows too powerful, other civilizations can join a pact against the threatening civilization, and earn rewards, or penalties, when the Emergency ends.

TIMELINE
Review your civilization’s history at any time with the new Timeline feature, a visual journey through the Historic Moments that you encountered on your path to victory.

ENVIRONMENTAL EFFECTS
Volcanoes, storms (blizzards, sandstorms, tornados, hurricanes), climate change, floods, and droughts bring the world to life in a brand-new way. Your settlement choices are more important than ever as you balance high risks and high rewards.

POWER AND CONSUMABLE RESOURCES
Strategic resources play an additional role. These resources are now consumed in power plants to generate electricity for your cities. Initially you’ll be powering your most advanced buildings by burning carbon-based resources like Coal and Oil, but renewable energy sources also unlock as you progress to current-day technologies. Your choices about resource usage will directly affect the world’s temperature and can cause melting ice caps and rising sea levels.

ENGINEERING PROJECTS
Shape the world around your empire to overcome unfavorable land conditions by making improvements like canals, dams, tunnels and railroads. When settling cities, consider the flood risk to coastal lowland areas, but keep in mind that in the late-game, new technologies like Flood Barriers can be used to protect these tiles.

WORLD CONGRESS
Make your voice heard among the other leaders of the world. Earn Diplomatic Favor through Alliances, influencing city-states, competing in World Games, and more. Use Diplomatic Favor to extract promises from other leaders, vote on Resolutions, call a Special Session to address an emergency, and increase the weight of your votes in your quest to achieve the new Diplomatic Victory.

21st CENTURY TECHNOLOGIES & CIVICS
A new era has been added to the Technology and Civics trees. Combat new environmental effects with speculative ideas such as relocating your population out to seasteads and developing technologies to recapture carbon emissions.

ENHANCED MULTIPLAYER
In addition to traditional multiplayer modes, cooperate and compete with your friends in a wide variety of situations all designed to be easily completed in a single session.
PostTweetShare Share with WhatsApp Share with Messenger
Community Updates
Mac Game Store Deals
New Comment Subscribe Save for later
25 Comments
28th Jan
You can get it for £23 at MacGameStore for the next 3 days. (They provide Steam keys which also work on Windows PCs.)

Bought it a couple of days ago and really enjoying it, having given up on the base game soon after release.
28th Jan

I updated it to reflect your deal, should be live now
28th Jan
It might actually be cheaper on DLGamer at the moment. They're charging $27.98, which is around £21.50, depending on currency charges.

Haha not editing it again

Interesting to know you tried it at launch and didn't like it, I was the same, loved 5 but couldn't get into 6 so maybe I should give it another chance now
28th Jan
I've only played about 10 hours so far, so might change my mind, but it's looking good. A fair bit more complex than 5 I would say, with much improved diplomacy/world congress stuff among other things, although the AI is as bad as 4X games always are.

Also, there's a lot more mods about now so things I didn't like, such as the lower movement speed on 6 compared to 5, I've modded.
28th Jan

Oh god is the ai still stupid? Japan set up next to me then told me off for settling next to them and then declared war in civ5 lol
28th Jan
Oh yeah I remember civ5 doing that all the time. Haven't had anything like that in the new one. I was talking more about AI combat not being too smart, but I can live with that. The actual AI diplomatic behaviour seems much better from what I've seen so far.
28th Jan
I have the main game already but this is still quite tempting to get all the DLC, I don’t think I’ve seen the expansions quite so cheap together.
28th Jan

I think the MacGameStore charges in dollars as well. I got a banner asking if I wanted to change to GBP but stating all charges were in dollars, so that would make DLGamer the better choice.
Do not change DLGamer to GBP though, the price comes out at over £28.
29th Jan
Steam happened to be advertising this on it's top banner for me last night when I opened it - I have to admit, I had to laugh at them asking £102 (reduced!) for it
29th Jan

Yea i saw that today.. Tbh I've not had it on my radar so didn't know what it was going for lately but searching on Google it's generally between 25-35 so 102 is funny
29th Jan

It says it's not able to be bought in the uk on DLGamer but can be redeemed in the uk. What the hell?
29th Jan

Sounds like you need a vpn lol
29th Jan

Any ones that you'd suggest?
29th Jan

Any ones that you'd suggest?

On mobile I used windscribe

It also asks to make an account too in order to buy. Do I just make a false account or what?
29th Jan

Alternatively you could try buying it from All You Play for £19.37 with code: ALLYOUCANPLAY
I've been slightly hesitant to post it as the address references Gold Edition though that also seems to be the case at 2Game.

Gold is redundant now so I suspect they've simply updated the original product pages, you'd have blatant grounds for a refund if there's any issue.
30th Jan

Thanks for this. I just bought the platinum version (they updated the name overnight?) for £19.36!
30th Jan

It's a great price, enjoy! I've got the base game and Gathering Storm, hoping Steam will eventually provide a decent package discount for the remaining Civs and Wonders
30th Jan

Tbh 19 is probably worth it for the rest anyway then give away the bits you already own.
30th Jan

Gathering Storm makes Rise & Fall obsolete so it really is just more Civs to choose from. At most I'd pay a fiver to complete the content. Don't think it's possible to gift the duplicates either.
30th Jan

I assumed you'd get a code for each piece of content, my bad.

Why does one make the other obsolete?
30th Jan

The Gathering Storm expansion includes all the rules / features from Rise & Fall.
19th Feb
Anyone got any curent offers for this on the PC?