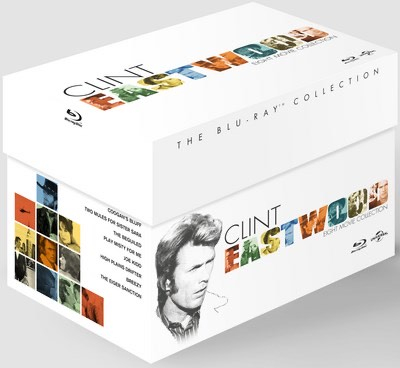 Also available on the main Zoom site if you prefer (states out of stock on main site but you can still order).

In ‘Play Misty for Me’ (1971) Dave Garland (Clint Eastwood) is a Californian DJ who runs a late night call-in show, and receives regular requests from a female caller for Erroll Garner’s ‘Misty’. The fan, Evelyn Draper (Jessica Walter), turns out to be a maniacal stalker.

In the western ‘High Plains Drifter’ (1973) the unwelcome arrival of a stranger (Eastwood) in the town of Lagos causes resentment and fear among the locals. However, when they come under threat from a band of escaped convicts, it is to the stranger that the townsfolk turn for salvation.

In ‘The Beguiled’ (1970), during the American Civil War, a wounded Union soldier (Eastwood) is taken in by the all-female staff of a Confederate Louisiana girls’ school as their ‘prize’. However, the soldier cunningly plays the women off against each other, working on their sexual frustrations and biding his time until he can make an escape.

‘Breezy’ (1973) is an Eastwood-directed effort in which Breezy (Kay Lenz) is a teenage hippy hitchhiker taken advantage of by a ruthless rotter who wants to use her for sex. She escapes in a remote area and meets kindly middle-aged man Frank Harmon (William Holden) whom she hopes will take her in. Harmon is (rightfully) reluctant and his worst imaginable scenario comes true when the impressionable teen falls in love with him.

In ‘Two Mules for Sister Sarah’ (1969) a gold-digger (Eastwood) in old Mexico shows his fundamentally noble nature by saving a ‘nun’ (Shirley Maclaine) from being raped. She turns out in fact to be a prostitute, and the odd couple team up, facing continual confrontation with the French forces.

In ‘Coogan’s Bluff’ (1968) Eastwood is Arizona deputy Walt Coogan, sent to New York city to escort a prisoner home. The prisoner isn’t ready to be transferred back to Arizona so Coogan cuts a few corners. This helps the prisoner escape and, after Coogan clashes with the Sherrif McElroy (Lee J. Cobb), he is ordered back to Arizona.

See what you mean That would be a good one for the 'alternative' Opticians Eye Chart
Edited by: "pekoz1" 28th Feb
28th Feb

yep - saw excactly that :O
28th Feb
“Do ya' feel lucky, punk?”
28th Feb
Terrible selection out of all his greats, guessing this is down to production compainies
28th Feb
DVDs, in 2020? Surely streaming would be cheaper, easier and cuts out item delivery
28th Feb

I guess it's ok for the completist. A couple of those films are average at best.
28th Feb

People still calling blurays "dvds" in 2020?
Yes please go and try and find these 8 movies on a streaming service. I bet you cant. You might not even find them or they are split over a few. It's not cheaper or easier then.
28th Feb

Of course. There are a few Clint collections out there. This is the Universal collection. The Warner collection is bigger and much better. But for £1.50 per bluray (and they come in standard size bluray cases) it's a deal.
28th Feb
Ok I've had a look.

Amount of films on Netflix - 0
Amount of films included on Prime - 0
You can buy all 8 through Amazon video however or rent them. Enough said!
Edited by: "stingersplash" 28th Feb
28th Feb

Came here to say just that, I spent about 10 minutes howling in the office!
28th Feb

Came here to say just that, I spent about 10 minutes howling in the office!

To be fair, I think he is a *expletive* in most of his roles. A likeable *expletetive*, mind, but a *expletetive* all the same
28th Feb

I bet you can find them online, some arent even worth watching and your paying for someone to deliver them to your house, all seems a little excessive for outdated media. Stand by my first comment 100%. Its 2020, why would you buy a DVD?
28th Feb

qBitTorrent with Search plugin is your friend.
28th Feb
Heat for the Vet, that is Clint.....but not his finest collectibles
28th Feb
No Dollars Trilogy? No Dirty Harry? No Unforgiven? No Gran Torino? What is this madness!!
To be fair if they added those this bundle won't be £12 RN it would hold its value well, at least double
Edited by: "Norseg" 28th Feb
28th Feb

This is films that arent in the other Big CLINT box set ,the one thats black with it written in yellow on the side , that has all them and many more, someone mentioned above something about Universal and Warner studios , so this compliments the other set nicely if you have that
28th Feb

'I thought I saw your name on a loaf of bread, but then I realised it said Think Cut' 😏
28th Feb

Someone said it would be cheaper to stream. I simply showed it isn't.
28th Feb

Firstly its free delivery. Secondly theft isn't a thing I condone. Third unless you have actually watched all 8 you don't really have an input and even if you did we all have different tastes.
Finally people buy DVDs/Bluray/4K in 2020 because they want to own a movie to watch at their leisure. With best picture and audio (streaming isn't there), watch special features...all sorts of reasons.
Bluray isn't outdated media either. It's not a videotape!
28th Feb

Yeah but Clint Eastwood lol, theyre his best films, they all work.together and add his movies when he dies even with the whole different studio things it's the least they can do, man its sad because him and Morgan Freeman are lucky to be alive since theyre living past life expectancy

you dont understand. disks are too much effort, the carbon footprint is huge, stop buying them and they'll stop making them
29th Feb

Too much effort? How lazy is that?
I won't stop buying and if we ever get to the awful day physical media goes away for good, I'm done buying movies. I'd have enough to last the rest of my life anyway.
29th Feb

Some people collect, and prefer to see the films sitting in rows on shelfs.......much like a library.
I fit into that category, not knocking others though...each to their own!
Although I do own a 8tb hard drive which also contains quite a few films, but if I really like a film
I buy a disc copy... and I still own a few VHS tapes maybe 6 or 7 of my absolute favourites i.e.
The Crow, Lost Boys and Legend etc etc...
Edited by: "JOHNNY_WILKINSON" 29th Feb
29th Feb

No, just you and everyone else who's cracked that joke every time it's been listed..
Edited by: "marblestingray" 29th Feb
29th Feb

It might be outdated, but some areas of the country are outdated too.....until December last year, I couldn't get broadband fast enough for streaming where I live, and 4G coverage (only available from EE) wasn't cost effective, so streaming literally wasn't an option - there are still plenty of areas in the UK in the same boat (pretty much anywhere at a reasonable distance from the nearest cabinet with underground copper cabling can be in this situation).
29th Feb

Sorry to hear it, Im sure once you do get better bandwidth you wont want the extra clutter that is DVDs and such lying around the house anymore
29th Feb

Very much understandable if you have the space and get enjoyment out of it. IMHO the cons of this bundle deal far outweigh the positives, some of these films just arent very good.
29th Feb

I now have FTTP, but I won't be offloading my DVD's/Blurays anytime soon as I'd need to subscribe to multiple streaming services to be able to access them all, and I'm not that short of space (I personally keep them all in their cases but there's no reason you can't ditch the cases and just store the discs in bulk storage wallets, slip cases etc. if you live in a shoebox or don't want them on display).

Back to the posted deal though - I agree these films aren't exactly his finest work, more the sort of thing you used to get bundled free with a dvd player!
Edited by: "Aliwoo18" 1st Mar
2nd Mar

Always one isn't there..