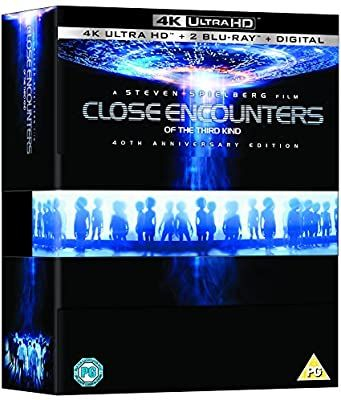 Packaging with Light and Sound
Experience a Close Encounter like never before with limited edition packaging that lights up when opened and plays the iconic theme from the film! For more details, watch the 'unboxing' video located under the pack shots at the top of this page.

Description
Product Description
Celebrate the 40th anniversary of Steven Spielberg’s sci-fi blockbuster, now fully restored in 4K. Richard Dreyfuss stars as cable worker Roy Neary, who experiences a close encounter of the first kind - witnessing UFOs soaring across the sky. Meanwhile, government agents have close encounters of the second kind - discovering physical evidence of extraterrestrial visitors in the form of a lost fighter aircraft from World War II and a stranded military ship that disappeared decades earlier only to suddenly reappear in an unusual place. Roy and the agents follow the clues that have drawn them to reach a site where they will have a close encounter of the third kind - contact.

All-new interviews with directors Steven Spielberg, J.J. Abrams and Denis Villeneuve reflecting on the legacy and impact of this iconic sci-fi classic.

Took me a while to notice it too! Ciao!