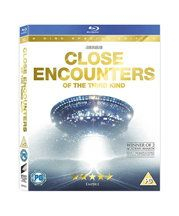 CLOSE ENCOUNTERS OF THE THIRD KIND is an extraordinary film about a man named Roy Neary who becomes obsessed with meeting extraterrestrials after encountering a UFO on an abandoned road one night. Against the wishes of his wife and children Neary along with another witness to the sighting travels to a mysterious mountain where the government has built a landing strip hoping to attract the aliens.
Features

Why has it 'been expired' please?

Out of stock now