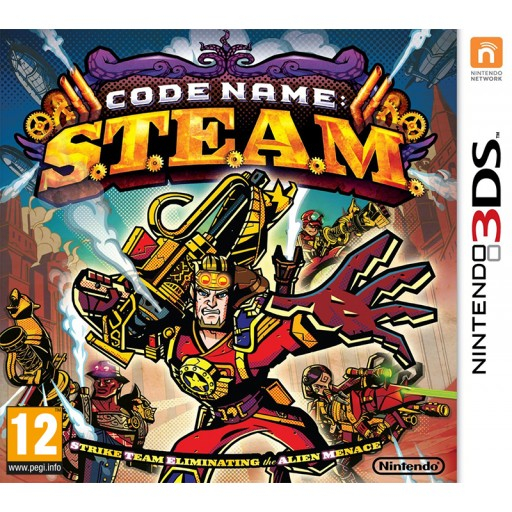 Code Name: S.T.E.A.M.The player selects four members from a team of agents, each with their own unique personalities – led by the 16th President of the United States of America, Abraham Lincoln – to fight back against aliens invading the planet.

While the combat is turn-based, it takes place with a third-person view, giving this strategy game the immersive feel of a third-person shooter. Online multiplayer and matches against other players add to the fun.

About the gameThe aliens that you face are legion, remorseless, and terrifying. You'll need more than a fancy boiler and steam weapons to accomplish your goals: you'll need a solid plan and a thoughtful, tactical mind.

Some missions will throw you together with other agents, but once you build a deep enough roster you'll be able to pick your own team. Examine each agent's unique skills and strengths, then create groups that suit your mission objectives.

For each battle, agents will start at set locations. As you move around the environment, look for objects that hide you from alien sight lines and for rewards like medals and gear. Scout for routes that will keep your team safe and meet your mission objectives. The best path may not be the most obvious path.

Epic battlesBattles offer checkpoints where you can save your progress. You can also replenish steam reserves, restore health for an agent or the team, or even revive a fallen team member, but those services will cost you medals.

These otherworldly creatures come in many different forms, and deliver a great variety of attacks. They also display a wide range of mobility and toughness. Get to know their patterns, and adjust your tactics accordingly.

Save your steamIt's important to take out the enemy when possible, but sometimes your best option is to end your turn with steam held in reserve, so you can ambush aliens with Overwatch attacks as they approach.

As much as you'd like to stand and fight, sometimes you need to stay on mission and make a run for the goal on the battlefield. You may also need to sacrifice a comrade or two to reach the finish line.
PostTweetShare Share with WhatsApp Share with Messenger
Community Updates
The Game Collection DealsThe Game Collection promo code
New Comment Subscribe Save for later
4 Comments
29th Jan
Steam punk Lincoln anyone?
30th Jan
This game is so worth the price! Probably done a whole lot better however if only it had a better name. Wish they would create a S.T.E.A.M 2 but that will probably never happen
30th Jan
Ordered 🔥
30th Jan
I didn't like it, but at this price you can't go wrong