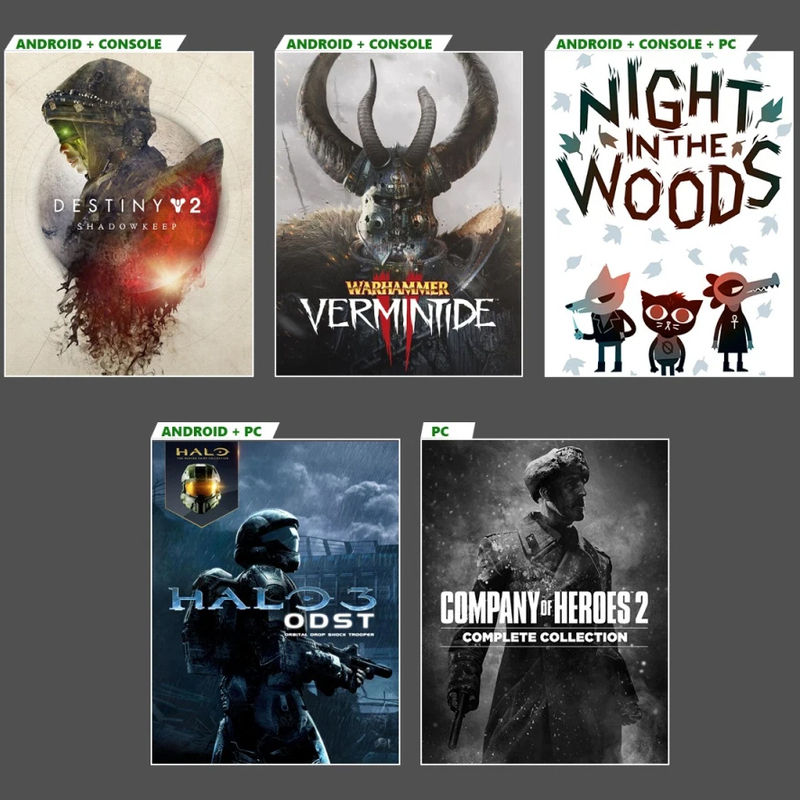 Company of Heroes 2 (PC) – September 17
The follow-up to the highest rated RTS of all time, Company of Heroes 2 is an acclaimed blend of strategy and tactics will test players’ knowledge of real-world combat. Now with five armies included to play with in multiplayer and two single-player campaigns. Cover, line of sight, armor, and fully destructible environments all must be considered to lead your troops to victory

Destiny 2: Shadowkeep & Forsaken (Android & Console) – September 22
Dive into the world of Destiny 2 to experience responsive first-person shooter combat filled with stylish finishers and devastating Super abilities. Create your Guardian and explore the mysteries of the solar system while collecting powerful gear to customize your look and playstyle. Brave challenging co-op missions, compete with other Guardians in a variety of PvP modes, and experience a cinematic sci-fi story throughout both the Forsaken and Shadowkeep expansions. You decide your legend.

Halo 3: ODST (Android & PC) – September 22
Play as an Orbital Drop Shock Trooper (ODST) and explore the war-ravaged streets of New Mombasa as you attempt to piece together the Covenant’s motivations for invading the city. As an ODST, you don’t have the firepower or the overshields to go head-to-head with Elites, Brutes, and Hunters – so use stealth and hit-and-run tactics to eliminate threats and sneak behind enemy lines.

That’s not all though, as ODST Firefight is joining The Master Chief Collection on console and PC for the first time, with online matchmaking, dedicated servers, and new custom game modes! Grab some friends and hop into the fan-favorite mode as you take out wave after wave of Covenant invaders across 10 legacy maps.

Night in the Woods (Android, Console, PC) ID@Xbox – September 24
Join college dropout Mae Borowski as she returns home to the crumbling former mining town of Possum Springs, seeking to resume her aimless former life and reconnect with the friends she left behind. But things aren’t the same. Home seems different now and her friends have grown and changed. Leaves are falling and the wind is growing colder. Strange things are happening as the light fades.

Leaving on the 30th September

Hope it helps someone.
PostTweetShare Share with WhatsApp Share with Messenger
Community Updates
15th Sep
For those on android attempting to use the cloud gaming feature on the game pass app, use the game pass beta app, as the update for cloud gaming is still being rolled out across many devices, however you may have certain problems such as the game not fitting the entire screen.

dishonoured 2 is incredible, everyone needs to play it, some of the best level design in any game
14th Sep
Wanted to play 'night in the woods' since launch sweet
14th Sep
At this point I feel like Xbox are trying to sleep with me.

Some flowers and chocolates would have been fine too, Xbox...
148 Comments
14th Sep
How is this a deal?
14th Sep
Halo 3 ODST on PC yes pleaseee
14th Sep
Wanted to play 'night in the woods' since launch sweet
14th Sep

‌ ‌
14th Sep
Thanks for putting what’s leaving too,

dishonoured 2 is incredible, everyone needs to play it, some of the best level design in any game
14th Sep
That warhammer game was on gamepass before, its a pretty good mele left 4 dead clone
14th Sep
At this point I feel like Xbox are trying to sleep with me.

Some flowers and chocolates would have been fine too, Xbox...
14th Sep
Thanks for posting, just hoping the android part of game pass is a smooth experience for me.
14th Sep
Night in the woods is an excellent game
14th Sep
Can vouch for Night in the Woods. Great game
14th Sep

I wish someone would!
14th Sep

Did you not read the title? Cloud game streaming is being added at no extra cost.
Edited by: "shasnir" 14th Sep
14th Sep

I would assume those who would be interested in the game additions would own an Xbox/Game Pass. When you boot up your Xbox, it tells you what new games are added when they are added.
14th Sep

What's your take on playstation plus and Xbox live announcement posts?

Do you vote cold on those or you support someone posting them?
Edited by: "kos1c" 14th Sep
14th Sep
Nothing here for me thankfully as I am already trying to finish multiple game pass games. Heat mate
14th Sep

My xbox just broke, this will keep me ticking over until I source a replacement.

Wasn't going to upgrade to the newer console yet
14th Sep
Rubbish month for me, rather keep the leaving set and have none of those. Last set seemed a lot better TBH.

Wish they would start doing 30 days notice of things leaving too, not really enough time if you haven't started them e.g. I'd have liked to do Dishonored 2 but I doubt it's a short playthrough so don't fancy my chances of finishing it before it goes
14th Sep

Exactly, announcements becoming "deals" all to often on HUKD lately.
14th Sep
At this point I actually feel sorry for Sony. Going forward they need something like super cheap PSVR.
14th Sep

I'm positive by now your village wants its idiot back..
14th Sep
Company of Heroes 2 was a great game and had so much potential, sadly when they moved it to Steam it completely ruined the game, I haven't played it since (2014). Is it worth pointing out that it's a 7 year old game?
14th Sep

Years ago I used to support them, I've even posted game releases myself in the past but I think there should be a separate section for these noe as there's way too many now.
14th Sep

I wish someone would!

As well as Amazon Prime video, Disney +, Apple TV as well as terrestrial TV? If someone did then this site would be spammed with even more 'release' information.
14th Sep

Too much work to add a dedicated section. As it's only a handful of posts a month (1x ps+ 1x Xbox live, 1x game pass, and if you add Netflix / Disney + etc). Doesn't really balance out the need. Probably easier just scrolling past the posts you don't need.
14th Sep

Exactly, announcements becoming "deals" all to often on HUKD lately.

Who cares, just scroll past them if you're not bothered.

There are millions of crap deals on here for things at Poundland, socks, cat food, 5p off tins of tuna at supermarkets etc etc. I have no interest in them so just keep scrolling, what I don't do is waste my precious time going into the thread for these crap things and point out what's wrong with it, or that it's not a "deal".
14th Sep

Exactly, announcements becoming "deals" all to often on HUKD lately.

I was playing Forza on my s8 the other night no issues, the quality I feel could be better though... but still amazing
14th Sep

Thought it comes out the 15th?

Think I got the Beta version, it's in the store, just search Xbox Game Pass and it's the white one. Then click on what game you want and it'll load up

Will give it ago.
My window store on pc won't allow me to install the Xbox app, so been working on fixing window update errors. As their linked.

But will get on the app, it comes out officially tomorrow as well

What internet up and down speeds you got? As curious if mine will be good
14th Sep

It doesn't seem to work for me. It'll load a game and then I'm stuck on loading screen while the rest of the game runs in the background.

I'm 69mbs down and 10 up. But even on my 4g+ it just loads the background of the game (noise) and sits on the loading screen.

You closed all the stuff in the background of your phone? What kind of phone is it? Mines about 4 years old now so pretty poop compared to other smart phones
14th Sep

Destiny 2 and all dlc? does anyone know?

Finally got Forza to run, but the car is so heavy to turn. But seems lag wasn't an issue. But that was on my 4g+ as WiFi here is a bit crap. Waiting on my upgraded router from sky.

P30 pro, so isn't the phone. Was just bad connection.