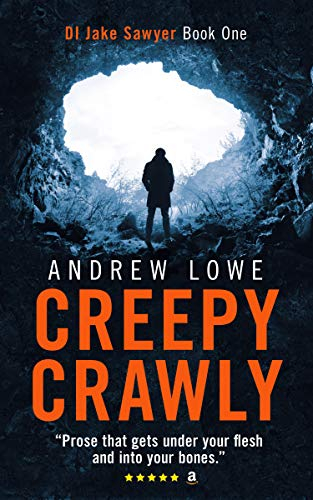 "Just because you don't feel fear, it doesn't mean you shouldn't be afraid."

Now he’s quit the capital and returned to his home town in England’s Peak District, to investigate the savage murder of his mother, thirty years earlier.

When the body of a teenage boy is found in a shallow grave, close to woodland where Sawyer used to play as a child, he’s called in to help decode the killer’s nightmarish methods.

But as the victims stack up and the case takes an unexpected turn, Sawyer must risk his own life to hunt the hunter and save an innocent.

CREEPY CRAWLY is the first book in the DI Jake Sawyer series of dark crime thrillers set in the UK Peak District.

If you like vivid characters, spectacular locations and devilish twists, you'll love this page-turning series from one of the UK's sharpest writers.

Thank You Yes Business As Usual
19th Mar
Cheers Boz! My books are going down as I self isolate, so more the merrier. Keep safe. 😷
19th Mar

Many Thanks Hope You Stay Safe As Well x
19th Mar
Thanks Boz good to see you
19th Mar
Your a life saver got to self isolated need these ‌ ‌ ‌
19th Mar
Thanks very much Boz! Been doing quite a lot of reading lately & this looks like another great find. Just added to my library. Stay safe!
19th Mar
Thanks Boz
20th Mar
cheers and heat as always
20th Mar