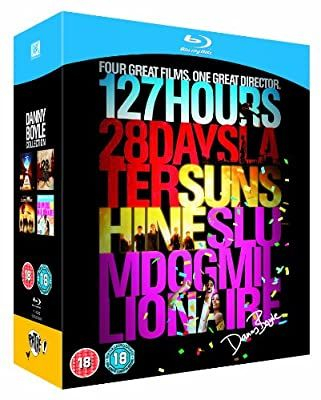 £4.89£7.4935%Music Magpie Deals
4
Get dealGet deal
4Get dealGet deal
Posted 30th Dec 2019
127 Hours
A triumphant true story from Danny Boyle, director of Slumdog Millionaire. The incredible true story of mountain climber Aron Ralston's (James Franco) remarkable adventure to save himself after a falling boulder crashes on his arm and traps him in an isolated slot canyon in Utah. With only a day's worth of water, a blunt penknife and an unwavering will to survive Aron does everything he can go make it out alive.

Sunshine
It is the year 2057, the sun is dying and mankind faces extinction. Earth's last hope rests with a courageous crew of eight men and women on a mission to ignite the fading star with a massive nuclear weapon. Deep into their voyage, out of radio contact with Earth, their mission begins to unravel and they find themselves fighting, not only for their lives, but for the future of us all.

Slumdog Millionaire
Jamal Malik (Dev Patel), an 18-year-old orphan from the slums of Mumbai, is just one question away from winning a staggering 20 million Rupees on India's Who Wants to be a Millionaire? Arrested on suspicion of cheating, he tells the police the incredible story of his life on the streets, and of the girl he loved and lost. Mixing stunning scenery with breathtaking action, comedy and romance, this is the ultimate tale of rags to riches.

28 Days Later
A powerful virus is unleashed. Transmitted in a drop of blood and devastating within seconds, the virus locks those infected into a permanent state of murderous rage. Within 28 days the country is overwhelmed and a handful of survivors begin their attempts to salvage a future, little realising that the deadly virus is not the only thing that threatens them.
PostTweetShare Share with WhatsApp Share with Messenger
Community Updates
Music Magpie DealsMusic Magpie Discount Codes
If you click through or buy, retailers may pay hotukdeals some money, but this never affects which deals get posted. Find more info in our FAQs and About Us page.
New Comment Subscribe Save for later
4 Comments
30th Dec 2019
This is in hmv for £3.99 if you're near one.
30th Dec 2019
£4 used in CEX or plus £1.50 delivered if you don't mind preowned