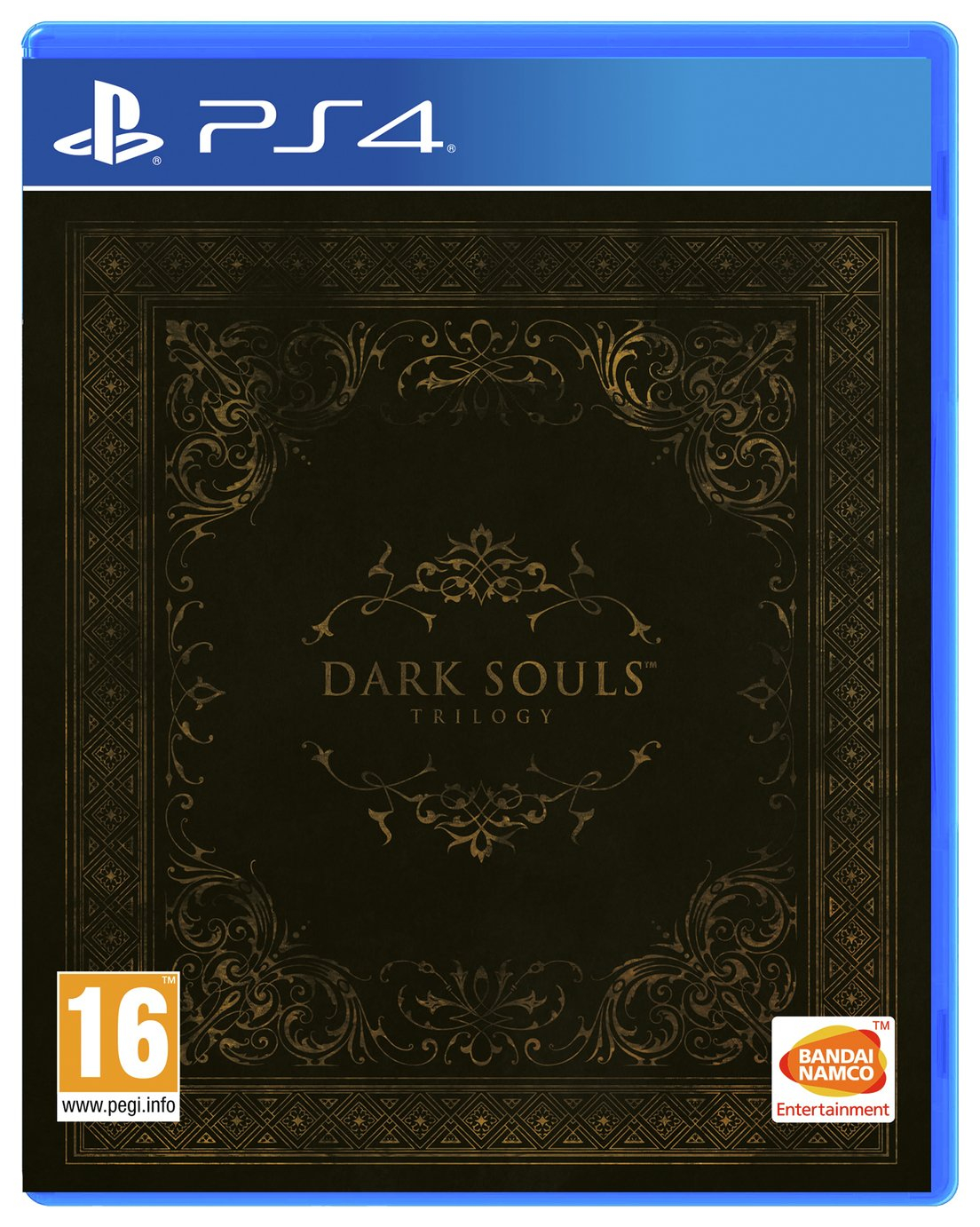 For the first time ever, own all three critically-acclaimed Dark Souls games and all associated DLC content in one 3-disc collection. Enter the epic dark fantasy universe stricken by decline and the Curse. Explore the intricate world designs and deeply rooted lore. Each play through surprises with new challenges and discoveries. 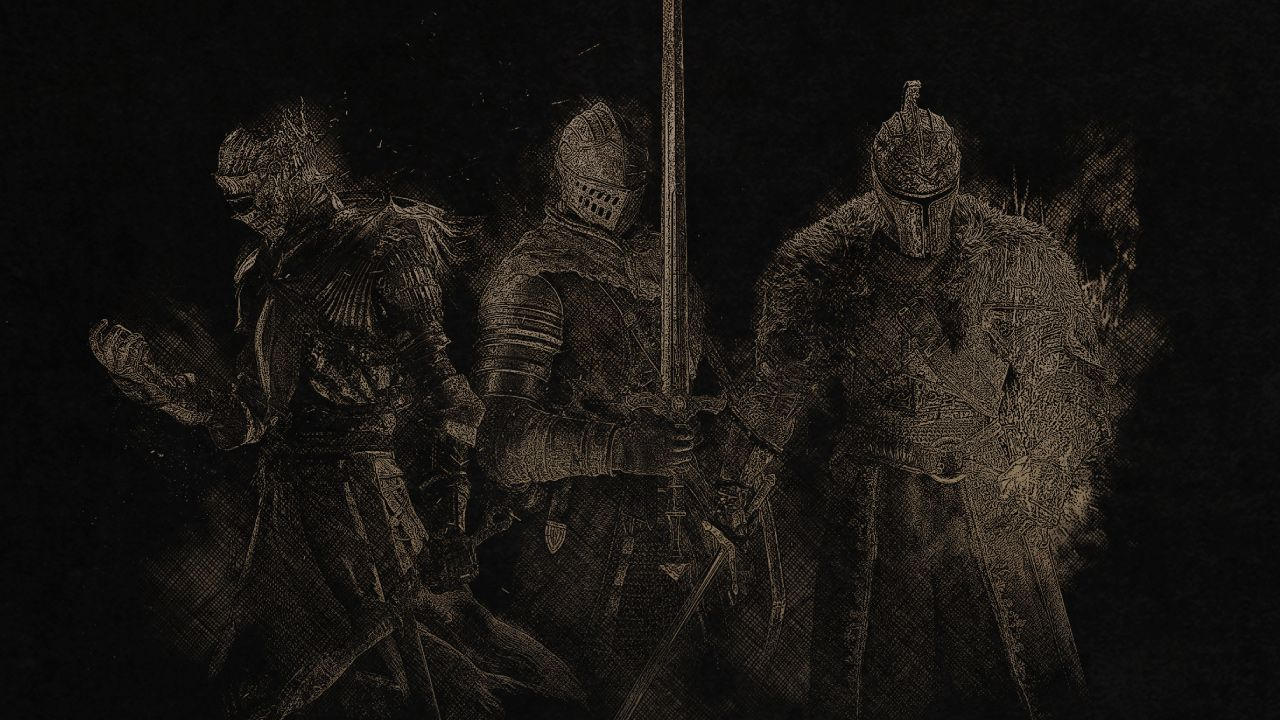 DARK SOULS REMASTERED - Then, there was fire. Re-experience the genre-defining game that started it all. Return to Lordran in the beautifully remastered game in high definition, 60 FPS with single-player or online multiplayer with dedicated servers. Includes the Artorias of the Abyss DLC.

DARK SOULS II: SCHOLAR OF THE FIRST SIN - Prepare to Die again. The second installment of the series includes the base Dark Souls II plus all three DLCs: Crown of the Sunken King, Crown of the Old Iron King, and Crown of the Ivory King.

DARK SOULS III: THE FIRE FADES - Now only embers remain. . . Dark Souls III is the final journey in the series where players can fight through intense combat solo or team up for in co-op or PvP multiplayer. Includes the award-winning game and both DLC chapters: Ashes of Ariandel and The Ringed City.
PostTweetShare Share with WhatsApp Share with Messenger
Community Updates
Argos DealsArgos discount code
If you click through or buy, retailers may pay hotukdeals some money, but this never affects which deals get posted. Find more info in our FAQs and About Us page.
New Comment Subscribe Save for later
Top comments
9th Aug 2019

Any ideas whether I should get for my Pro or my X?

How many DS4 and XO controllers do you have for each console?
39 Comments
9th Aug 2019
this has gone really quickly. really want this one.
9th Aug 2019

this has gone really quickly. really want this one.

Same here. I think it is being printed again as Shopto is on back-order. Hopefully fresh stock would hit the market soon.
9th Aug 2019
Any ideas whether I should get for my Pro or my X?
9th Aug 2019
I'm currently playing through DS Remastered for the first time. Loving the challenge.
I do feel these games are a little pretentious though and would sell better if there was just more "explanation" to things. I think I'm only actually enjoying the game because I'm following a guide. I hear some of this is kind of fixed in Sekiro so after DS1 is done I'll play 3 as I own that and then might go to Sekiro or Bloodborne (and finally finish it)
9th Aug 2019

Any ideas whether I should get for my Pro or my X?

How many DS4 and XO controllers do you have for each console?
9th Aug 2019

You should've started with Bloodborne and then watching the lore on VaatiVidya' Youtube channel at the same time and falling in love with Miyazaki' games. Then start the DS3 first and getting the hold of series and then DS1 and lastly DS2. After you've mastered the mechanics in DS, you need to play Sekiro only to find it totally different and getting p***ed ... coming back to that Youtube channel and watching Sekiro's lore and hearing the "I can do it" voice inside you and back to Sekiro for the platinum!
Edited by: "mixmixi" 9th Aug 2019
9th Aug 2019

I've played Bloodborne till around half way through but then got distracted and sold it, picked it up on PS+ but because I had goty edition I can't carry on my save. So need to either re-buy the dlc or just start fresh.

DS2 and 3 I've played around 5 or so hours and again got distracted with the backlog, this time I'm focusing on DS1 until I've finished it.
9th Aug 2019

If I remember correctly, I played BB when it went on plus and because I loved it only so much, I installed my GOTY and deleted the plus game after finishing it and the save file carried on. Have you tried to see it actually works because it did for me? Yeah, I get what you say... distraction with other games in between playing these games is toxic... You need to stick to them and finish them otherwise, starting over... I played the prologue part of the DS3 five or six times during a year until I heard the voice and finished the game.
9th Aug 2019

The problem is my save is a GOTY one and won't allow me to use it on base Bloodborne it said I need the DLC to load it, so my choice is pay £ or start fresh (which is likely the better option given how long it's been since I played it haha)
9th Aug 2019

How far did you go in the game? It is an amazing game, it is always pleasing to play through it!
9th Aug 2019

just under half I think.
I'd gotten to the Forbidden Woods I think and was about to take on the Shadow of Yharnam
9th Aug 2019

Then there is still a long way ahead! And Mergo's wet nurse, Ebrietas and Martyr Logarius are some of the bossess that require a bit of skill and practice, IMO. Best to start over! Have you done any of the chalice dungeons? The bosses over there are outrageous.
9th Aug 2019

Yeah I think I will at some point.
No never did chalice runs but I understand they can be very hard.
9th Aug 2019

There is an amygdala in one of the dungeons that cost me a controller... Just a heads up!
Edited by: "mixmixi" 9th Aug 2019
9th Aug 2019
I think the reason for lack of explanation is director's fond of Lovecraft's mythic novels: the scarest is the unknown things. I highly recommend blind playing fromsoft's games for the first time, especially bloodborne and the madman's wisdom system:)'
9th Aug 2019

the first time I saw an amygdala (not the boss) I was really doubting my eyes!
9th Aug 2019

I will forever have nightmares about that fight
9th Aug 2019

I will forever have nightmares about that fight 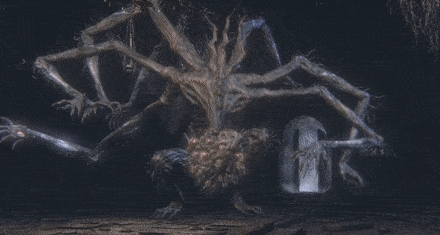 Good luck dude.
9th Aug 2019
I've had Bloodborne for a while but not played it yet. I'm getting the sense that it's quite hard. What difficulty would people recommend for a tough but not labotomising challenge? Just finished god of war on GMGOW difficulty, and fighting the Valkyrie queen for over two weeks almost finished me off!
10th Aug 2019

I don’t think there is a an actual difficulty setting on Bloodborne or the Dark Souls games. I may be wrong though.
10th Aug 2019

You’re right the only setting is git gud. As anyone who you say the game is hard to will tell you.
10th Aug 2019
You need to play each game a third of the way thru & then watch emmerdale farm ( for a laugh) then start each game again but this time blindfolded whilst skipping backwards. Hopefully you will realise you are then in a different dimension & either pretend to be the new dr who or go on a rampage trying to find biblical stylie virgins , male/female (not blindfolded....well that's your choice) as you're obviously trying to find the correct key to Borisland it's only then you realise it's all a waste of time & you should have just bought a decent steering wheel set as recommended by hot deals & played F1 2019 til nanny changes you. Bye
10th Aug 2019

Absolutely correct- no difficulty settings. Just practice I’m afraid. I loved Bloodborne- game of the generation for me. I’ll be picking up this trilogy too.
10th Aug 2019
Get to die in triplicate. Good games but time sucking monsters as well. Good price for all three.
10th Aug 2019
Typical of an Argos deal, both versions OOS everywhere around me.
But will keep checking just in case.
10th Aug 2019

I am in the same position. Had the GOTY edition on digital for a couple of years. I did start it and it's not as hard as Dark Souls, I.e you only die 3-4 times per monster! So for you I'd up the difficulty from normal
10th Aug 2019
Save yourself some money and just get a screensaver that says “you died” every fifteen seconds.
10th Aug 2019
Still stuck on Demon’s Souls ‌
10th Aug 2019
All souls games are great but Selkiro is a bit too punishing as you can’t summon help on the bosses,after being stuck on guardian ape for a while I gave up
10th Aug 2019

Seikiro is far easier, you just have to learn the boss patterns, I find Bournesouls are a bit more random. Guardian Ape is a prime example of offensive attack..
11th Aug 2019
for those who has same need beyond the Argos website store search, here is a website you can search by distance and even across all stores in the UK.
11th Aug 2019

checknow.co.uk/sea…php
11th Aug 2019
I want this but I've not even finished Bloodborne, can see they're great games but can't seem to get into them - probably to do with having to redo stuff to get back to where you were when you've died
11th Aug 2019

Sekiro is much more intuitive compared to souls but the concept is similar. Playstyle is different but still very enjoyable. Play through Sekiro first then Bloodborne DS3 is my favourite.
12th Aug 2019

Thanks for this, picking a copy up tomorrow, not too far away.