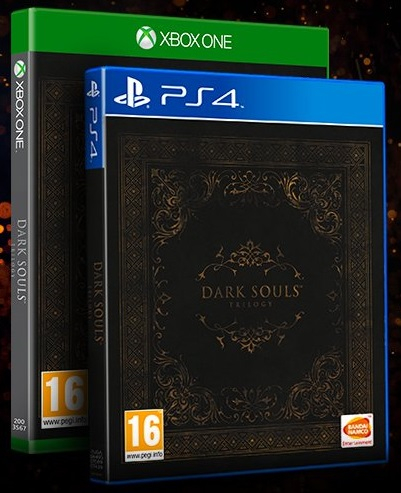 Pre-order, Due for release on 01 March 2019. Base takes money on dispatch. 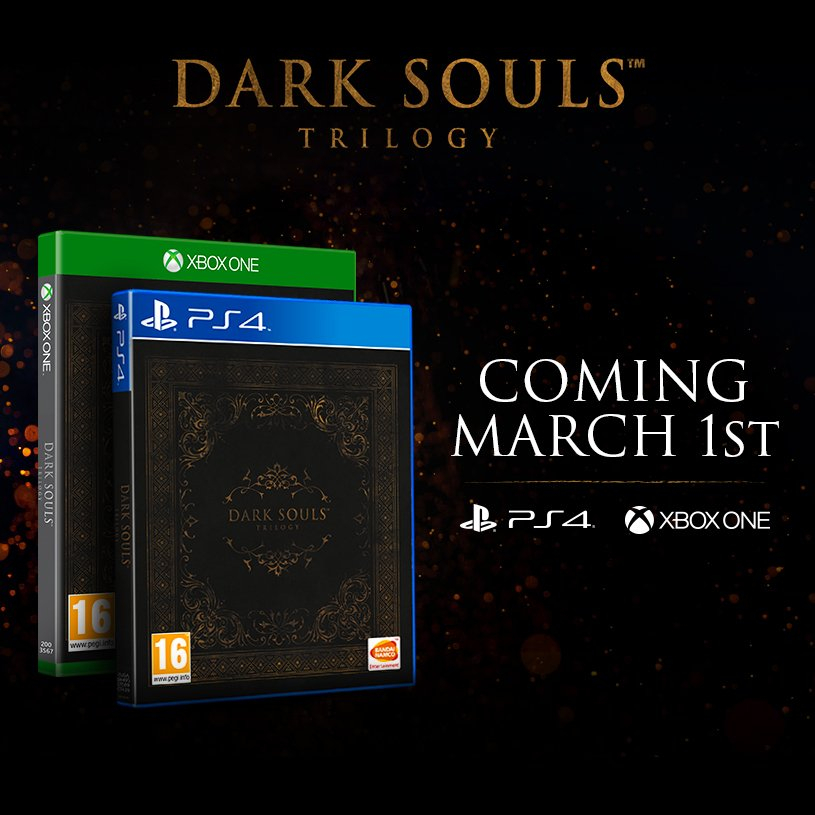 For the first time ever, own all three critically-acclaimed Dark Souls games and all associated DLC content in one 3-disc collection.

Enter the epic dark fantasy universe stricken by decline and the Curse. Explore the intricate world designs and deeply rooted lore. Each play through surprises with new challenges and discoveries. Play with hundreds of unique combinations of weaponry, armour, magic and crafting options to create your own play style, and gaming experience.

Has this actually been confirmed for an UK release now?

When did this get announced?

2 hours ago by the look of it.

Yeah there was an article yesterday on Eurogamer about it possibly appearing.
Bloody Bamco do this sort of thing, one minute saying it won't be coming, the next bing it appears (as if by magic).
11th Jan 2019
Was going to pick up the Souls games in the PSN sale literally yesterday so I might wait for this now.
11th Jan 2019

Is Dark Souls 2 being remastered?

Dark Souls 2: Scholar of the First Sin was kind of a remaster

Just bought dark souls remastered for £14 so only 2 missing now!

That's the price for DS2.
DS1 is £25.
11th Jan 2019
Actually a really decent price for 3 games, considering DS1 remastered alone retails for around £20, plus you get all DLC. What's not to love!
11th Jan 2019
I wish they could remaster putting different baddies in different places. I would buy it all again
11th Jan 2019
I honestly wouldn't bother with the trilogy. Get the Remastered and DS 3 separate! 2 is awful. i got Dark Souls 3 and Season Pass on the PSN store for £15. Really great game.
Edited by: "Adorablemunchkin" 11th Jan 2019
11th Jan 2019

Just bought dark souls remastered for £14 so only 2 missing now!

Bit of a stretch saying it's awful. It may not be up to the 1st's standards, or have the visual polish of the 3rd, but the 2nd game is still a hell of an experience.
12th Jan 2019

For what’s its worth, 2 is my favourite of the trilogy. It gets a lot of heat from fans of the series, but I personally found it the most enjoyable to play.

i imported this from Japan so am a little miffed they’ve now announced it...the omission of a Eu launch was ridiculous to begin with. That said, I don’t believe this has the steel book, so at least that’s one positive of paying double this price
12th Jan 2019
The only one missing for me is Dark Souls 1 and I donit have the DLC for 2 I think, I will probably get this when it hits 10.
12th Jan 2019
Finchy is still waiting for a chapstick deal
12th Jan 2019

Where did you get the remaster for that price? :O

This game any good?

I’m in the minority with you here.
While I can see and to a certain extent agree with why it’s the worst of the lot it is my personal favourite!

It’s the one I’ve played from beginning to end the most and it has the most varied DLC. Love every second of it, wait, apart from the Smelter Demon and Shrine of Amana! *shakes fist*
12th Jan 2019

Indeed. I played Dark Souls after watching ny brother-in-law start the game and went out and got the Prepare to Die Edition and loved and loathed every minute!

Picked up DS2 on release in the Black Knight edition and found the game to be as amazing as the original even if not as clever in map design.
The DLC was tough - only played it originally once at NG+ and found all of the DLC final bosses tough. Never beat the Blue Smelter Demon and only tried the twin cats a few times. Elena was my nemesis, took ages to beat her.
On New Game however, she is not challenging at all.