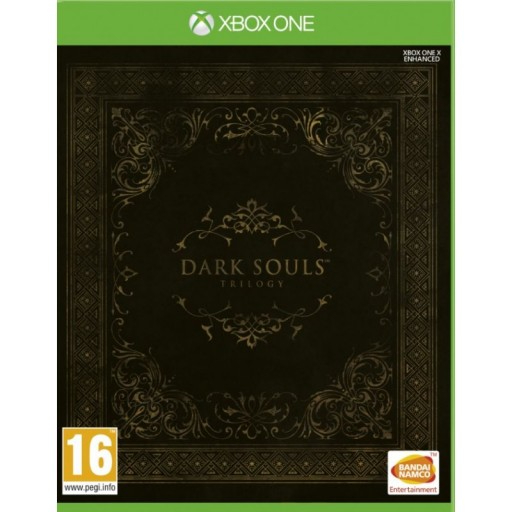 Edit: Thanks @Brutes for the heads up.

DARK SOULS™ REMASTERED - Then, there was fire. Re-experience the genre-defining game that started it all. Return to Lordran in the beautifully remastered game in high definition, 60 fps with single-player or online multiplayer with dedicated servers. Includes the Artorias of the Abyss DLC.

DARK SOULS™ II: SCHOLAR OF THE FIRST SIN - Prepare to Die again. The second installment of the series includes the base Dark Souls II plus all three DLCs: Crown of the Sunken King, Crown of the Old Iron King, and Crown of the Ivory King.

DARK SOULS™ III: THE FIRE FADES™ - Now only embers remain… Dark Souls III is the final journey in the series where players can fight through intense combat solo or team up for in co-op or PvP multiplayer. Includes the award-winning game and both DLC chapters: Ashes of Ariandel and The Ringed City.

ALL ORIGINAL SOUNDTRACKS – Visit the EP!C corner to download the music of the Dark Souls saga composed by Motoi Sakaraba and Yuka Kitamura. 110 tracks and more than 6 hours to listen and take back any Dark Souls fan to the intense boss fights and the best moments of their deadly journeys.
PostTweetShare Share with WhatsApp Share with Messenger
Community Updates
The Game Collection DealsThe Game Collection promo code
New Comment SubscribeSave for later
11 Comments
19th Jul
If only I had the time to git gud.
Edited by: "aperfectm" 19th Jul
19th Jul
Just a warning... Virtually no other online players... Can sometimes wait hours and not get summoned (even if relevant Soul Level/Memory)
19th Jul

DS3 is absolutely fine in this regard - summoned and can summon all times of day, every day.
19th Jul

Its 99.5% a single player game so wouldnt worry about it
19th Jul
Nearly bought this from ShopTo yesterday for £32.95, glad I waited!
19th Jul

I have run through all three games over the last few weeks and had no issue summoning or being summoned in any of the games. DS:R and DS3 were both very active, DS2 not so much but even then it was small waiting times. Have you changed your matchmaking to Global?
Edited by: "OllieFTH" 19th Jul
20th Jul
These games should be a part of school syllabus.
22nd Jul

Its 99.5% a single player game so wouldnt worry about it

It certainly wasn't for me, and summoning and being summoned is a big part of the game for a lot of players.

Yes, it CAN be played as a purely SP game but it misses a good chunk of what made Dark Souls so interesting when it was first released.
22nd Jul
Play through these games every so often, cant say I've ever really had a problem with multiplayer, granted it's not as full of players as it used to be.

Get some of your friends to play, call it drunk souls. Drink every time you die, everyone else drink whenever you complete a boss.

Sounds stupid, but it can make a really good night if you havent got much else to do.
28th Jul
Well worth it I've not played but dark souls 2 complete is £20 on 360 and 1 is £6s it's a no brainer for me