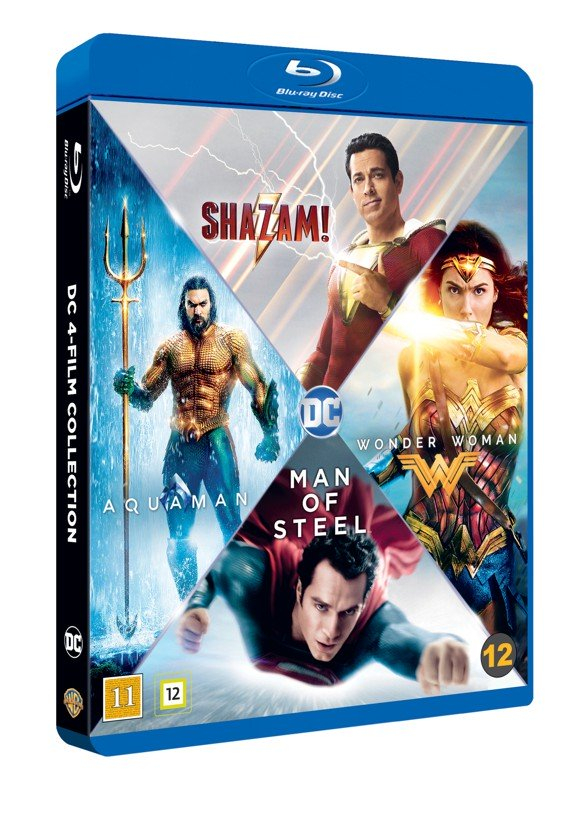 Zachary Levi stars in this US action adventure based on the DC Comics character. Teenage orphan Billy Batson (Asher Angel)'s life is changed dramatically when a wizard gives him the power to transform into the adult superhero Shazam (Levi) with the uttering of a magic word. As he adapts to his new identity and learns how to harness his powers, with the help of his foster brother Freddy (Jack Dylan Grazer), Billy finds himself up against Dr Thaddeus Sivana (Mark Strong), who is jealous of Billy's status as the chosen Champion of Eternity and out for revenge.

Jason Momoa stars as the DC Comics superhero in this action adventure directed by James Wan. Heir to the throne of the underwater kingdom of Atlantis, Arthur Curry (Momoa) is raised on the surface world by his human father and trained by Nuidis Vulko (Willem Dafoe) after his mother, Queen Atlanna (Nicole Kidman), is forced to return to her kingdom. When his half-brother Orm (Patrick Wilson) declares war on the surface, Arthur reluctantly embraces his destiny and embarks on a quest with fellow Atlantean Mera (Amber Heard) to find the Trident of Atlan and reclaim his rightful place as King of Atlantis.

Patty Jenkins directs this action adventure film starring Gal Gadot as the eponymous DC Comics superheroine. Raised on the island of Themyscira, young princess Diana (Gadot) has been trained in the fighting ways of her fellow Amazon warriors, despite the best wishes of her mother Queen Hippolyta (Connie Nielsen) who sought to shield her from combat. As she begins to learn the true extent of her powers, Diana and her fellow Amazons are thrust into battle when American pilot Steve Trevor (Chris Pine) crash-lands just off the shores of Themyscira, pursued by the might of the Germany military. When Steve tells them about the First World War, raging across the world, Diana suspects the god of war Ares, whom Zeus has protected the Amazons from, has returned and sets off to London with Steve to put an end to the bloodshed of the Great War.

Zack Snyder directs this action adventure feature, produced by Christopher Nolan and based on the DC Comics hero. After being sent to Earth by his parents to prevent him from dying in the destruction of his home planet Krypton, an infant boy is taken in by Kansas farmer Jonathan Kent (Kevin Costner) and his wife Martha (Diane Lane), who name the child Clark. Growing up, Clark (Cooper Timberline/Dylan Sprayberry) begins to discover the true potential of the superpowers he possesses but with this comes a sense of responsibility. In his 20s, while exploring the nature of his origins, Clark (Henry Cavill) meets and later becomes romantically involved with Lois Lane (Amy Adams), an inquisitive reporter from 'The Daily Planet' newspaper. When an evil force threatens the Earth and its inhabitants, Clark resumes his true identity as a superhero and fights to save the planet. Michael Shannon, Russell Crowe and Laurence Fishburne co-star.
PostTweetShare Share with WhatsApp Share with Messenger
Community Updates
Coolshop Deals
New Comment Subscribe Save for later
5 Comments
15th Feb
Great price, might order as I've only got man of steel. Then again, I've got too many blurays still in their wrappers. Decisions decisions...
15th Feb

I've still got DVDs in their wrappers...
15th Feb

I've still got DVDs in their wrappers...

Hate to break it to you but DVDs aren't modern. I remember buying my first dvd 20 years ago at uni! Damn am I that old...
16th Feb